Yes we’re in the middle of a protracted election campaign in Australia. Still 2 weeks until election day. I don’t want to show political bias so I thought I’d do a post that combined both major parties, the Liberals (right wing) blue and the Labour Party (left wing) red. So without further ado the red and blue room post!

And mustn’t forget the Greens who will probably hold the balance of power in the Senate. 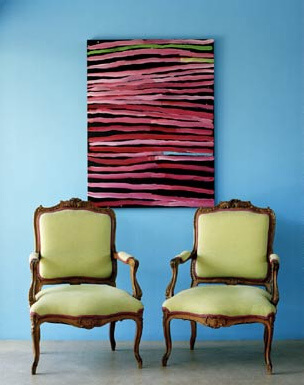 Take the time to check out these super talented photographers’ sites. I’ll be singing their praises in detail soon.

I looooooooove the chaise in the first photo, and all the colours in that space. Very yummy.

ha ha..this is so much fun, and very creative Jo! I never thought politics will find its way through to a design blog 😉

Red is my fav colour at the moment *wink wink*

Seems like you and I have similar tastes apryll annie 😉

All Things Bright and Beautifu says:

Jo, you are a classic – what a great post!!
If only elections were as lovely as these pics.
The Greens at the end make me laugh!!!

My favorite picture (not party) is the first aqua & red striped sofa!!!

A Brooklyn loft by Pappas Miron