Marija is an architect and interior designer from Lithuania who remodeled her apartment last summer and wanted to share it with our readers. The space is only 60 square metres and due to the economic and real estate crisis, her grandiose plans needed to be downsized so she opted to spend only 700 EUR and do the work herself (well, with one visit from an electrician and one from a carpenter) – in six weeks. I am blown away by every single thing she has done to her place and the little touches here and there that came it really special. It’s a spectacular transformation and I am excited to show it to you all. I’ll take you on a tour of Marija’s home room by room, in her words.

The living and the dining room. I peeled away the prior floor sheets and I painted the floor boards in white and ivory colour strips according floor board step – that visually made space wider and brighter; renewed and painted the ceiling; two doors leading to bedrooms were repainted in black chalkboard paint. I also decided to have a ‘window sills’ above the window and two alcoves in opposite wall – now their serves as an exposition space for wooden sculptures  storage space and a curtain-rods holder for curtains to mask the storage in alcoves and decorative curtains beside the window. 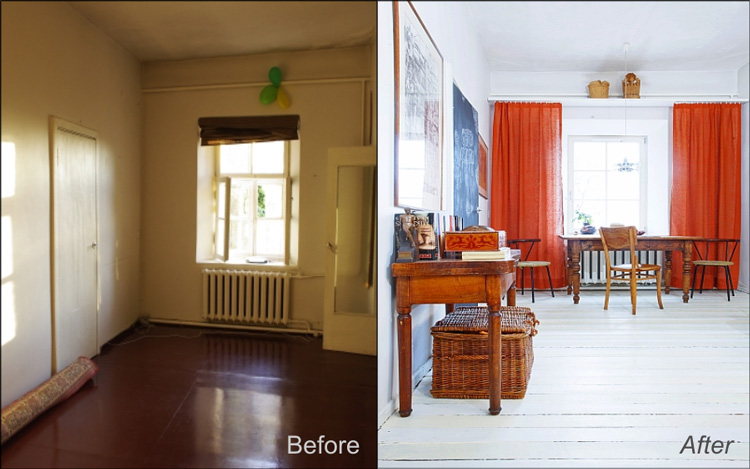 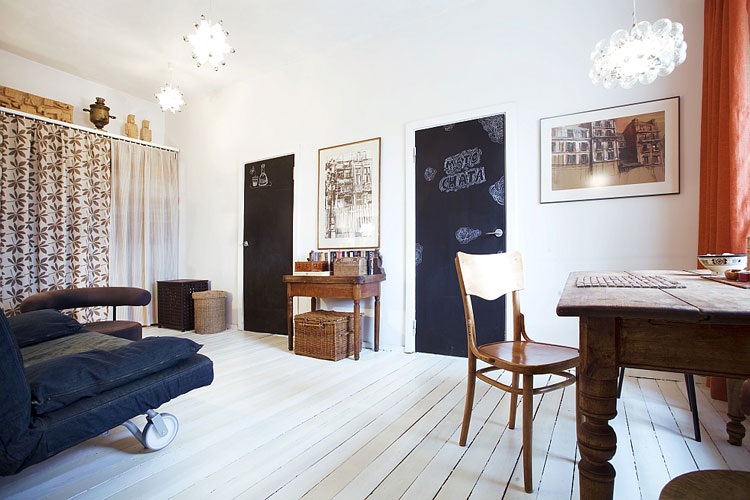 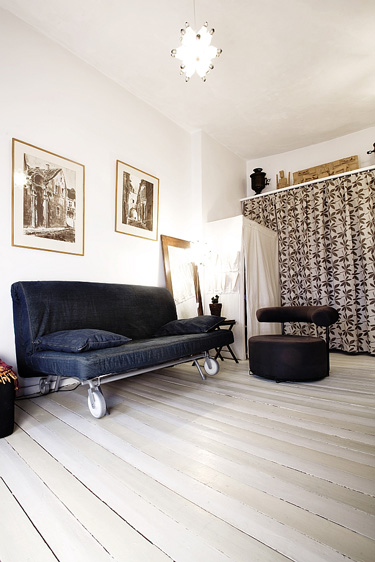 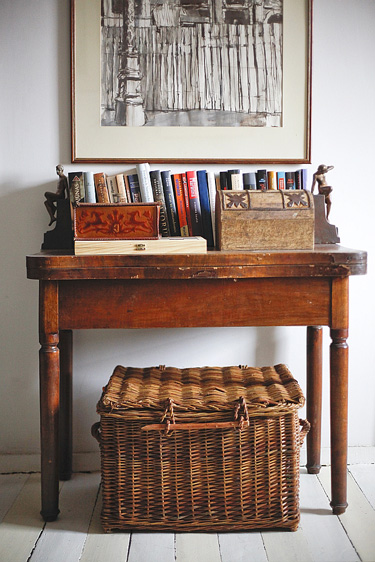 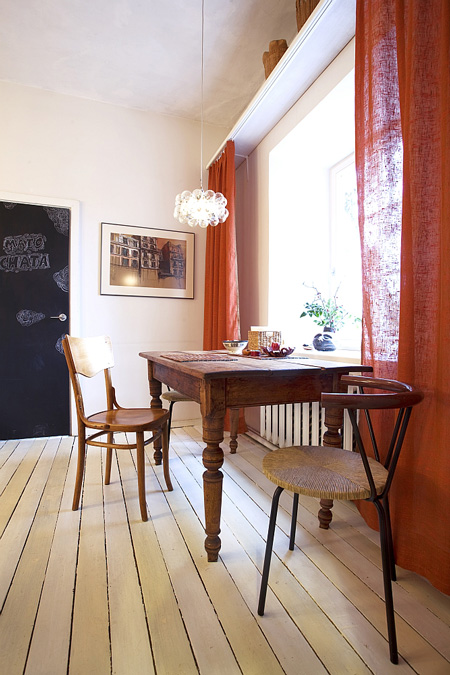 The kitchen. In the kitchen, I had to peel off four layers of old vinyl coverings:) The unimpressive back wall of the TV table that did not fit anywhere I covered by the plexiglass cover and applied a wall décor sticker and it has transformed into my favourite kitchen island. The similar sticker appeared on the entrance door and small refrigerator. The rest of the doors of the room were painted black with chalkboard paint to be covered by chalk drawings. 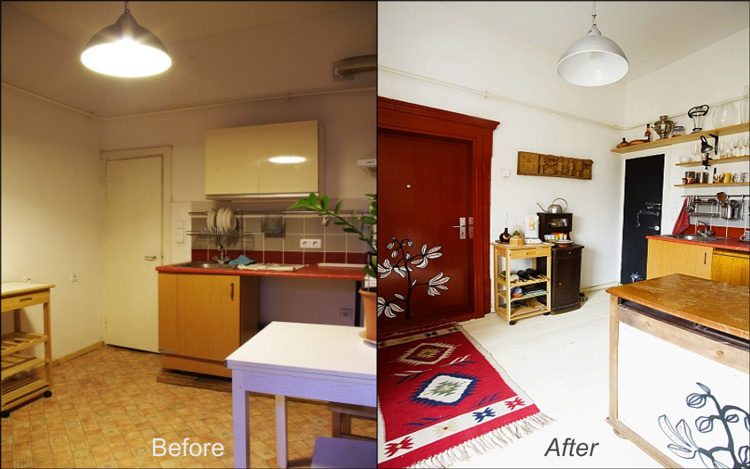 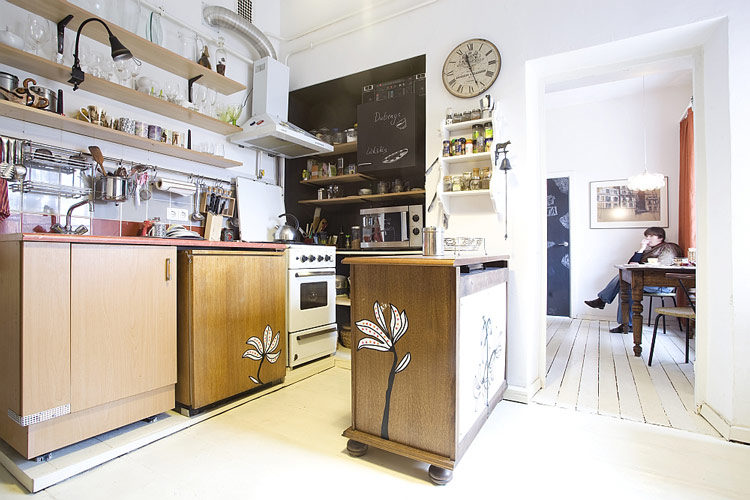 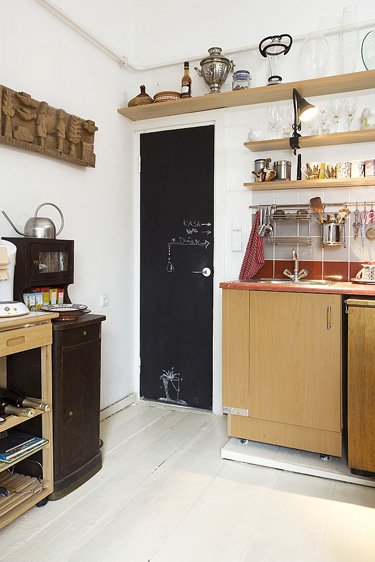 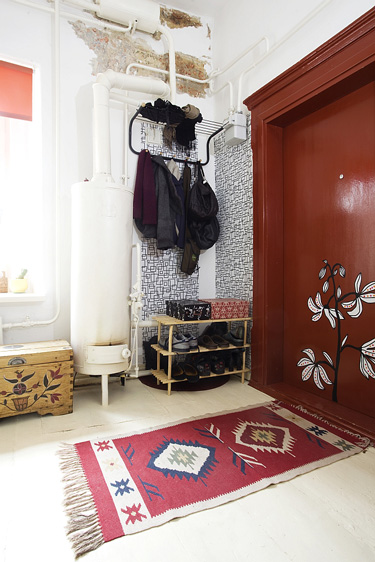 The bedroom. When I started removing the old wallpaper, I found out fragments of previously used paints that seemed to me very attractive. Thus I scrubbed two walls to uncover the previous décor. And decorated the other two walls (which were built in later years and there was no hope to find any interesting decors on them) with diluted cotton and silk wallpaper mass. I also renewed the ceiling and painted the floor boards that were previously covered by carpeting. 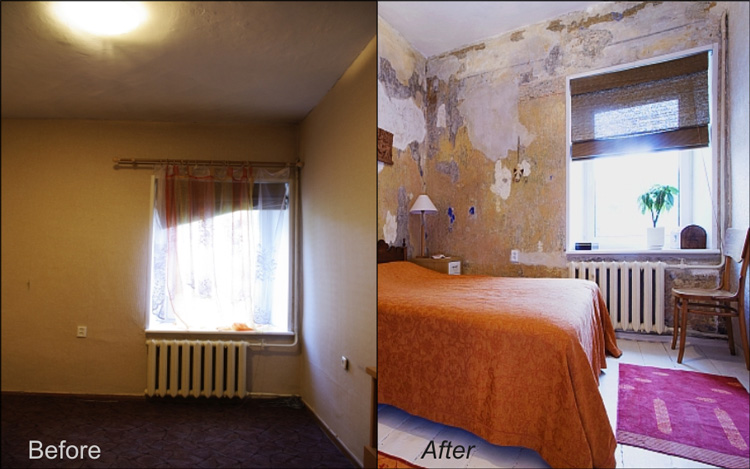 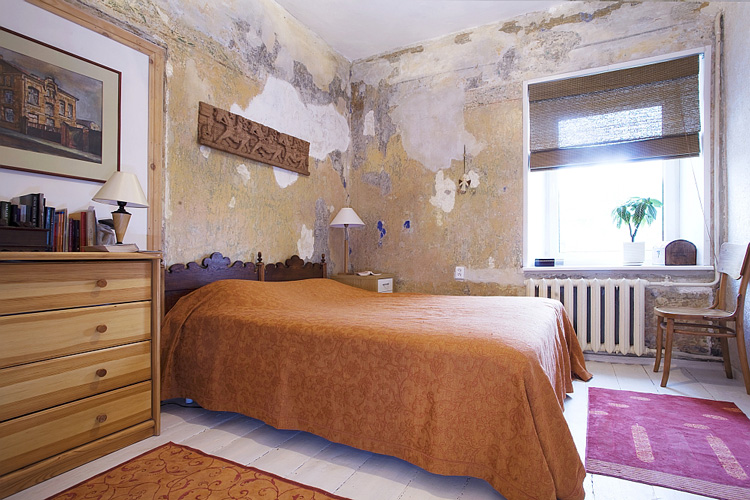 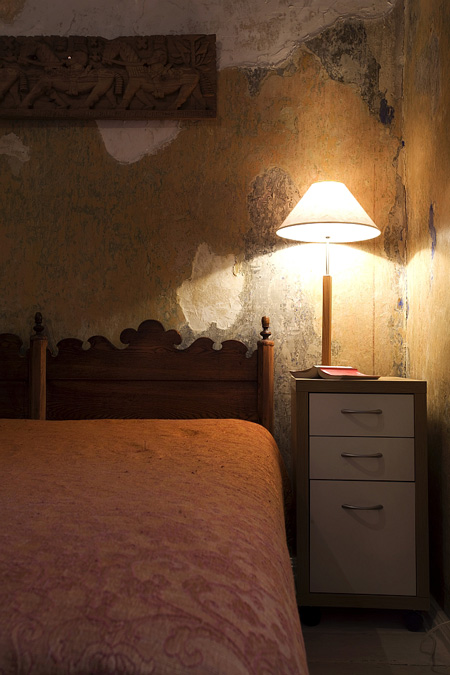 A child’s room. In my son’s room I also renewed the floor, the ceiling and the walls, though for wall decoration I’ve chosen a simple method – I painted white the existing brownish rugged wallpaper. Instead of the carpet we used a stencil of a stylized whale while my son got creative and decorated the legs of the old stool in the same manner. 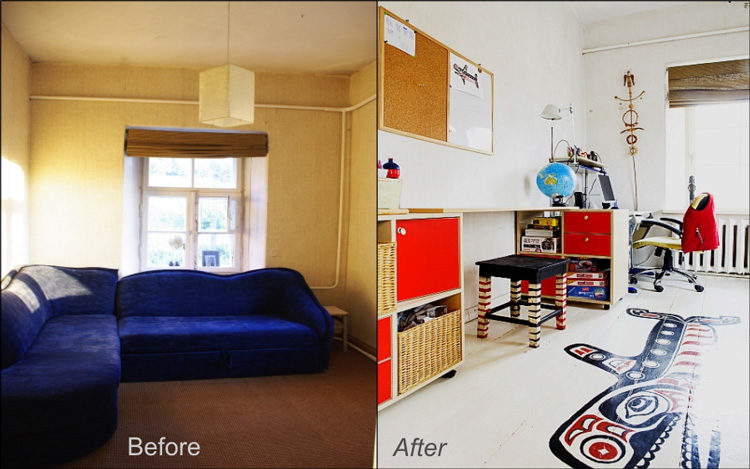 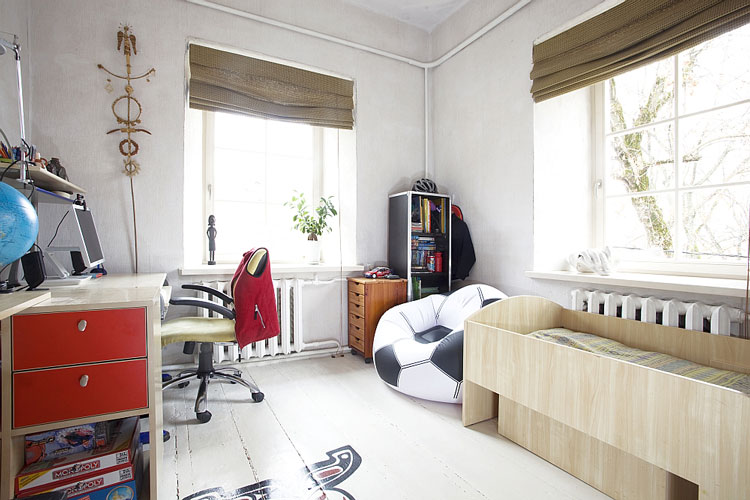 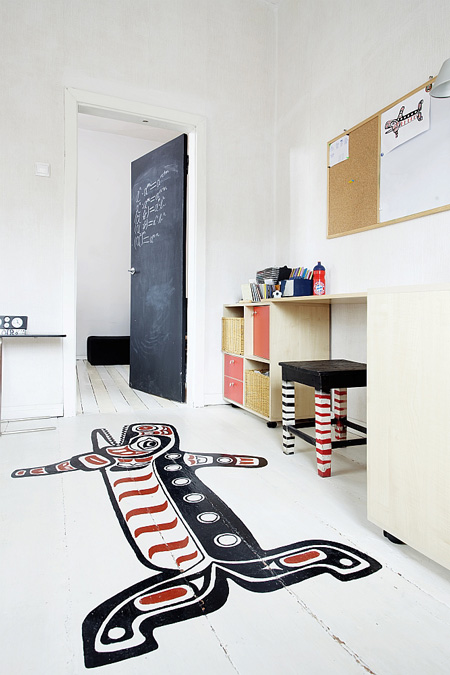 Marija also included some photos of her bathroom, one of her amazing light fixtures and a floor plan. 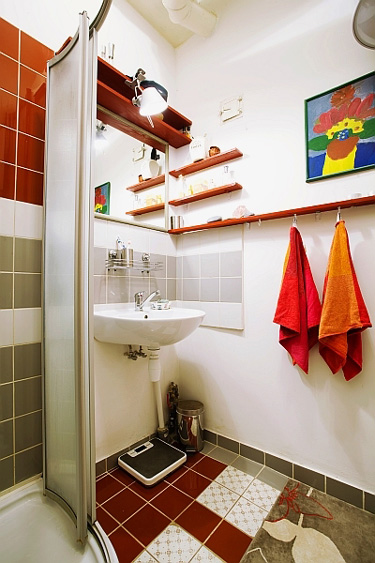 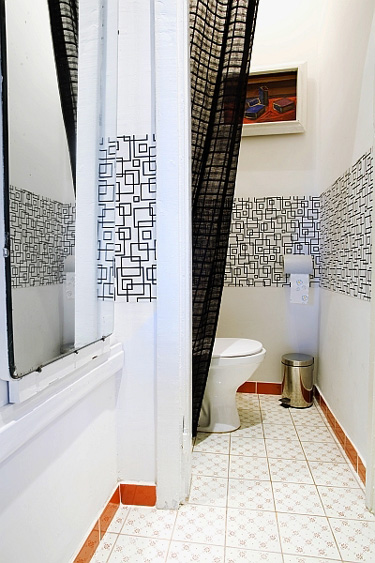 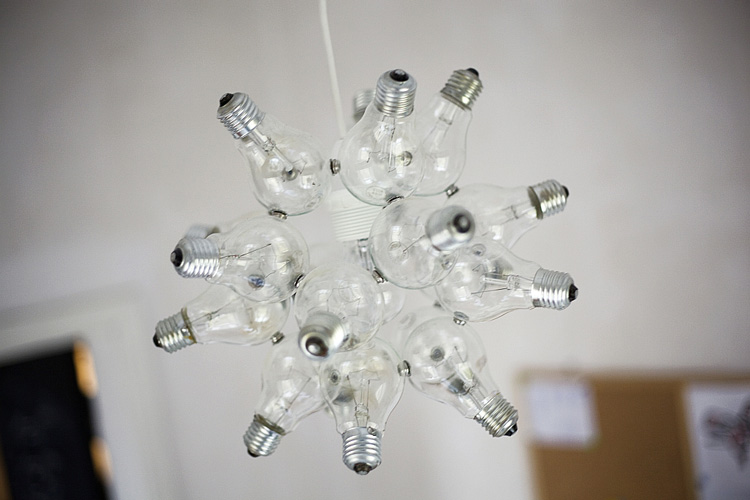 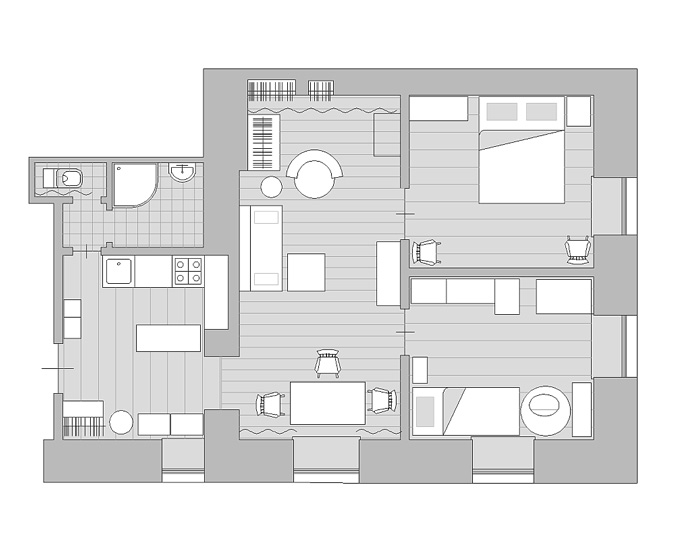 LOVE the layers Marija has revealed on the master bedroom walls. It's brings a beautiful and historic personality to the room. That and the use of warm oranges have to be my favourite features of this 'new' apartment but overall, just a gorgeous space!

Fabulous makeover! So many good ideas to take away.

You always post the best before and afters! More, more, more!

Fabulous transformations! Love everything you did.

I cannot say enough nice things about this apartment – the personality is so evident without being in your face and even though Maria had to really work with what she had, all the proportions are great. This beats most of the affluent concrete floor , wood clad, bubble lamp clones hands down. Well done

Wow, all this on 700 EURO's?! I'm very impressed!! Congrats Marija – you should be very proud xx

What a fantastic use of this space. I love the use of the wall decals to jazz up the kitchen cabinets.

I love this home, great before-after

This is wonderful. Love the white living room with the bright curtains and dark warm wood. Tons of inspiration here, great job.