Here is an email we received from a reader named Mari: “I have the world’s smallest bathroom. I tried a couple of things, but nothing’s seem to work in it. The worst thing it’s not its small size, but how the things are put together. I even had an architect to take a look, but there was no way to change the things out of their original place. The bathroom is 83cm x 2.40m. The shower is 80x80cm. I was wondering if you can get me some ideas.” I honestly don’t know what to say about this because it really is T. I. N. Y. My advice is blow out a wall but I’m guessing that ain’t gonna happen. An architect friend of Mari’s said that it would be possible to blow out the wall on the left, but when it was time to do it, it was discovered that that was some kind of building regulation against it. So if you guys have any ideas for Mari, fire away! (P.S. I did a “small bathroom” reader request a couple months back but I’m not sure that post would even help in this case). 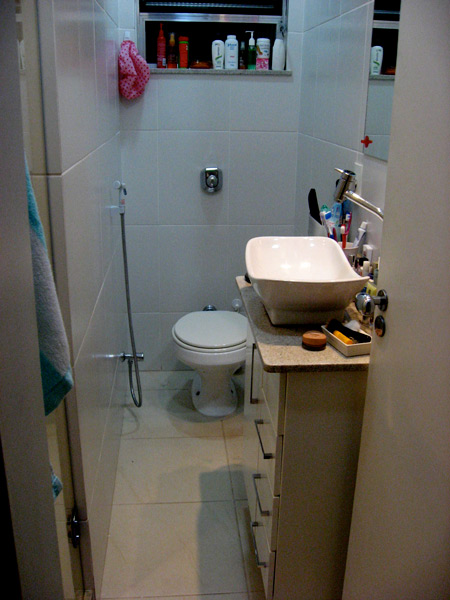 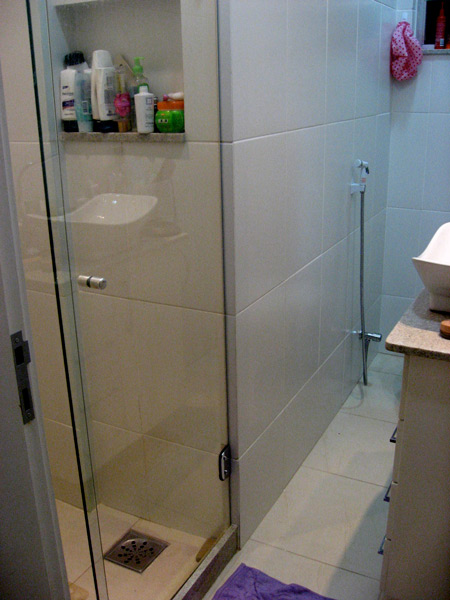 Oh, and if you can, remove the door and install a pocket door. Doors are often the last thing people think of when trying to create the illusion of more space

We have a tiny bathroom as well, though it's bigger than yours! I would definitely nix the pedestal sink idea. Sure it's pretty, but it doesn't allow for storage and in a small bathroom that's a big requirement. We're taking out our pedestal sink and replacing with a Lillangen sink from IKEA (http://www.ikea.com/us/en/catalog/categories/series/15288/). They're only 16 inches/41 cm deep and come in three different lengths. They have a lot of storage for such a small space and will free up a lot of space.

For additional help, try a mirror over the toilet. That should visually open the space a bit.

Pedestal sink and shelving for storage. The cabinet takes up way too much space and a pedestal would immediately make things seem larger. Moving the storage up onto storage instead of on the floor in a cabinet woud open up floor space and give you more room. I also like the idea of a folding or even sliding door if it's possible.

I think it is simple, and some of the above comments have hinted atnit.

But I would remove all the unecessary items and make the entire space a wetroom., with the shower head on the ceiling. As long as you can store towels immediately outside ( sliding door) that's all you need.

Treat the space as a giant shower (with loo) rather than a small bathroom.

If you're going to replace the tiles on the wall… put them horizontal. No busy patterns, plain white will give you the most spacious feel… keep colors to a minimum… just white and a little gray/black for contrast. Then add a bit of color (just one) with your towels, accessories, etc.
Hanging toilet also helps, and is easier to clean under.
Make door opening outward, instead of inward.
And get rid of all the bottles, etc. Just keep the bare minimum… preferably all in one color.