Tanya owns a home remodeling company, and needs a bit of inspiration for a bathroom project: We want to install a shower in a narrow bathroom with a large south-facing window at the end away from the door. The room is a standard size bathroom that would hold a shower/tub, toilet and sink about 5 x 8 feet I am leaning toward tiling the whole room and sloping the floor toward a drain under the shower. I want some minimalist enclosure ideas which will allow the maximum light from the window to fall into, and through the room when the door is open. Many designs would compromise the window with a clunky shower surround. The main trade off I see is to encourage at least the majority of the shower water to end up in the drain, before coating everything else. Simplicity is a plus. The window will probably be replaced, so it will be able to get wet, (ie, vinyl.) Any thoughts? And pictures?

Here is a photo of the bathroom in it’s current state: 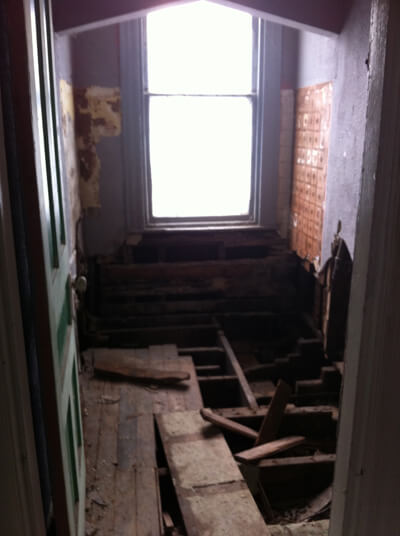 YIKES. I’d say it could use a bit of work. 🙂 I personally am a huge fan of seamless floors in a bathroom where, as Tanya is suggesting, water flows into a floor drain. Tanya also sent along a couple photos of bathrooms she found on DTI that lead her to the idea and inspired action. 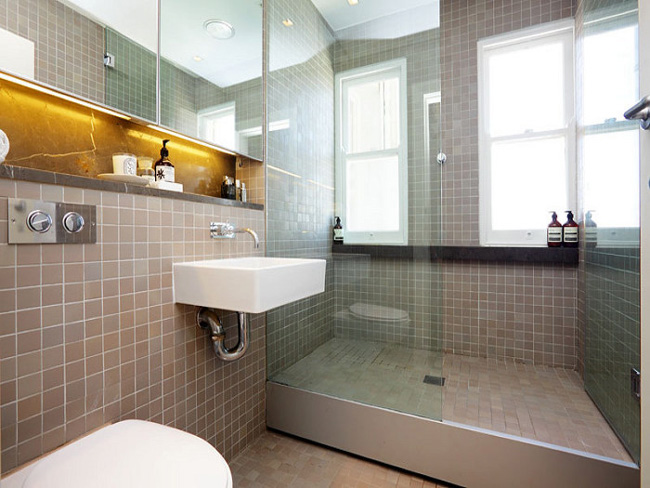 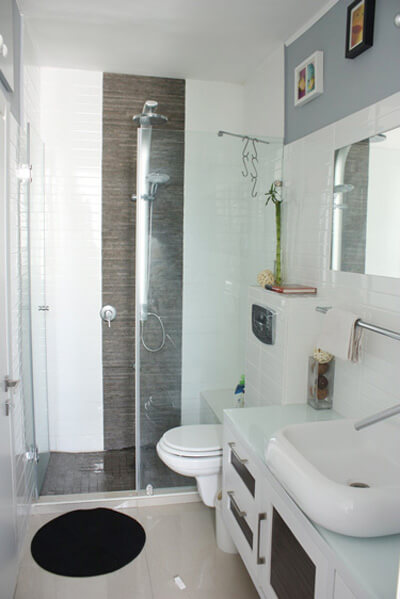 I found some photos of bathrooms set up like this, as well as some with more separation for the shower, and I tried finding as many examples as I could of these with a window in the shower area. Hopefully these help! 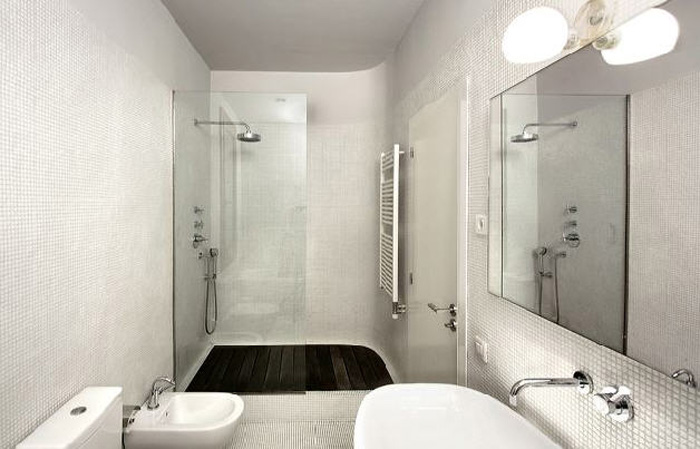 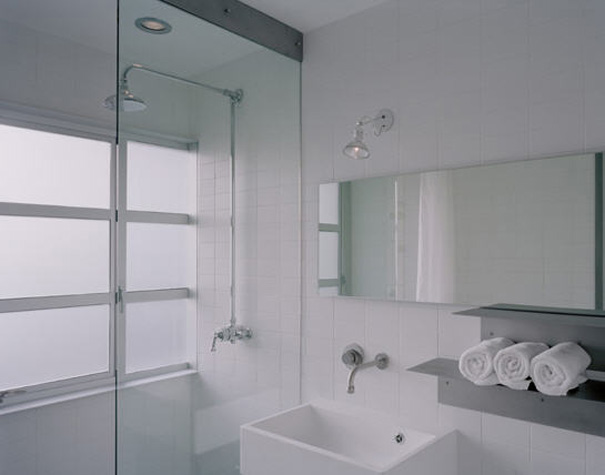 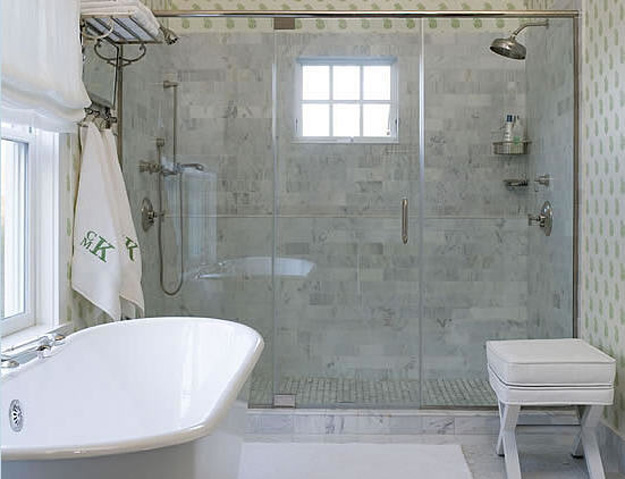 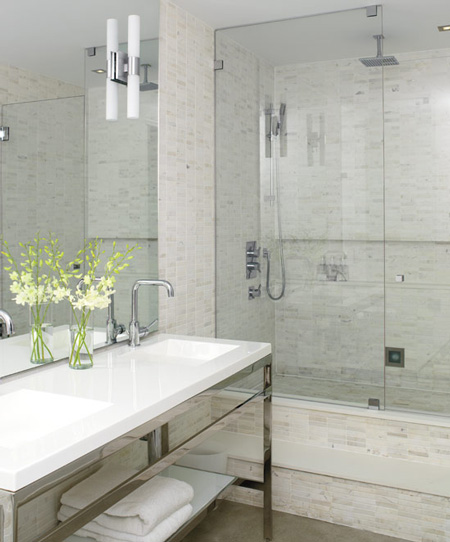 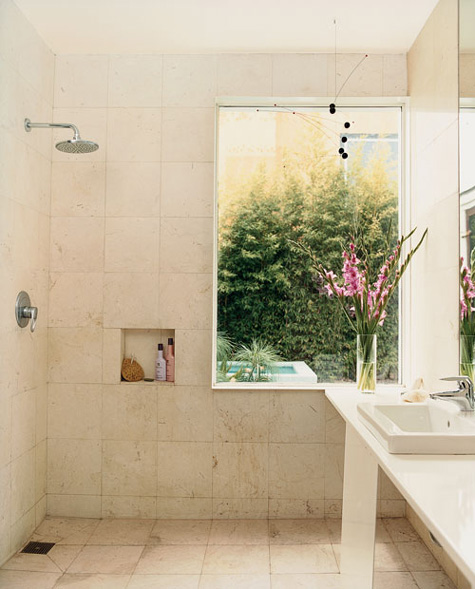 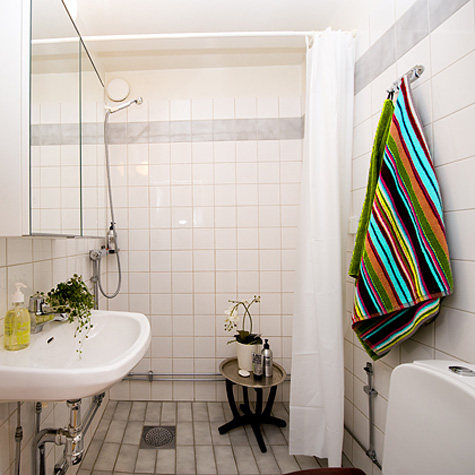 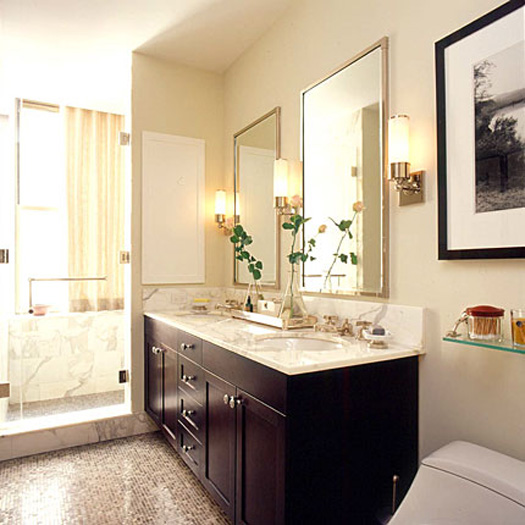 The one thing I don't see mentioned or pictured is a trough drain. I'm seeing it called trench drain and channel drain, also. http://www.myshowergrateshop.com/ We plan to do this in our shower remodel soon, with the tile insert option.

THIS is what we did with a similar looking project (bath with window). Hope it can help!

Those are some beautiful bathrooms. As an old house lover, I have to say please don't replace the window unless you absolutely have to. New windows, especially vinyl never look right on an old house. That being said, I like the look of the one that uses a white curtain in front of the window. You could use a nylon shower curtain so that it is water proof but still fabric and pull it open when not in use to maximize light in the room.

Looks a lot like out current reno!
We have a platform 'wet area' at the back containing a recessed bath and shower with a channel drain and a half glass wall. Also, we moved the door opening to the centre of the wall (instead of the left) which allowed us to run a bench with vanity along the left and the toilet behind the door on the right.
I can't tell you enough what a difference moving the door made!

What about using glass bricks (or glass blocks) as a shower screen?

Kim, thank you. You and Jo just astound me with all these images.

I love the simplicity of the Tom Atwood and the Marie Clare Maison. I have an old house, too and replacing the window sashes with vinyl is not noticeable. If you want to save the wood frame and sill, you can use a high-quality marine finish on them.

Thank you so much for this inspiration. I will be sure to send you the after pictures.

An industrial loft in Vancouver