I’d like to dedicate today’s pets on furniture posts to Tom, my latest stray who sadly lost his life Friday. I wanted to share his story, as traumatic as it was for me, because if I can get even a few people out there who come across a stray animal in need to do what they can to help, then I can feel Tom’s death wasn’t for nothing. Because it hurts alot that I wasn’t able to help him in time. 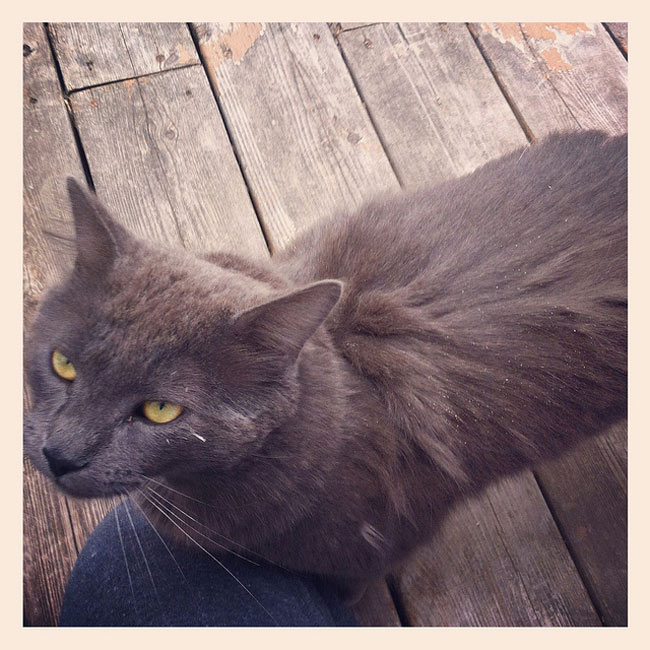 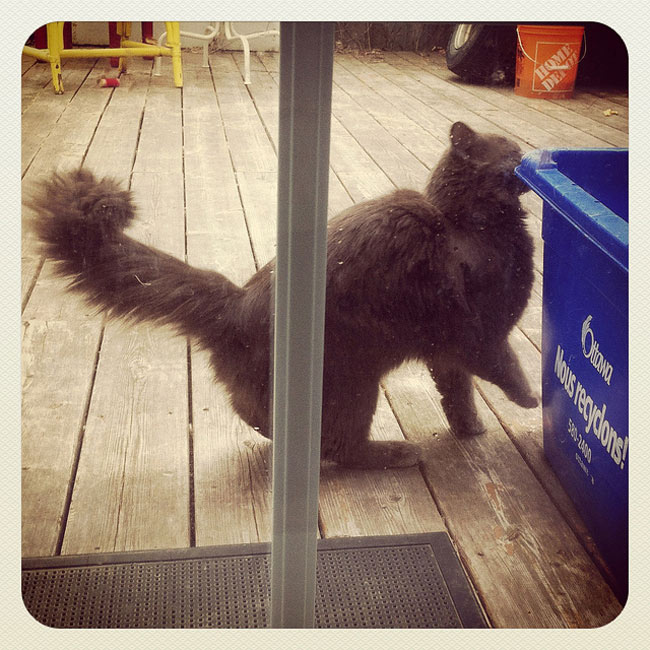 Friday I didn’t go to work due to an excruciating muscle spasm in my neck. I really believe I was meant to be home that day. Tom started visiting us in the winter, coming by randomly. Then about 2 months ago he suddenly decided he liked us and started to come by twice a day, for breakfast and dinner. He let me pet him until I gave him his food, then would take off to go galivanting in my ‘hood, looking for the ladies (he wasn’t neutered). Then about a week and a half ago he stopped showing up. I was really worried about him. Suddenly, Friday at noon he showed up. I looked outside and saw him laying on the driveway with his head down. I knew something was wrong. I grabbed some food and went outside to find him very lathargic and not interested in eating at all. His back end was crusty and he smelled like pee (he was usually a pretty well kept cat for a stray). All he wanted to do was sleep. I noticed his nose was runny and he was shivering. I called the vets and told them I had to bring him in ASAP. While waiting for my husband to show up I brought him inside into my powder room (away from my 7 cats) – he was totally unphased by this, put his head down and tried to sleep. He had never been in my house before so I knew he was really sick. When we got him into the cage, he started shaking really badly (from shock) and we realized he was worse off than we thought. We rushed him outside where he started making odd noises and then stopped breathing. I broke down, and then when I went to double-check his breathing I noticed he was breathing again. We raced him to the vets and on the way he was gagging and choking and having a hard time breathing. He was basically dying in my lap. The vet is luckily only a 5 minute drive away but they could not save him. He had a blocked bladder – it was huge and filled with blood. This caused kidney failure. He didn’t have a chance. I honestly think he showed up in my driveway that day to die, with us, because we were the only ones who cared. I know we did what we could but I can’t help but feel guilty that we didn’t try sooner to get him off the streets and find him a home. He would have made a great pet.

I had a sinking feeling this wasn’t going to end well, so I snapped a photo of Tom in my bathroom while I waited for my husband to get home.
He deserved better – he deserved to live. Tom, love you buddy. I’m so sorry. 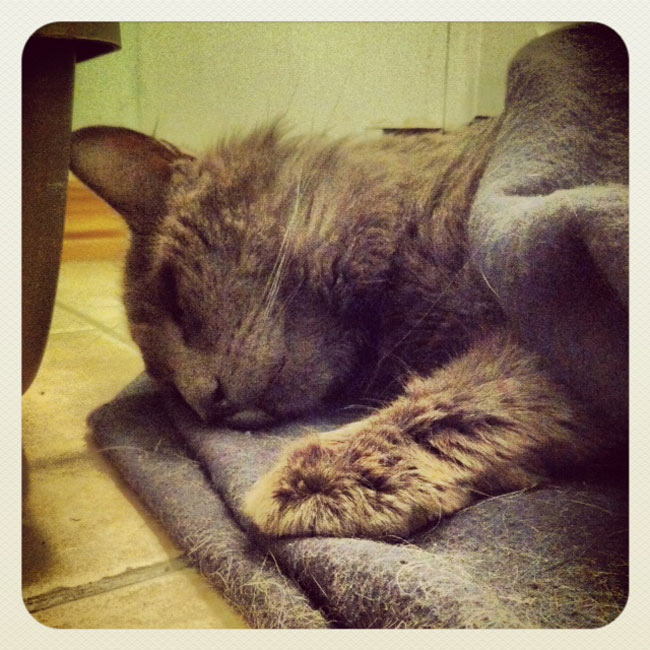 Thanks everyone. You guys are making this alot easier.

And a big thanks to Emma, for leaving a sweet comment along with the others, for being a great vet, for understanding how nuts my husband and I are for these furry little monsters, and for doing all you could for Tom.

We are all mad. HOW WONDERFUL!

So sorry to hear of Tom's passing, Kim. God bless you and your hubby for feeding and befriending him, and trying to help him. Thank you for sharing his story – unlike so many poor kitties, he didn't die nameless and unloved.

you did wonderfully by Tom. This is why he came to you in the end. Cats have to do everything on their own terms..so independent. that's one of the reasons we love them so.

we had one like this as well. i named him Roland, after the character in Stephen King's "The Stand" because he walked like a cowboy (in my mind). i have a pet door so my kids can come and go and one day i came inside to see him sleeping on the counter like he had always lived there. he came and went as he pleased, the other kids never hissed at him – strange for them. about 3 weeks later i woke up and he was sleeping on the foot of my bed. he had never gone beyond the kitchen before that. i brought him back downstairs, but he kept coming up so i just let him be. a few hours later i got up and he was sleeping on the stairs. i picked him up, he started purring and a few minutes later he just…… let go. it was sad for me, but there is a peace in knowing he felt safe enough to come in and be near us in his last days.

Oh my goodness. My heart goes out to you.
This little kitty was so lucky to have you there at the end of his life.

Your story is heartwarming and heartbreaking all at the same time – you brought tears to my eyes!

I live in France in the country and take my 2 cats with me for walks in the forest next to where I live – in March on one of these afternoon walks, another cat joined the walk – very similar looking to Tom – he was incredibly skinny with no identification – he followed me home and just wanted to come inside – so I took him in, named him Billy and nursed him and fed him for two weeks after which he was in great form again. I live in a village where the animal shelter have a no kill policy – so I took him there where I knew he would have a better chance of finding a permanent home through their system – they had him 'fixed' and 2 days later he was adopted by a family.

Tom wanted his liberty to roam still, from the sounds of it. You did what you could. You enriched Tom's life and gave him comfort in his last moments. His life was blessed just for having found you 🙂

This cat really looks like my cat except for the length of the fur… I've experienced something similar with one of the cats I adapted the first time. There was no sign of coming. He just went unconscious one day, a month after I adapted him. He was very skinny and never gained weight since I adapted him so my roommate told me probably he had been sick before he came to my house, but I couldn't stop blaming myself. Now I'm trying to think he was meant to come to my house and I hope I made him a bit happier than he was staying at the shelter.

Kim, you wrote a lovely eulogy for Tom.