If you’d like to send me photos to include in next week’s pets on furniture post, please ensure your photos follow these basic rules: First, the pet must be on a piece of furniture. And said piece of furniture must be clearly visible in the photo, so it takes center stage rather than your pet. Think of it more of a photo of a great piece of furniture that you wan t to show off…and your pet happens to be sitting on it. And second, if the photo is too dark or unfocused it may not make the cut. Photos, your name, location and a brief description can be sent to kim[at]desiretoinspire[dot]net. Thanks! 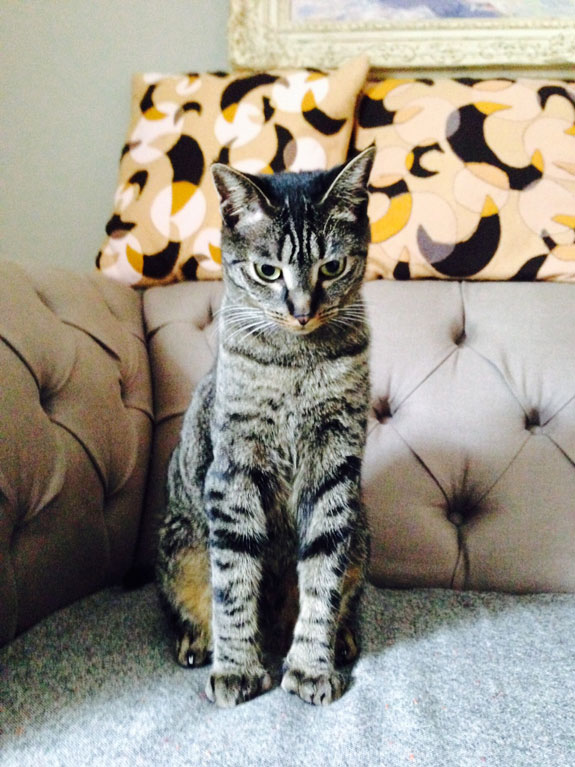 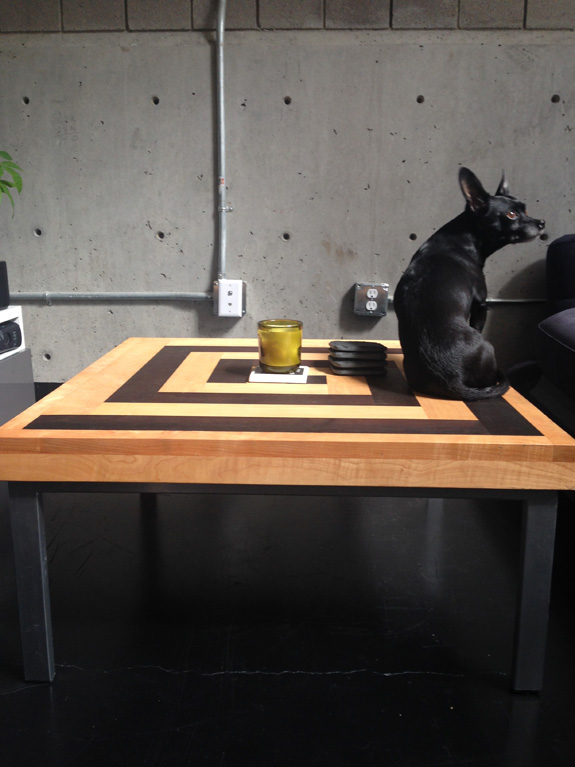 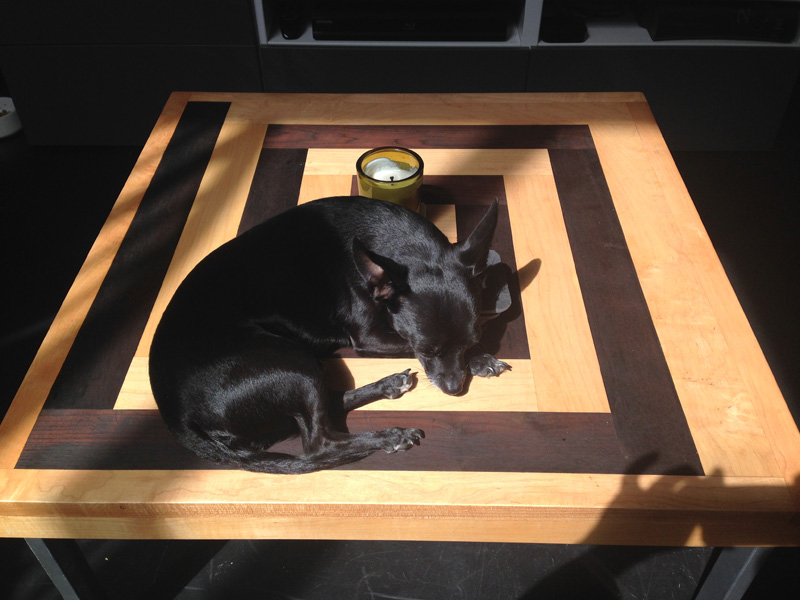 Chilli is a Bordeaux Bull Mastiff and Coco is Abyssinian X Burmese, both rescue, both divine creatures!!!
– Marta (Melbourne, VIC) 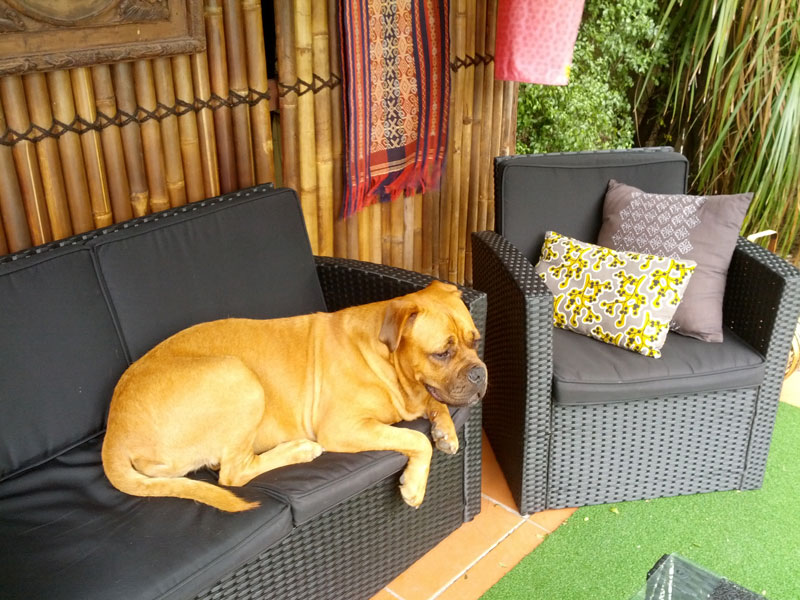 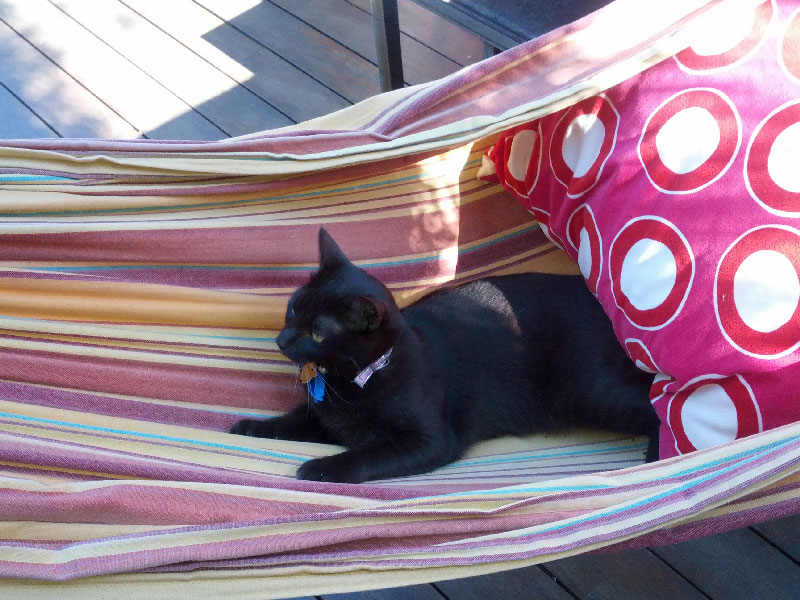 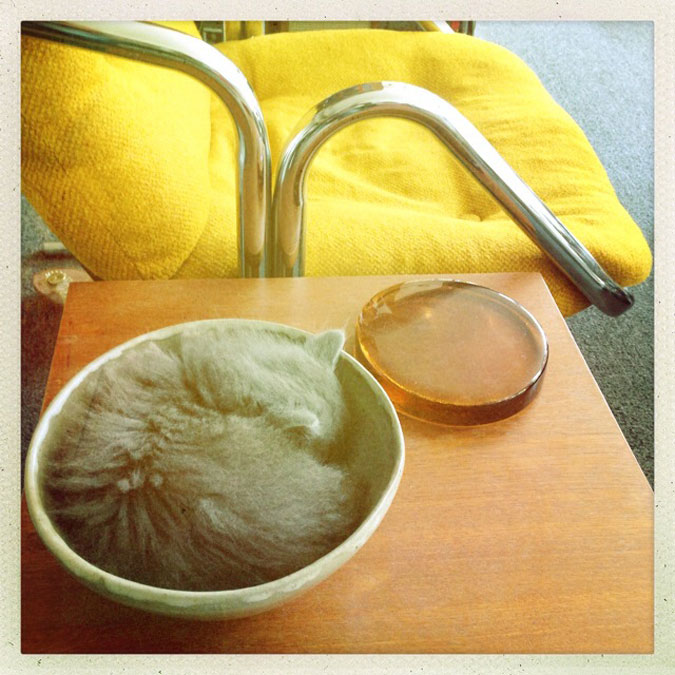 Not sure if these measure up or not.  No hard feeling if my poor photo skills and my crappy camera could not do Skillet justice 🙂  Plus, more than a specific type of great furniture (though there are some peeks to mid-century goodies) is the setting that I like.  The view from our kitchen window to our little front garden is special to us.
– Pam (Orlando, FL)
Ed: Skillet = such an awesome pet name! 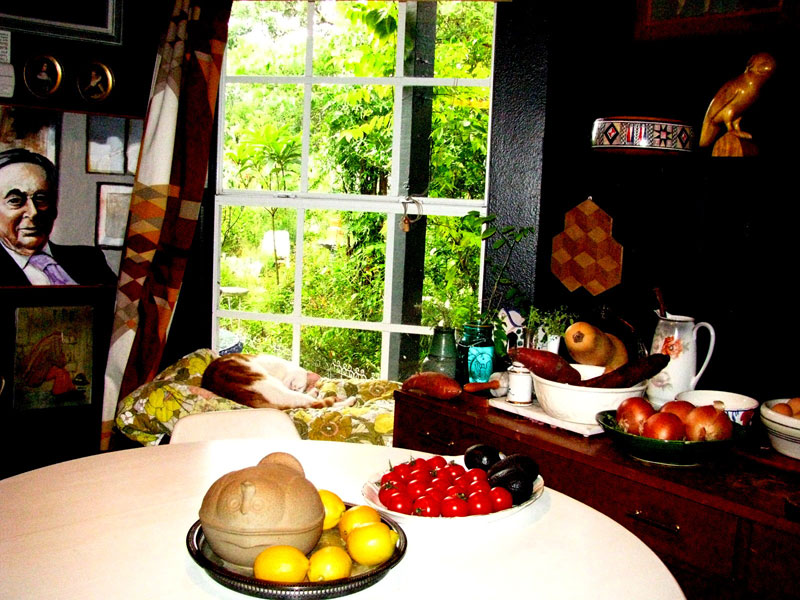 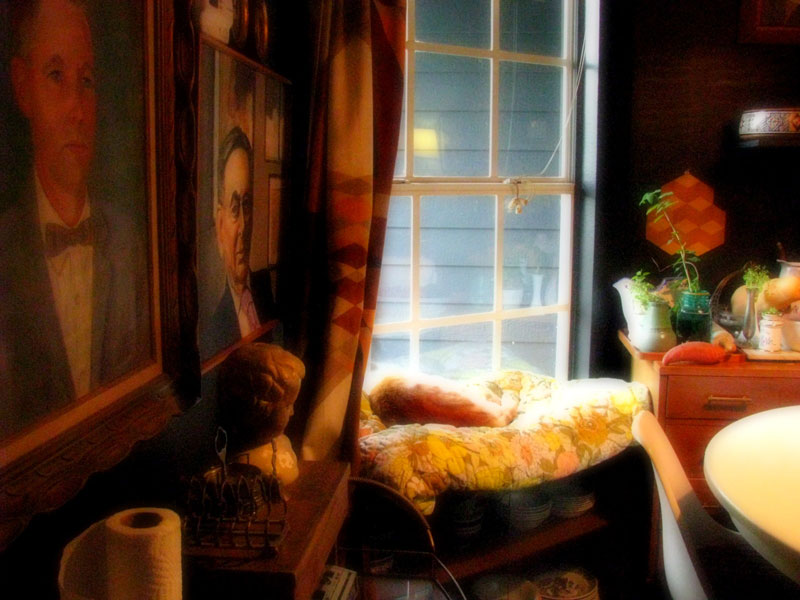 Jenny from Australia emailed me about a very special pet that I had to share with you all. Maybe you have heard of Esther the Wonder Pig who lives in Georgetown, Ontario. I hadn’t, and I am SO GLAD I now know about her. As told by Jenny: Her daddies bought her as a micro piglet – but she grew. All pigs do – the micro pig thing is a myth – people starve pigs to keep them small, but Esther is part of the family so she grew! Anyway, Esther has changed her daddies’ lives and now they are setting up a farm sanctuary in Ontario. This absolutely adorable pig went from 3 lbs to now 450 lbs and is clearly the love of her dads’ (Steve and Derek) lives. 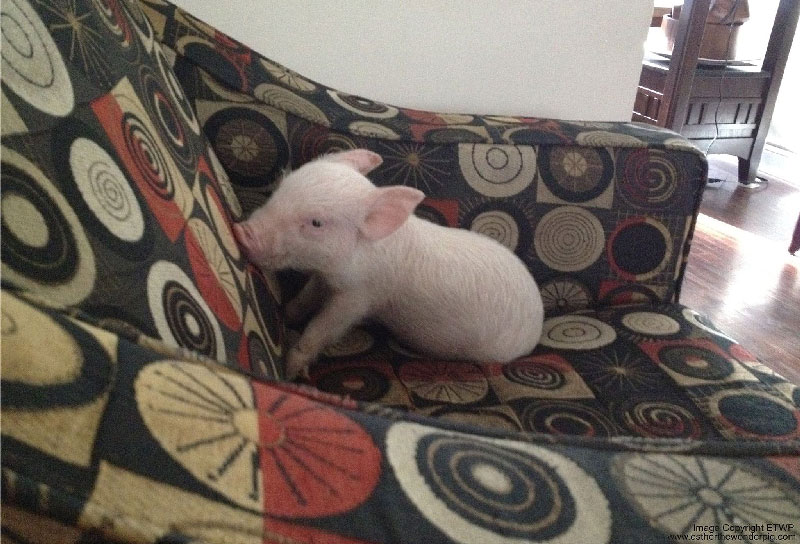 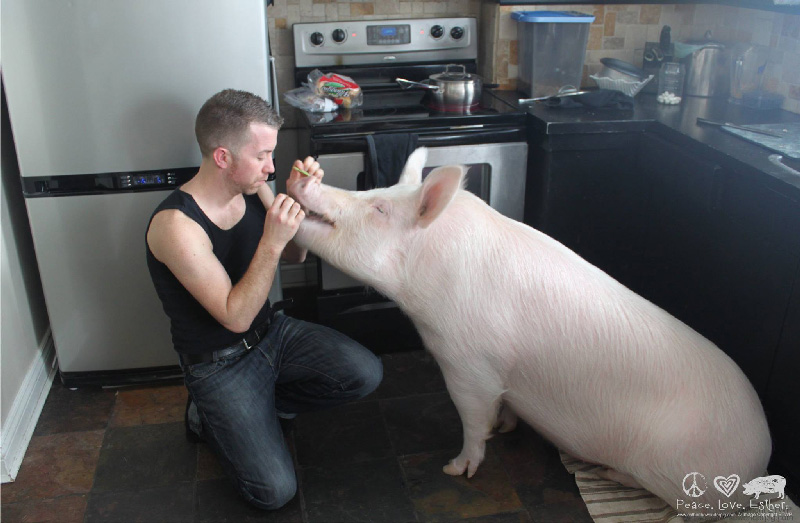 She shares their home with 2 dogs and 2 cats as well, so it’s busy and crowded! You can check out Esther’s website, and her facebook page for lots of info and wonderful photos. When they realized she was a full-sized commercial pig and had been duped, they had already fallen in love with her and could not give her up. She changed their lives – they became vegans and now their 1000 sq ft house is far too small, so they started a crowd-funding campaign to buy and run a farm sanctuary for Esther and give them the opportunity to rescue other food industry animals. Steve, Derek and Esther are amazing so please, if you can, donate to their campaign. I think they all deserve a new home, and a new start. 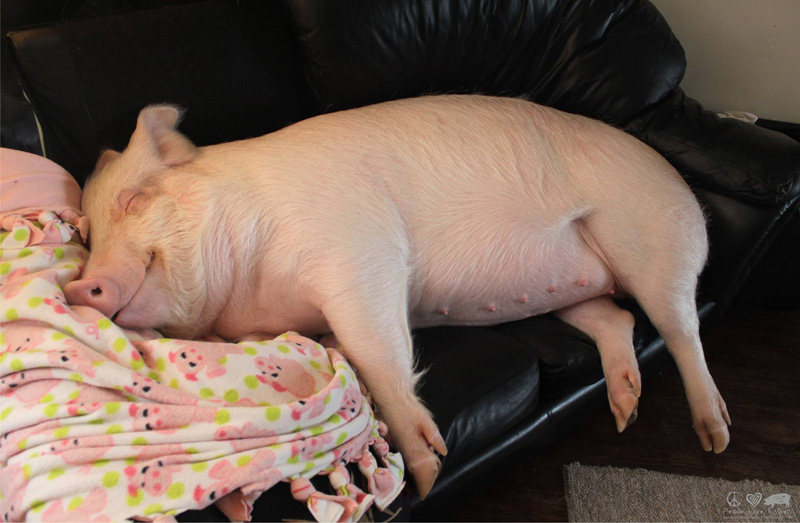 love them all says:

OMG, Esther the smiling giant pink pig. I almost spit out my coffee. That photo should win a prize or be on t-shirts or billboards selling sofas or beds. Hilarious. Nice story too. Can never see too many photos of kittens in mid century bowls. Sweet! Now Skillet is obvs. a pampered pet–those curtains are fabulous material! Chilli is hugely charming and just huge! Coco, sweet in the hammock. Lola looks like she's in charge of everything, particularly the nice chesterfield. Bowie! Cute on the coffee table. But really, Esther? Smiling Esther. Another great Pets on Furniture Monday. Peace, you all. Esther!

The photo of smiling Esther should be on the side of buses advertising something. Ice cream? Weed? Chocolate bars? Vegemite? Down pillows?

Sweet, smiling Esther…I LOVE HER TOO! Could anyone not? Steve and Derek are awesome Dads. YAY!
Bowie makes the rules at Sabrina's. I know a little somebody just like him. He even looks a little him. Cute!
I like Happy Monday's comment.
As ALWAYS DTI making Monday better. Thanks.

I love this post. Esther is so precious! I follow her on Facebook and it's so clear that she is a thinking, feeling, loving, funny and often mischievous gentle soul. And her dads are the kindest people. They turned their lives upside down because of Esther. I made a small donation to their campaign and encourage everyone to do what they can. Even 1 $ will help the cause.

I knew Esther's story and I'm in love with her. I think that everybody must have to remember her bright smile every time eat a piece of meat. I became totally vegetarian at 15 year, not before just because my mother forced me to eat some meal (small piece sometimes ) and when I discovered what happens to a cow who lives in intensive rearing I stopped drink milk and eat cheese. I live in Italy and its very hard to give up extraordinary cheese you can find here, but its enough to think about their sad sad life. Great Pets on Furniture Monday. Have a nice day!

OMG! Esther is so cute! I want to hug her!

All those pets looks so cute. I kinda got scared with that photo of you holding Esther's mouth though, it looked like she's ready to swallow you whole anytime but then again how can I think of something so horrible after seeing her sleeping like an angel. Her smile is so precious, now I'm starting to think about if maybe I should get a pet pig of my own.