There is only one room in my house that had not been touched at all since I bought  this place in 2007 – and that was the powder room. And it was horrendous. 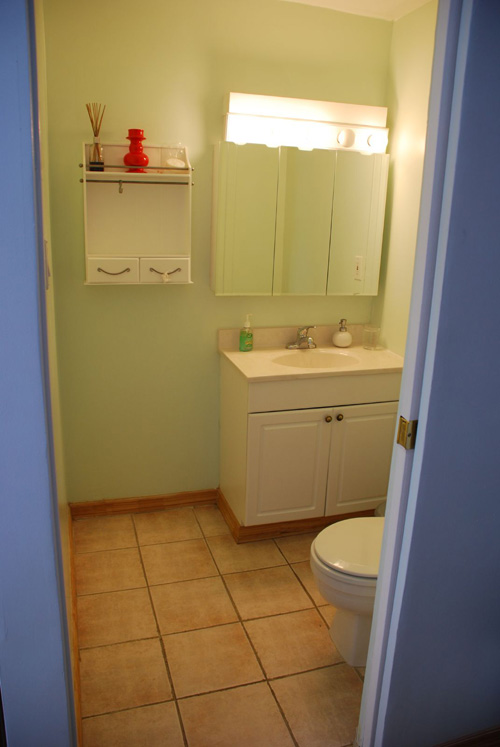 This embarrassment of a bathroom is on the main floor of my house (and there is one full bath on the second floor), which means if any guests came over, this is the one they would use. Everything was so gross, including the worst tile job ever and a ventilation fan in the ceiling that sounded like a jet. The only good things about it are the size – 5′ square, and that it has a pocket door (but with a full length mirror so you can watch yourself while you pee). Since we appear to be stuck in this house a while longer, my husband Jeff and I had talked about fixing it up on a budeget. To my complete surprise, while I was in Mexico in February, he tore everything out and started renovating it! We have been super busy so this project only saw completion yesterday. It is such a huge improvement and we are both so stoked over the transformation. YAY inexpensive reno projects!!! (Boo tiny windowless rooms! – makes for difficult photography) 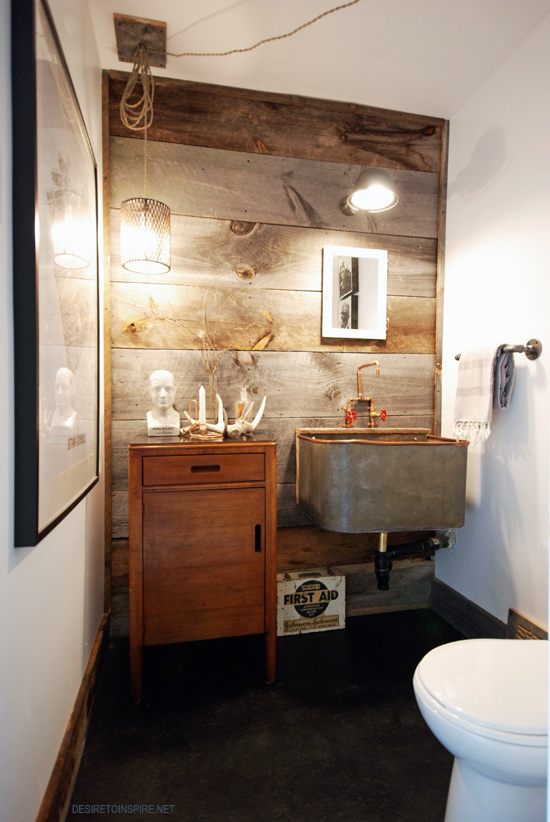 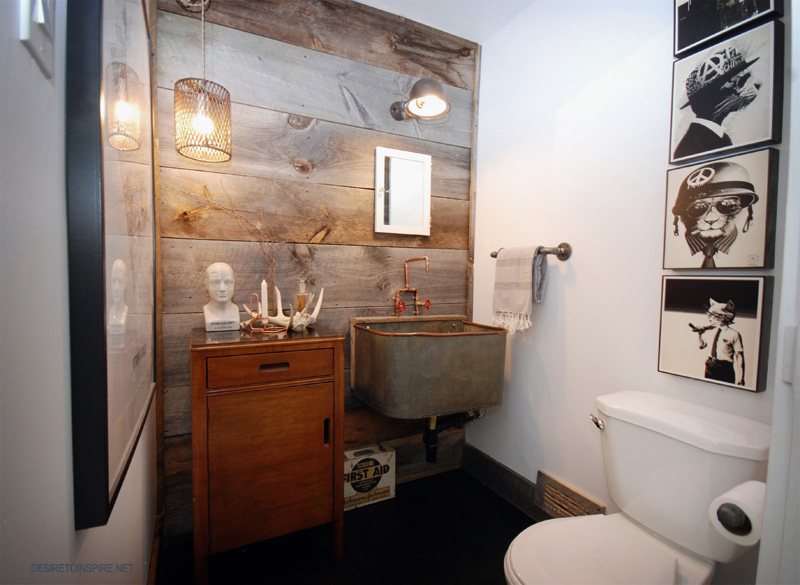 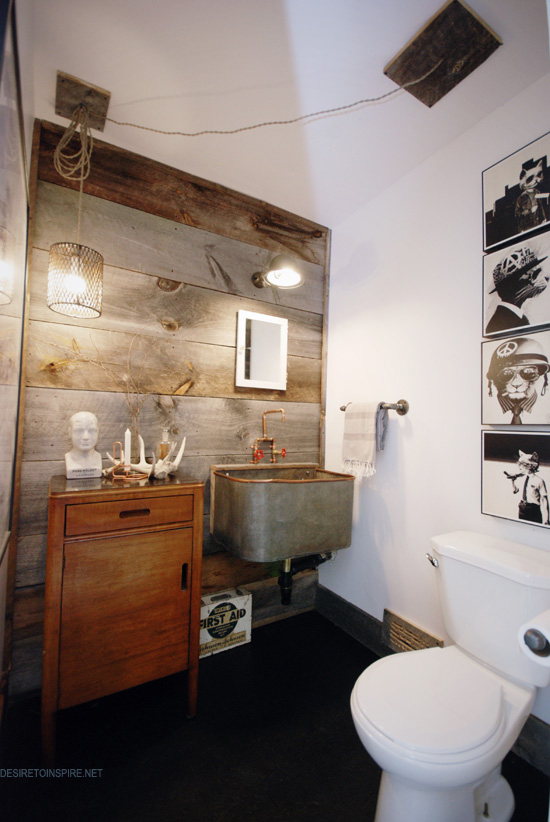 There she is, in her new glory. I now do not want to puke when I use this bathroom. I instead want to do a little dance. 🙂 Anyway, here is the lowdown. My mother-in-law had come for a visit while I was gone, and she did the painting, including the back wall which is now black, and Jeff screwed in red oak barn board (he got it from a friend who was getting rid of his shed). The boards are a bit roughly cut, so the black helps hide the gaps. It barn board was also used as trim/baseboards. The walls and ceiling were given a couple of coats of white paint. The teak cabinet is vintage from my mother-in-law who refinished it several years ago in Prince Edward Island and brought it to us on a previous visit. It has been in storage for a few years now so I was happy to find it a home again. 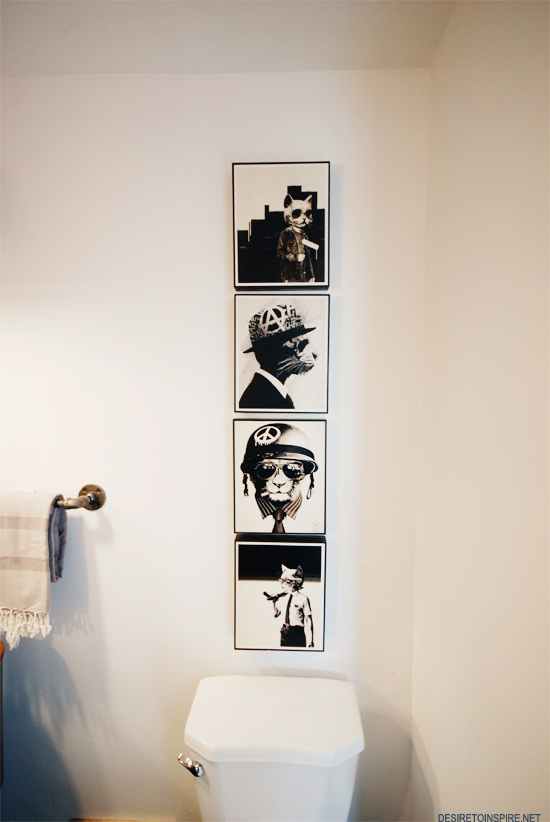 This set of 4 cat prints is by Hidden Moves – I bought them for my husband last year at Images on Bank. They were hung here several months ago when I ran out of room for them in the living room. Coincidentally, they worked rather well with the industrial/rustic theme we ended up going with. 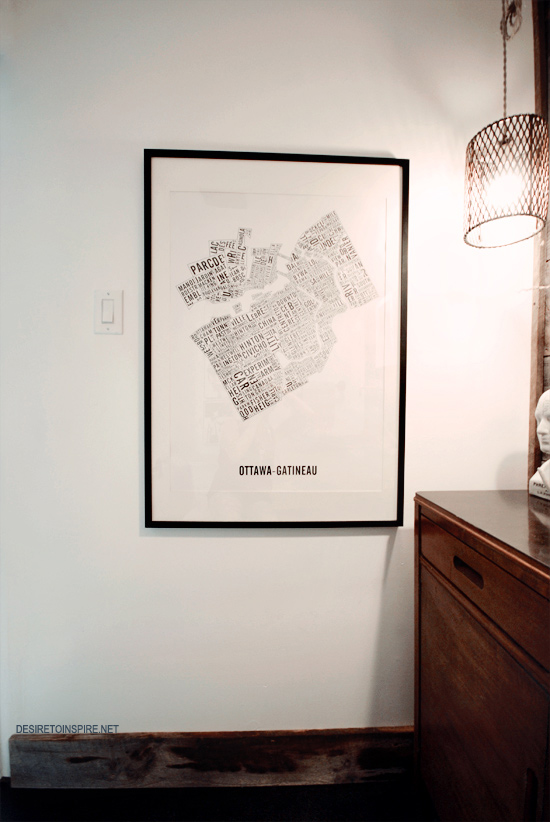 On the opposite wall is this poster by Alexandre Laquerre that came from Mike’s fabulous store The Modern Shop. It too was hung in here a few months ago because it had no where else to go. It also worked perfectly. (PHEW!) 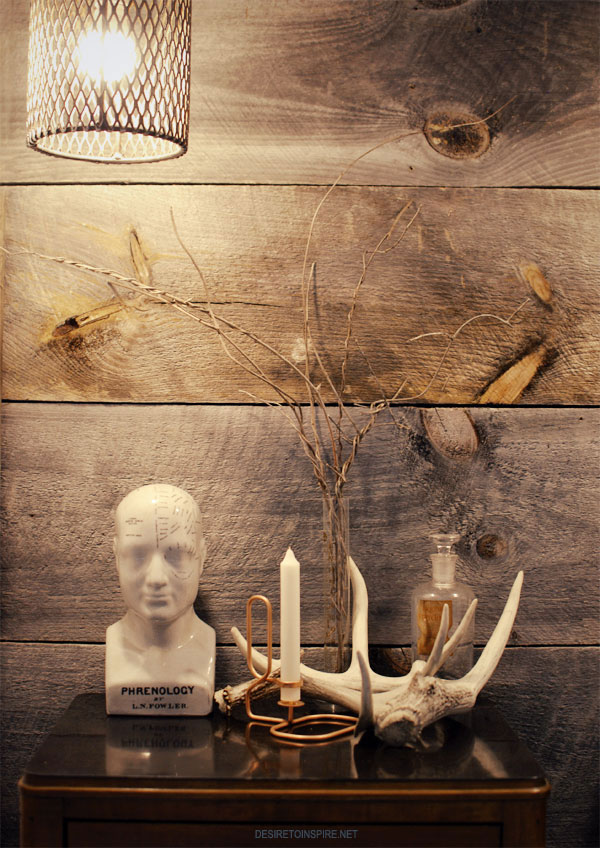 On top of the teak dresser I piled a couple of deer antlers, some things from the living room (including my Lup candle holder by Hay Denmark, also from The Modern Shop), and snapped some dead vine branches from my backyard (to be replaced with something a little less dead eventually). 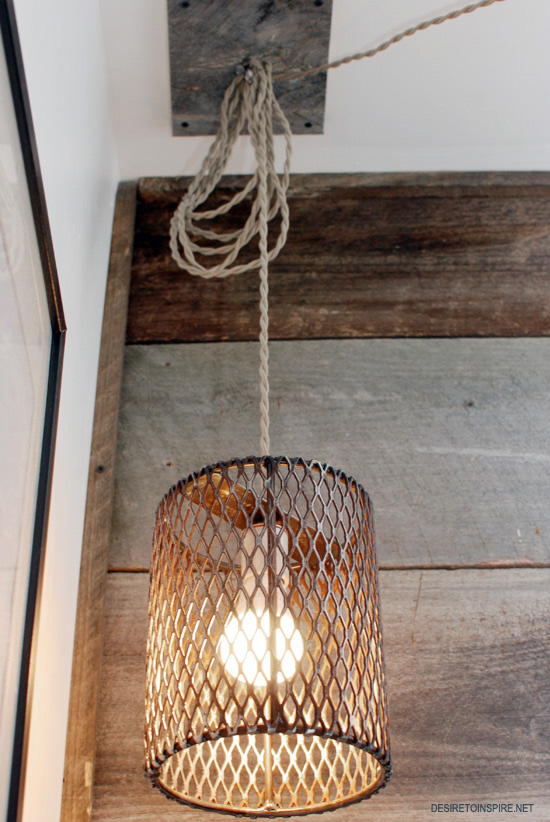 My husband won this light in a contest on Instagram a few months ago. It was made by Jon Perea (@gasweld45). The light over the sink didn’t provide enough light in the space so I suggested we hang this in here. I love it (and should have turned the shade so the seam was on the side instead – OOPS). 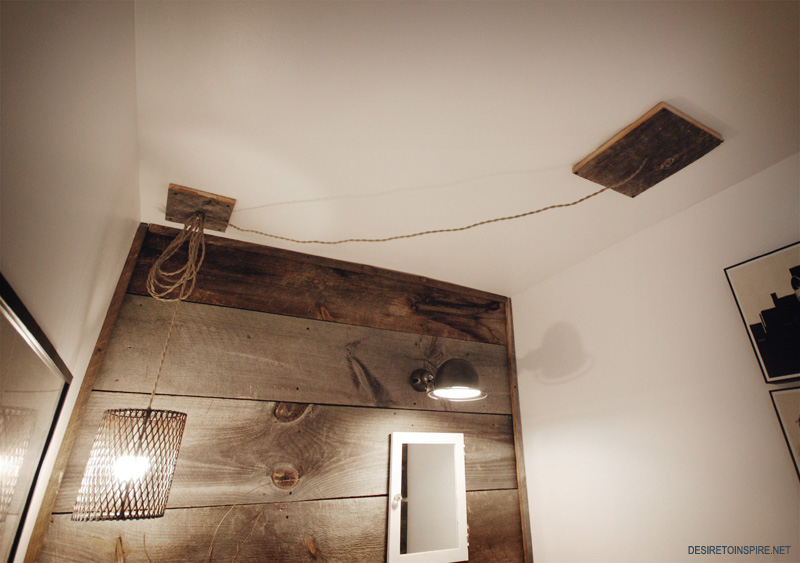 The chunk of wood on the ceiling to the right was the location of the awful, broken ventilation fan. Jeff tore it out and the result was a gaping hole – and the only place in the ceiling with electrical to hook up the pendant light. He stuck a piece of the barn board over it and the spot where we hung the pendant (it’s pretty heavy so this worked really well to anchor it so it won’t come crashing down). 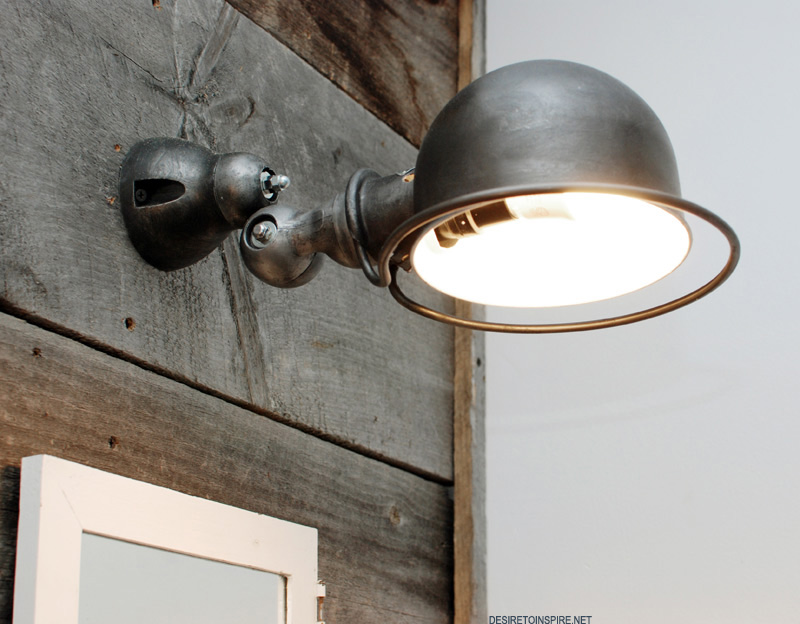 On Christmas Day 2011 I burst into tears (I swear) when I opened my gift from Jeff – inside were 2 wall mount Jieldé lights he bought on eBay. I had been lusting after these lights for ages and was shocked that he scoured the internet to find me some that weren’t ridiculously priced. They have been in the basement ever since (which killed me, although luckily I managed to get my hands on a 2 arm table lamp version last year that resides next to my desk) so I suggested Jeff rewire it and we use it over the sink. I am so happy I am using at least one of them. 🙂 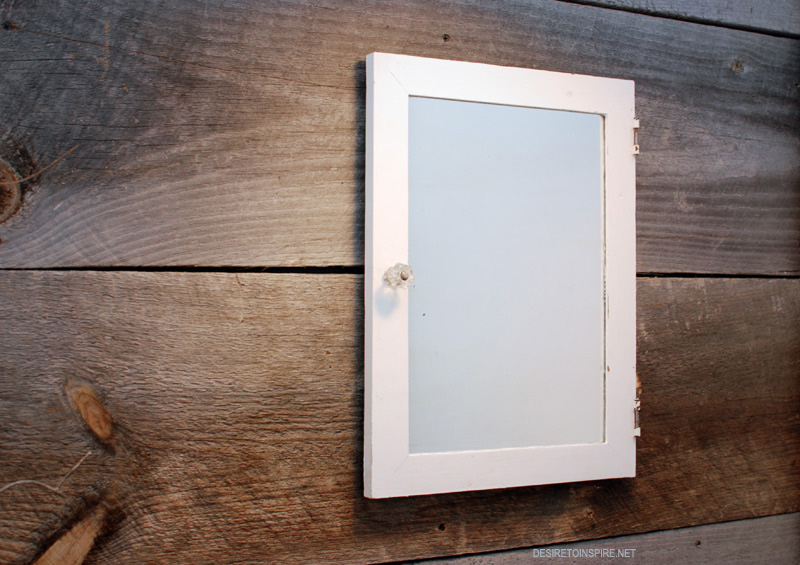 I can’t find a vintage mirror that is similar to the one I have in my head that I want in this bathroom so Jeff decided to take the door off the wooden medicine cabinet that we had used in our upstairs bathroom (it was replaced a few weeks ago with a cool metal one) and mount it on the wall. Why not? 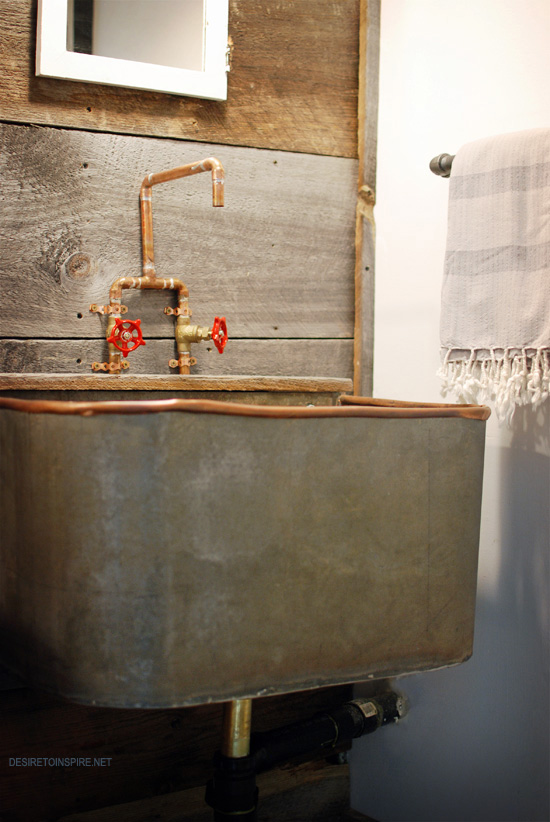 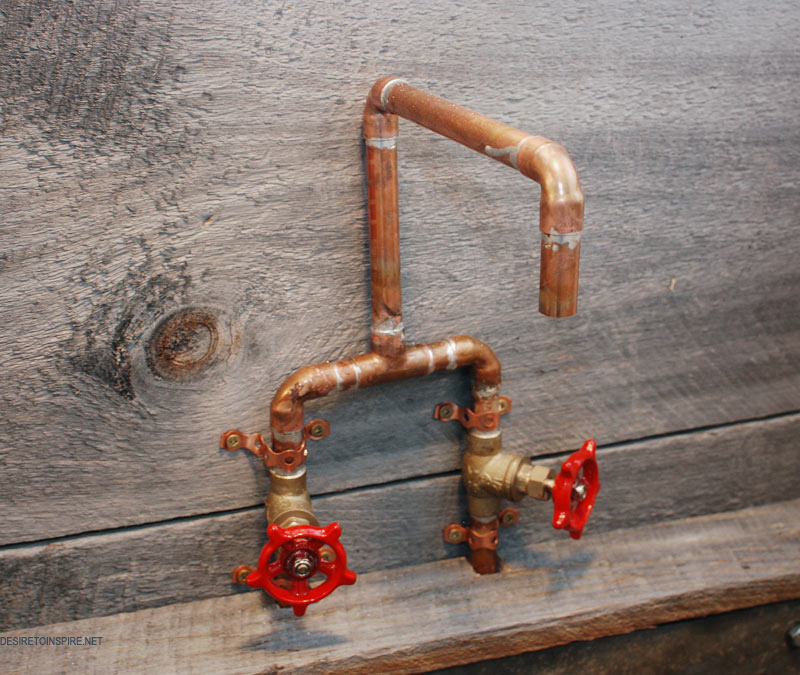 The sink was made while I was away on vacay. Jeff asked his barn board friend to whip him up a trough-style sink with some metal he had laying around. The faucet was Jeff’s creation – his first ever attempt at soldering. It doesn’t get much more rustic than this! I even love that the tap on the right ended up at a 45 degree angle. I was going to get him to redo it but decided to hell with it. I like wonky. 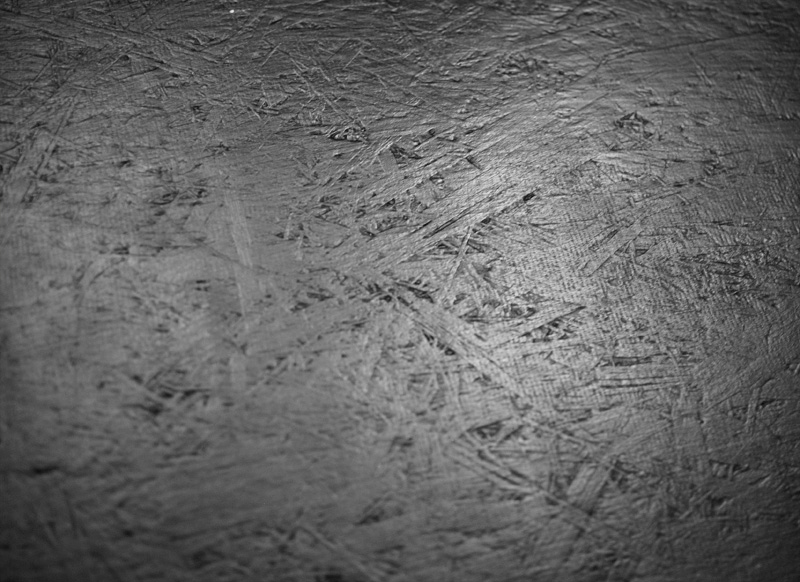 Jeff tore up the tile floor and glued down 3 pieces of chipboard which got a some coats of flat black paint. This part was also done while I was on vacay – he knows me very well. 🙂 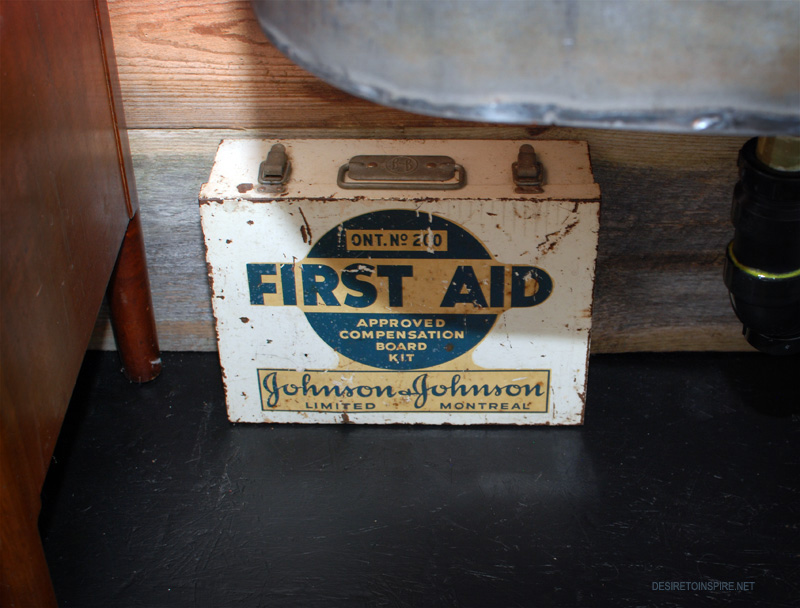 This first aid kit was an artifact unearthed from the basement – I think we bought it at a thrift shop many years ago. It is so cool because inside (I forgot to take a photo) are old glass bottles of medicine and ointments and bandages etc….and it has my last name on it. 😉 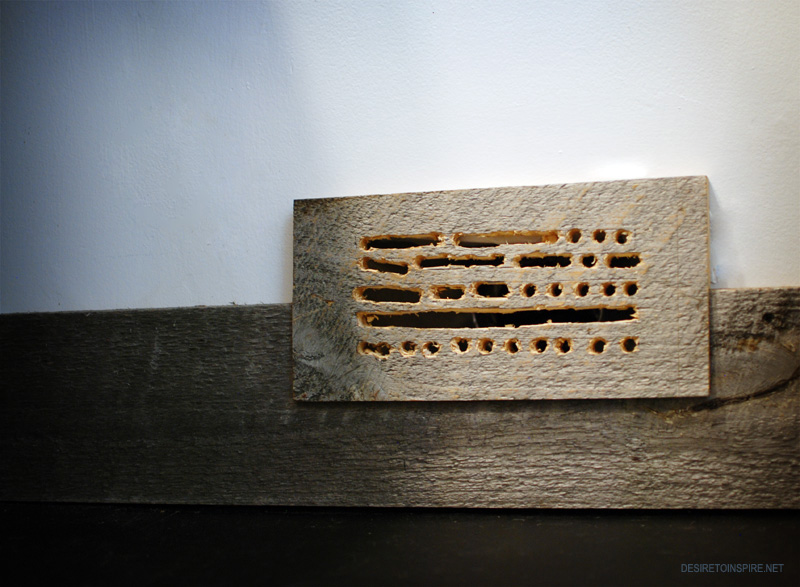 This vent cover cracked both Jeff and I up. Another awesome attempt by my handy husband. 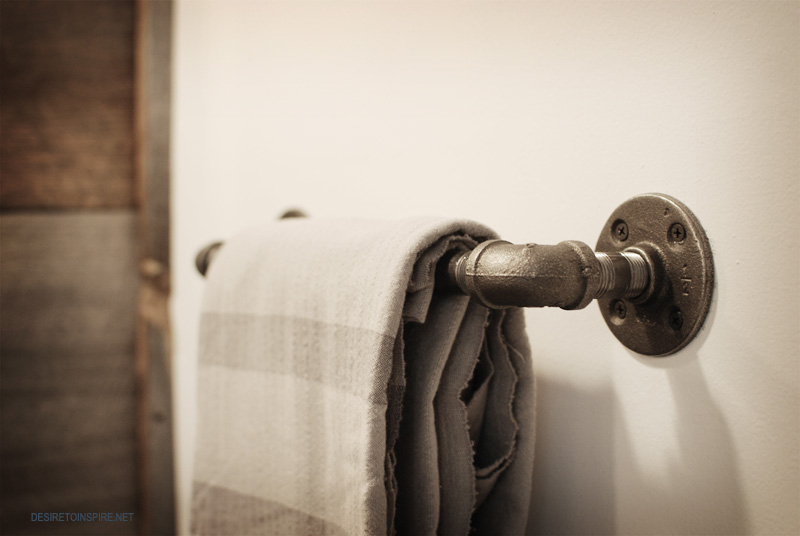 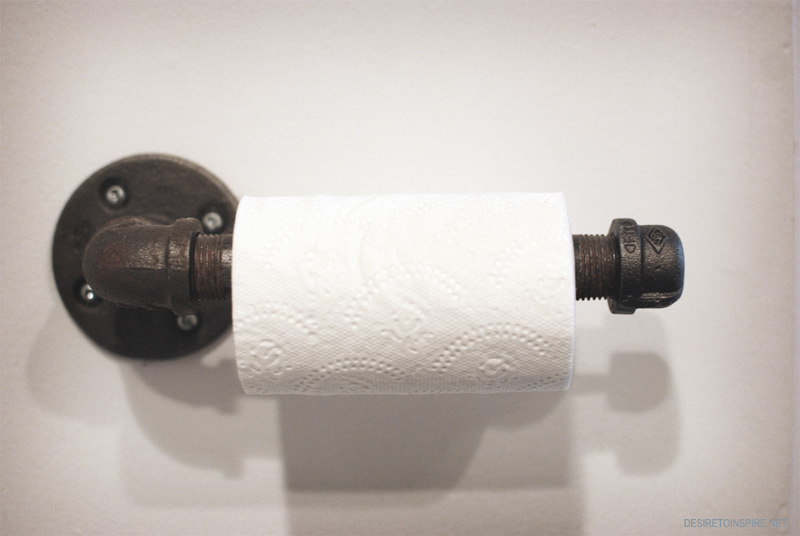 So cool! Especially love the fixtures and piping!

What a power couple!
It looks awesome Kim! 🙂

Love the decoration! And every pipe at sight is amazing!!

amazing job! what a wonderful husband you have. he's a keeper for certain. suzanne (glebe house tour)

🙂 Thanks Gabriel, Dana, Maria and Suzanne (he's earned his keep)!

P.S. I found and purchased a mirror for the bathroom on my lunch break today. YAY!

The faucet looks like those hooks.
http://cdn.freshome.com/wp-content/uploads/2011/04/coat-racks-by-nick-fraser.jpg
Great bathroom work!

This is soooooo flippin awesome. I adore the faucet and the swagged ceiling light. Freaking genius, all of it.

Wabi-sabi in the city

A marriage of old and new

The renovation of a historic home’s kitchen