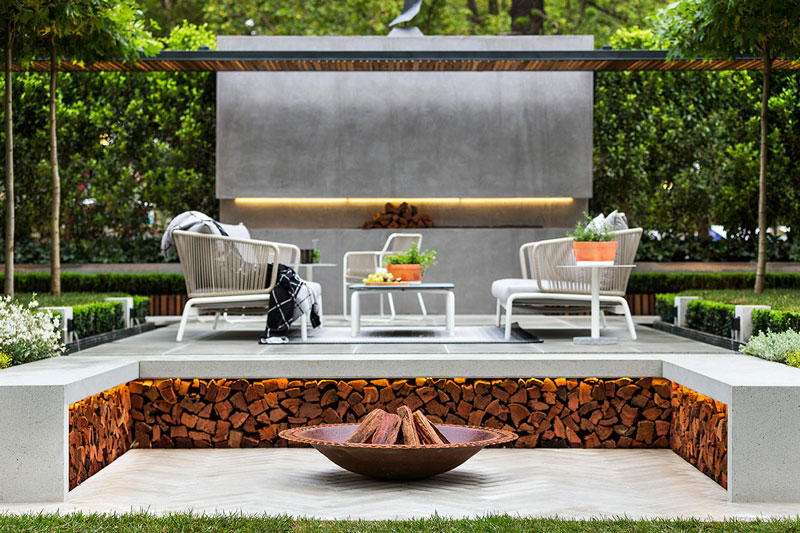 I have landscaping on the brain because the snow has all melted here in Ottawa and I am left with the most embarrassing front lawn in my entire neighbourhood. For whatever reason, in the 75 years since this house was built, no one bothered to landscape aside from sticking 2 evergreen bushes asymmetrically on either side of the front walkway (you can see what I mean here). And I live on a busy street so please Ottawans, don’t judge me. I had nothing to do with it. And as soon as I can afford it, some serious landscaping is going to happen. When we were sent these photos, my embarrassment went into overtime. This is one of the most beautiful garden designs I have ever seen. It is the creation of landscape designer Nathan Burkett for this year’s Melbourne International Flower and Garden Show. Titled ‘Equilibrium’, Nathan’s garden signals a return to soft, usable spaces where greenery is used in place of traditional ‘hard’ landscaping elements to create structure and symmetry in nature. Some of the garden’s key features include a cantilevered arbor which wraps around the perimeter to create an architectural ‘frame’ in which the rest of the garden sits. The seating area is paved with intricate stone work which continues along the garden’s base, interspersed with soft lawn areas and a pond which is subtly tiled with Italian glass. The living pergolas (mature deciduous Plane Trees), which stand approximately 3m tall and have been grown over a five year period, represent a return to nature as an architectural centerpiece, using organic material to create the built form. ‘The garden is soft with movement and organic elements, while still recreating my signature aesthetic of symmetry and clean, crisp lines.’ I am SO inspired by this stunning design. Kudos to Nathan for knocking another one out of the park. 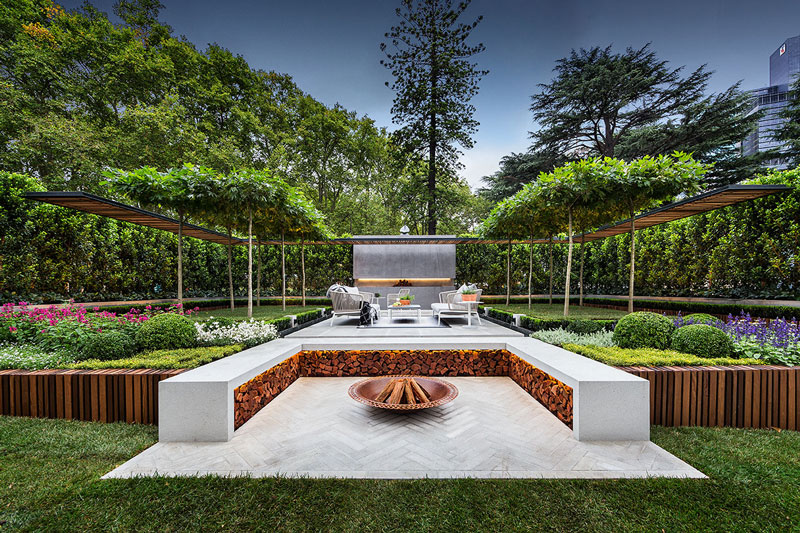 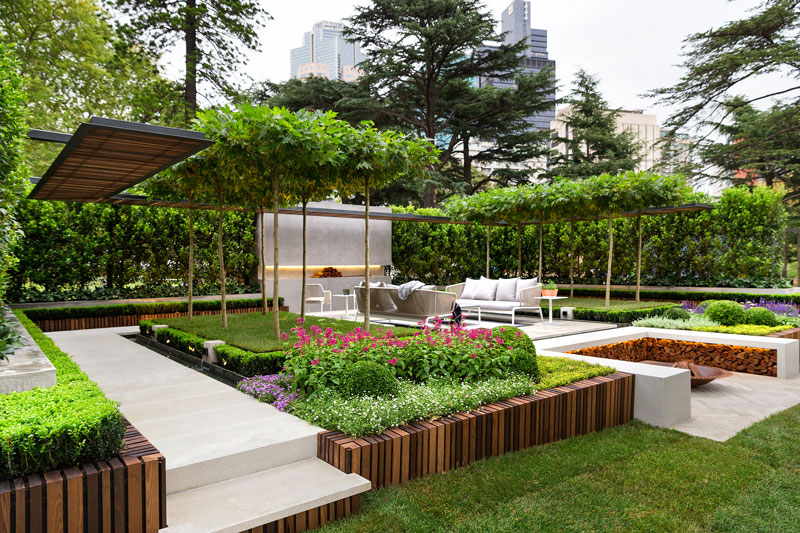 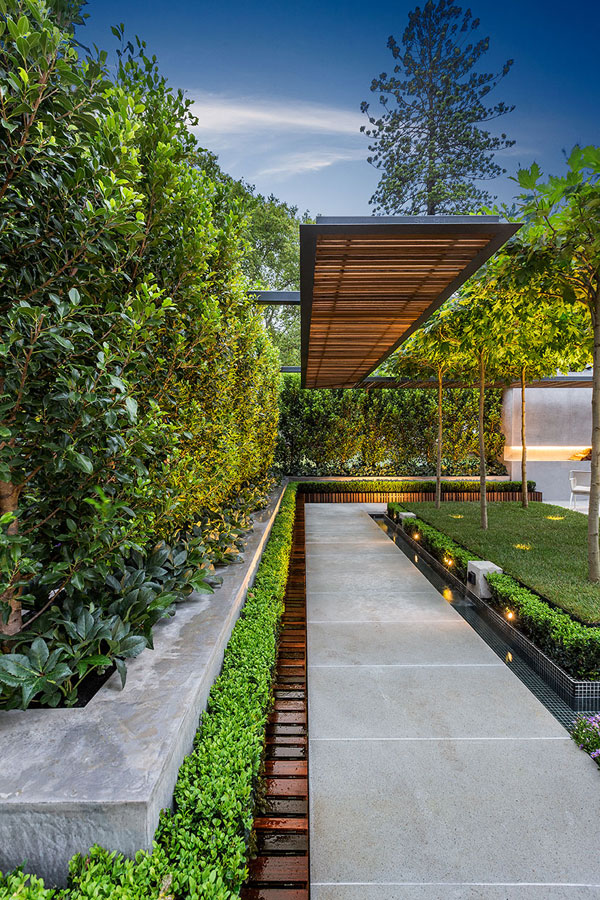 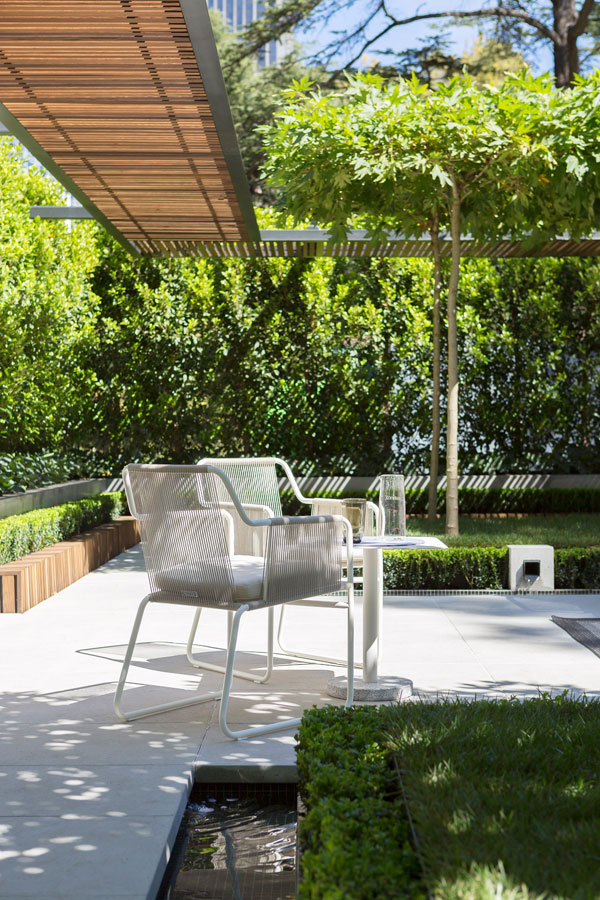 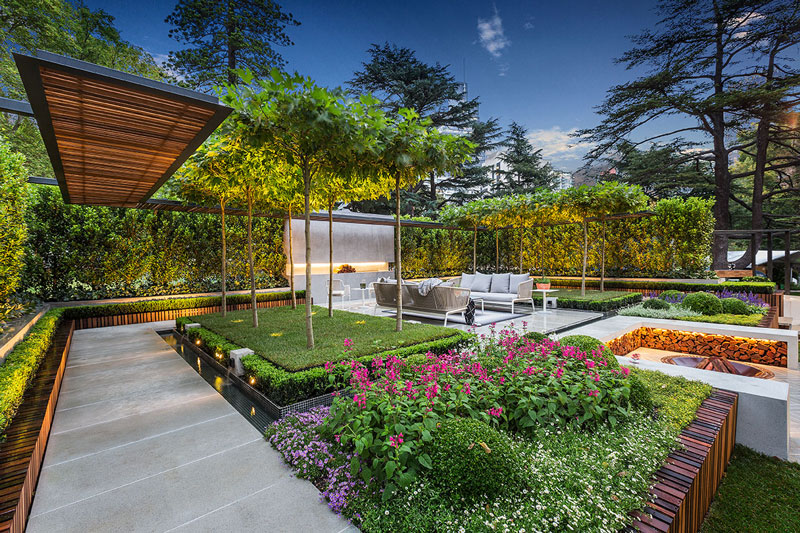 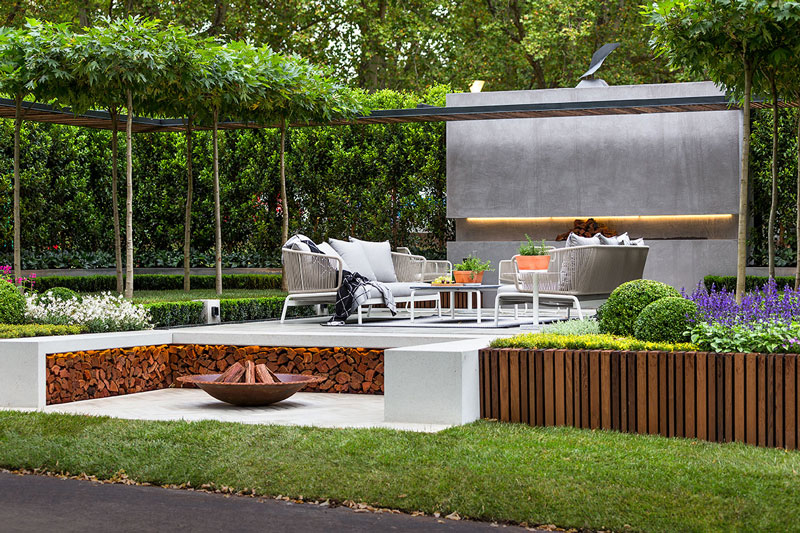 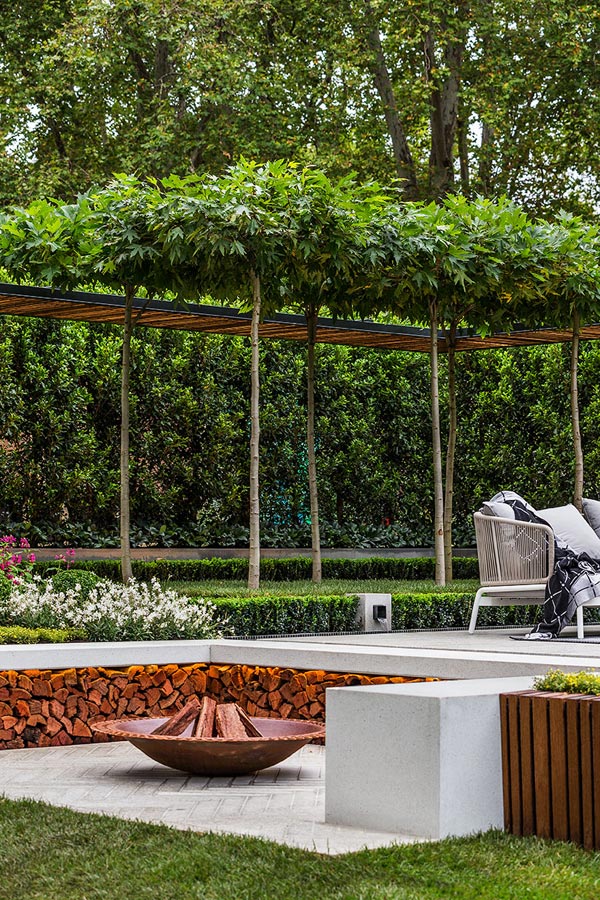 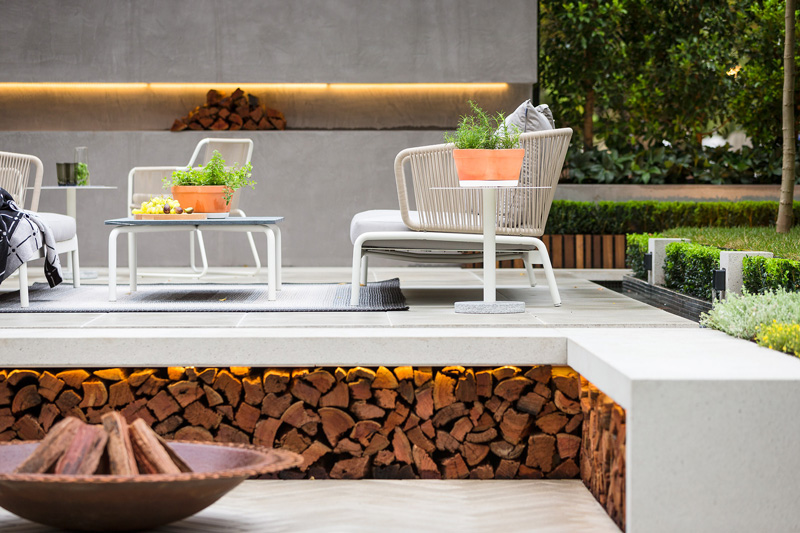 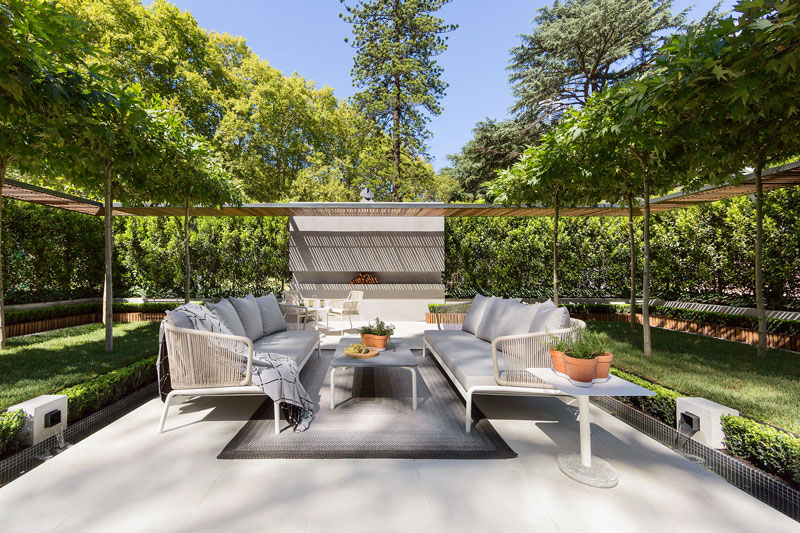 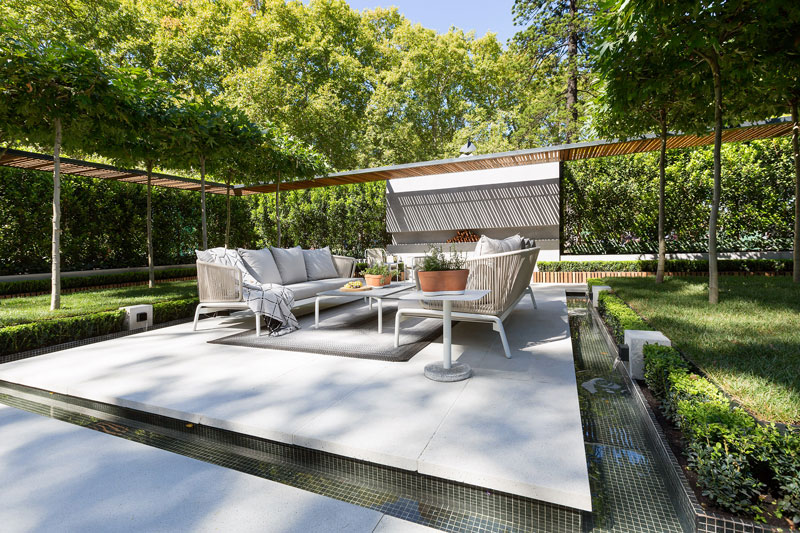 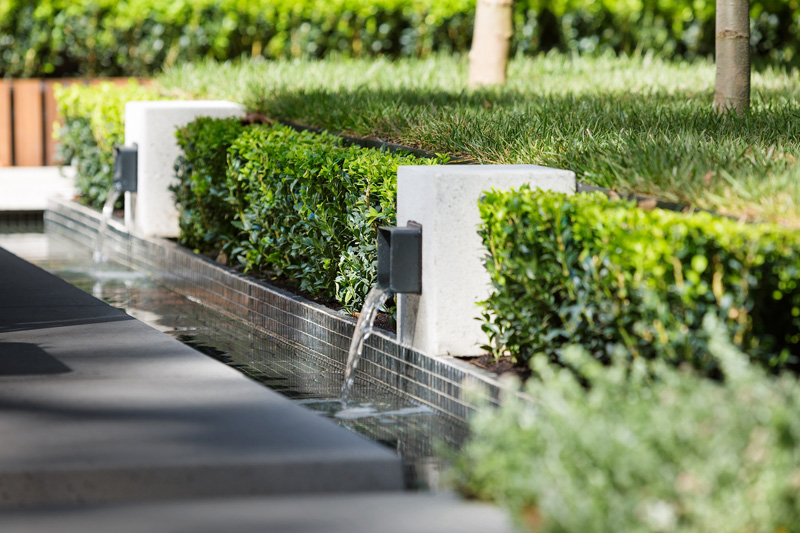 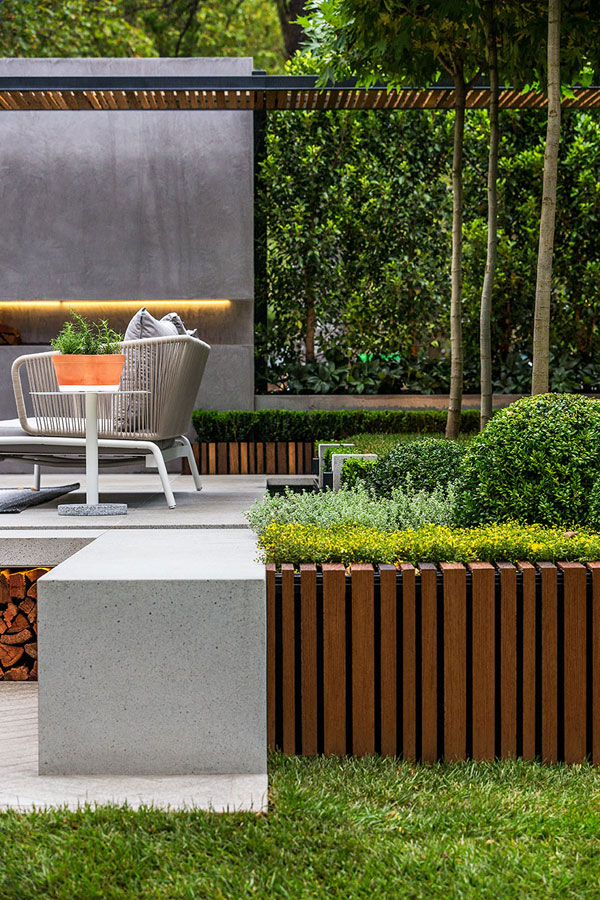 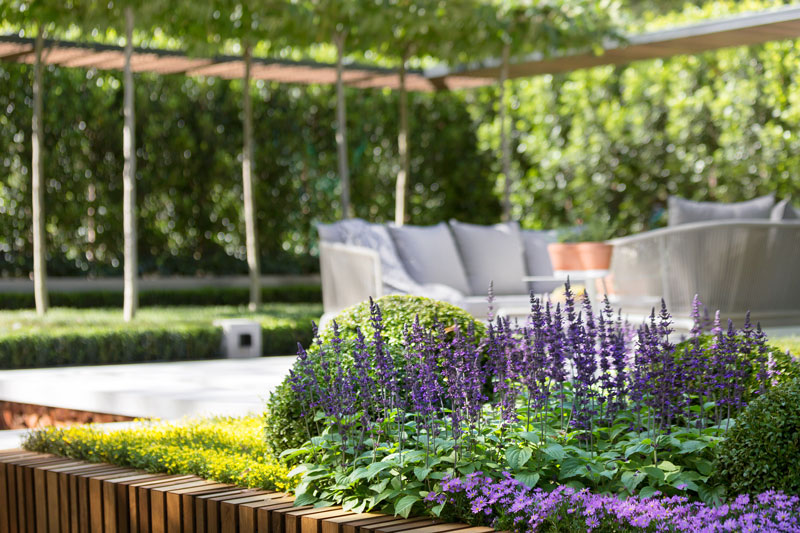 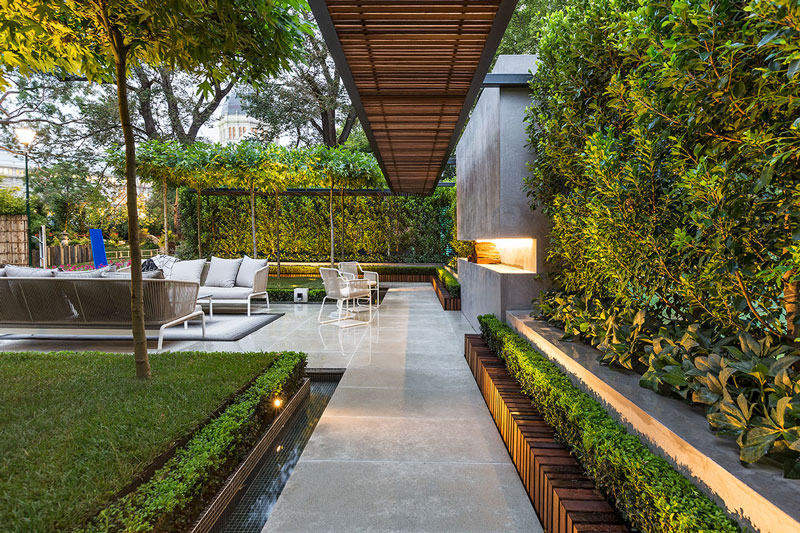 That IS stunning! Green and yellow used to be my favorite colors…I've been returning to those this past year or so. I love all the green. I do love flowers too, but this is SO SO soothing. Thanks for sharing!

stunning!!!! it looks very simple, but I cant imagine, how much work should have been done to have that beautiful place. Great job, lovely place to be.

Kim, that concrete work that Nathan did on his garden looks great. How much concrete was pumped and poured into making the pathway? Seeing that has me wanting to know more about doing the project on my backyard.

I've seen many urban gardens, but this is, hands down, the most stunningly creative…..Exquisite!

Red, white and blue in Bellport

A home and guest house on the Magdalen Islands