I had a blast in Germany recently (my first visit there!) thanks to the folks of Miele Canada and Maverick PR firm who invited me to participate in the international launch of the revolutionary new creation – the Dialog Oven. We had no idea what was being launched before the trip so it was really exciting to finally learn what the hype surrounding this event was all about. Myself and a handful of other Canadian bloggers, food writers and magazine editors flew into Berlin and had a great afternoon and evening doing a bit of sight seeing and enjoyed a fantastic dinner where we spent most of the evening trying to guess what product Miele was launching (LOL). You can check out more photos from Berlin here on my page. At the airport this big red Miele bus was waiting to take us to our hotel: 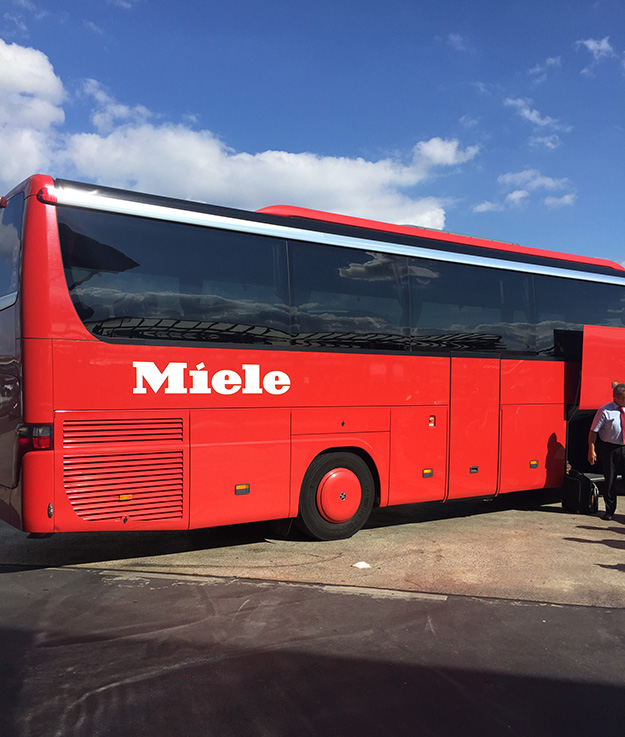 The following day the bus dropped us off at Bolle Festsäle, a stunning industrial building that was completely revamped for this event. It was VERY impressive, and the “show” they put on blew me away at each stage. 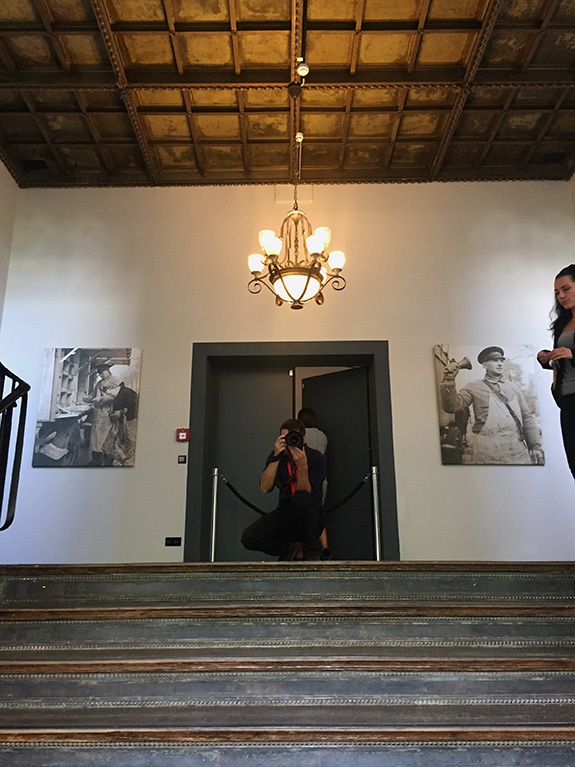 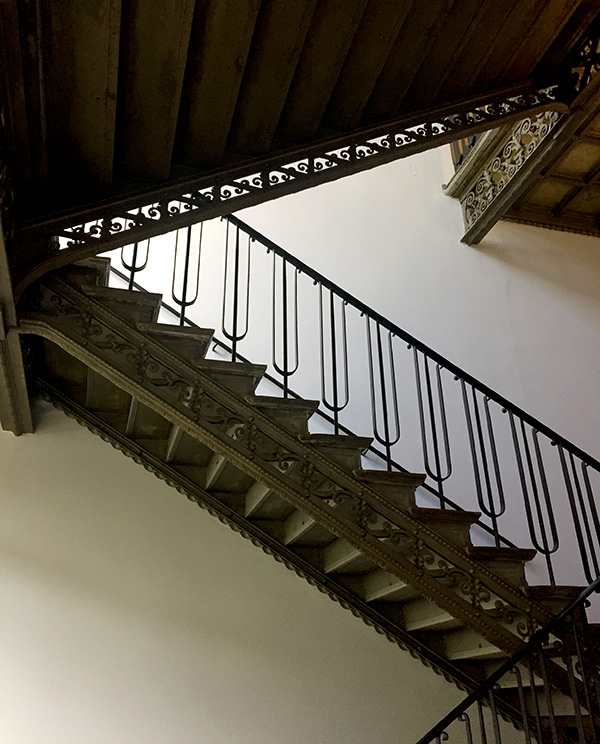 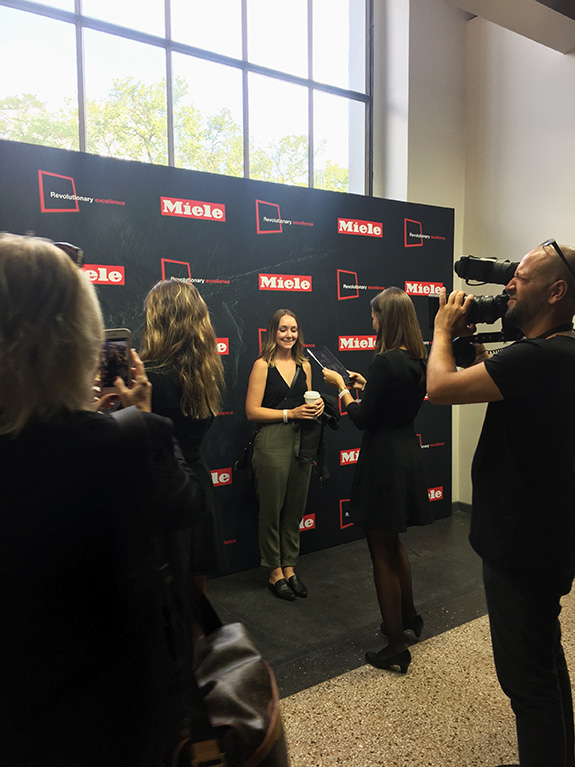 We were greeted with champagne and hors d’oeuvres and photos were taken of each of us and our faces then flashed on the wall of the initial space that was decked out with a history of Miele products. 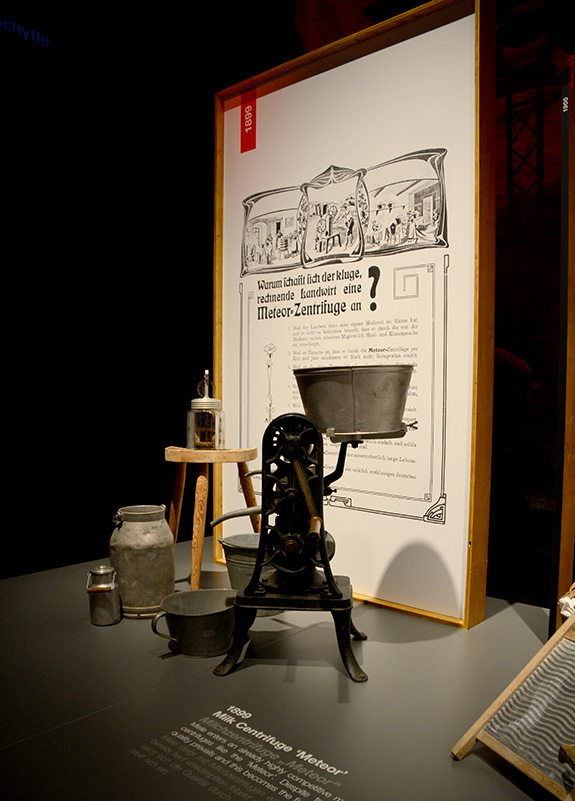 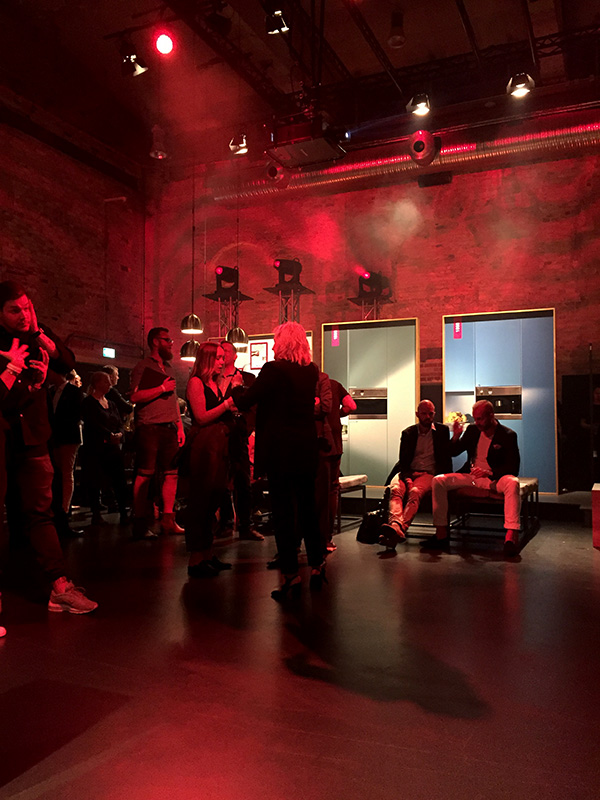 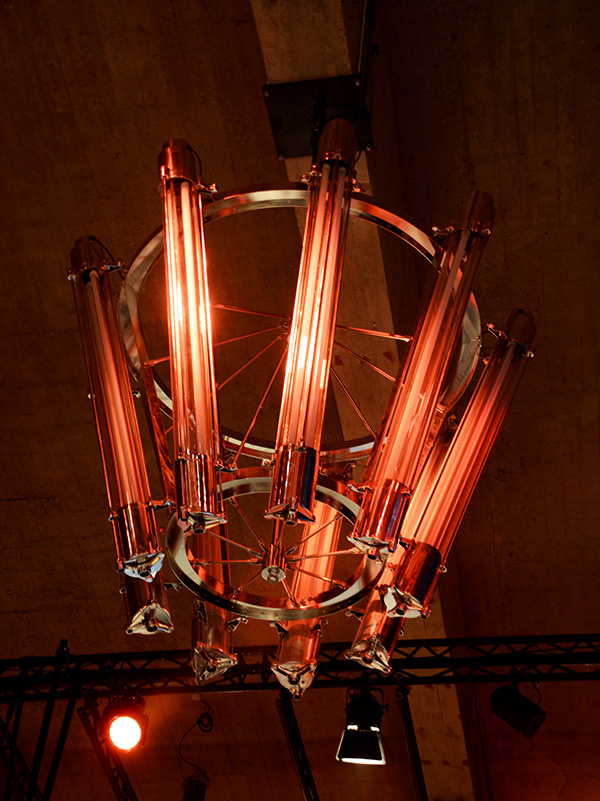 Introductions were done by Dr. Reihnard Zinkann (executive director & co-proprietor) and Dr. Markus Miele (executive director & co-proprietor). Interesting bit of history of Miele: since its inception in 1899, the company has been in the ownership of the Miele and Zinkann families. All of the 80 or so family stakeholders are direct successors of one of the two company founders, Carl Miele and Reinhard Zinkann. 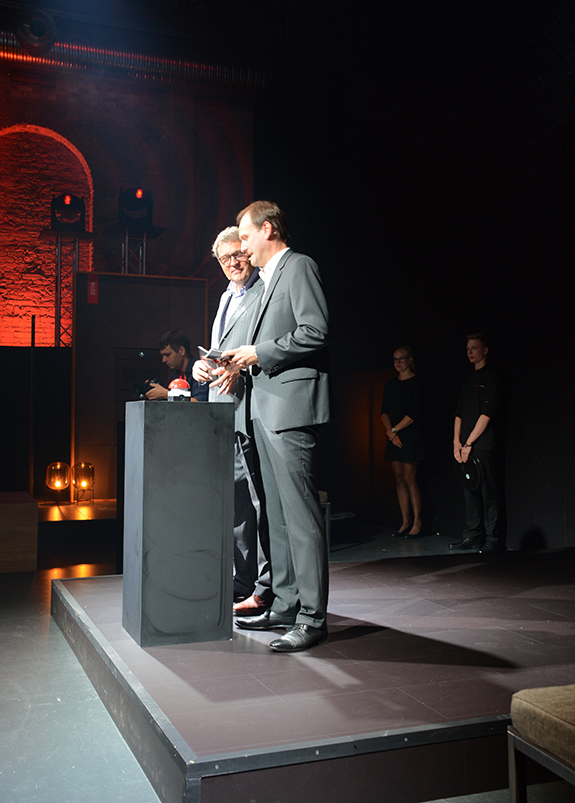 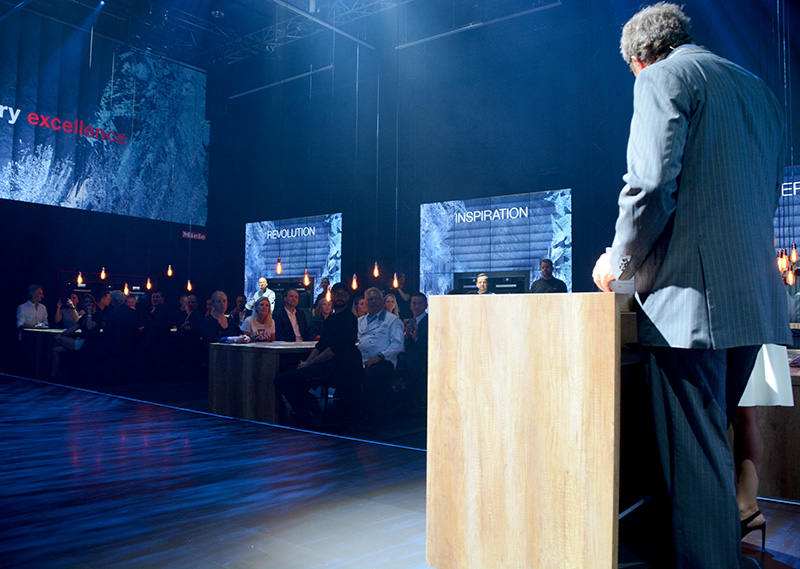 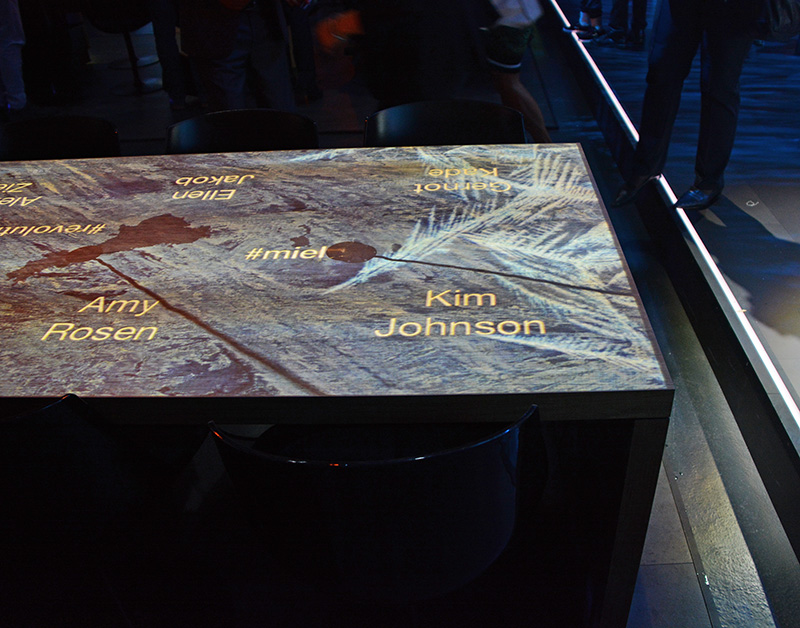 Following introductions we began to learn about this new Dialog Oven with a 4 course meal cooked by superstar chefs. And this is where the voodoo, the magic, the mind-blowing technology started to emerge. This oven cooks food in a way you have never seen before. It uses electromagnetic waves, and “communicates” with the food it is cooking. The oven has 2 antennas on the ceiling in the interior that is able to calculate how much energy it has sent out and the food has absorbed. This is not like a microwave, and the proof of that was when during the demonstration, a frozen German cream cake was put in a Miele microwave, and another was put in the Dialog Oven. The microwaved cake became a soupy mess. The cake in the oven came out perfectly thawed and ready to serve. 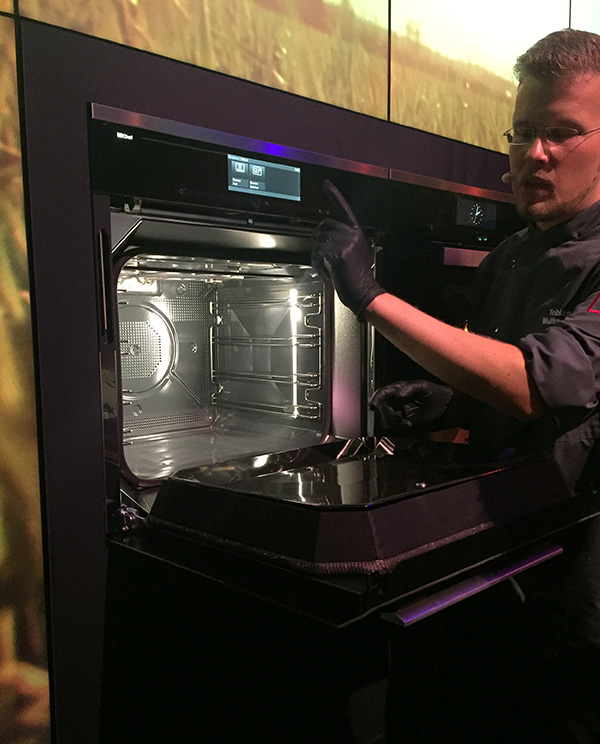 For the first course, the chefs at each table had ice boxes and in each box they placed a piece of fish. These boxes went into the oven on a tray, and 8 minutes later it was ready….the fish inside the ice was cooked and the ice did not melt! The oven is smart enough to know to only cook the fish, and the energy is only put into the fish. And to note: the chef pulled the tray out with his bare hands. There is no wasted energy heating up the entire oven cavity. 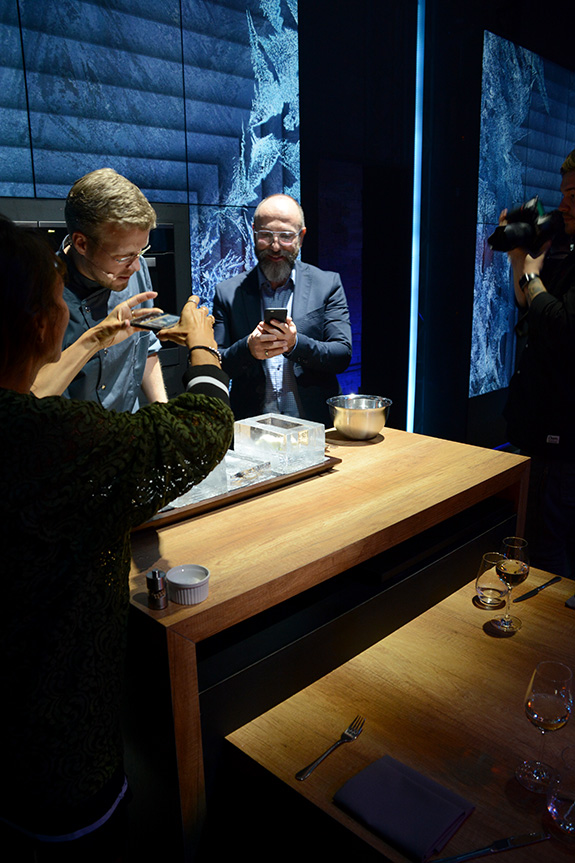 Our second course appetizer was salmon cooked 2 ways. Pieces of salmon were placed on a tray with half of each piece covered in foil. The chefs programmed the oven to not cook the part of the fish that was covered in foil. And sure enough the pieces of salmon came out with each side under the foil raw. This is epic folks! How many of you have a significant other who likes their meat cooked differently than you do? You can put a roast in this oven and tell it to cook one side medium well for yourself and rare on the other side for your husband. This oven even saves marriages! LOL!! The next course was veal wrapped in beeswax. The veal was cooked to perfection of course, without melting the beeswax. WUT?! For dessert we had raspberry souffles, again, cooked perfectly, because the Dialog oven knows exactly how long to cook them. This really is mind-blowing technology my dear readers. This oven is totally dummy proof. You tell it how you want your food cooked and it knows exactly how to do so, and it does not matter what you put in the oven at the same time. You can put a roast on one side of the pan and some scallops on the other and the oven will cook both at the same time and each they will come out together cooked perfectly. You will never undercook or overcook anything again. You will never forget anything in the oven and have it burn to a crisp. You never have to worry about forgetting to thaw something that was in the freezer. Oh – and it will cook your food 70% faster than a conventional oven. I am told it will do pulled pork in about 2 hours. It’s voodoo I tell ya. Unfortunately voodoo comes at a cost, but if you’re eating at home a lot and want to eat really good food, then this oven is for you. It’s not launching in Canada until about 2019 but boy do I ever want to get my hands on a Dialog oven. I can’t tell you how exciting it was to witness this unbelievable technology that is going to change the culinary world. Kudos to Miele for this epic discovery.

After the event we hopped on a train to Gütersloh, where the Miele headquarters, the Miele museum and factory that produces washers and dryers are. I was not allowed to take photos in the factory but let me tell you, I now want to own only Miele appliances. I was blown away at how caring this company is towards their employees, how much care is taken to produce each appliance, and how durable they are. The going joke at Miele is you’re still a newbie if you’ve been there under 10 years – everyone who works for Miele is a lifer. At one station an employee wrapped his hand in a nylon stocking and ran it around the drum of the washer looking for anything that would snag. We saw a graphic of how the perforations of the drum are much smaller than the average drum, ensuring your clothes come out less “pilled”. You can put silks and any delicate fabrics in a Miele washer and they come out as if taken to the dry cleaners (told to me by someone who owns them and swears by them). Our tour guide took a coin and bashed it on a washer door – it showed no marks at all. The company’s principle is IMMER BESSER = always better and that was what Carl wanted to do from the beginning was improve on the products he used that did not work as efficiently as they could have. Which is why when you buy Miele, you know you are paying for quality and efficiency. So I thought I would share some photos from the museum tour. And I have a post up on my page of some photos I took around this gorgeous town. 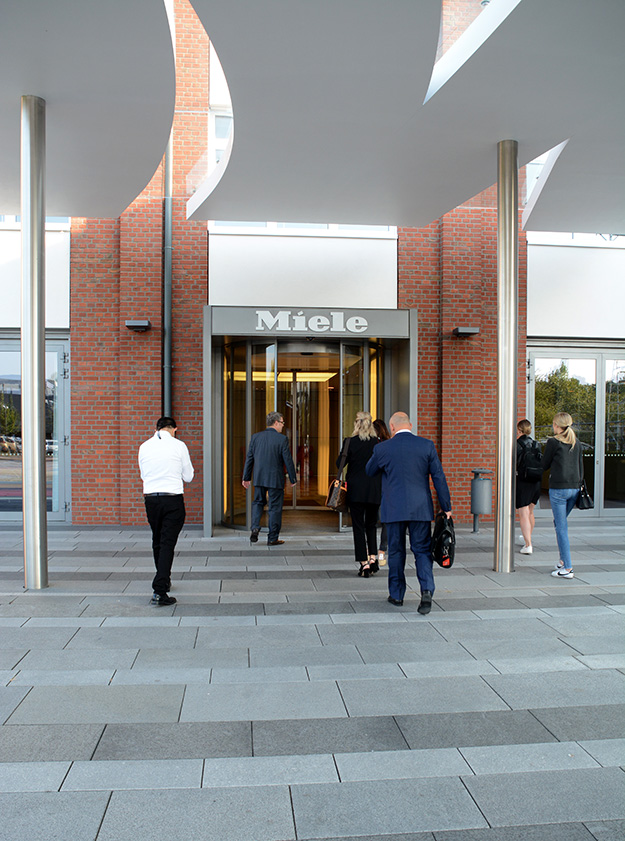 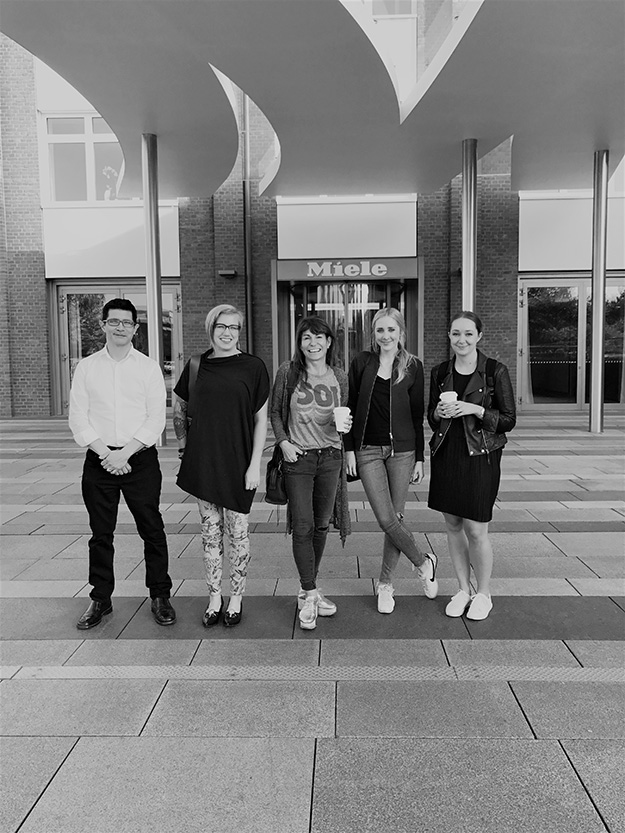 The Canadian crew that was left after the oven launch that travelled to Gütersloh for the tour (that’s me second from left). 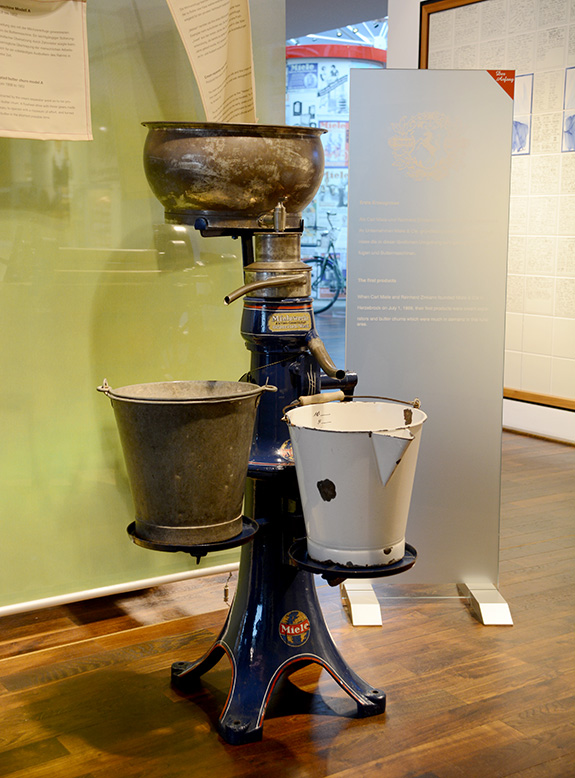 It started with cream separators and butter churners and then washing machines, dishwashers, vacuums, bikes, even a very short production cycle for cars to the empire it is today. 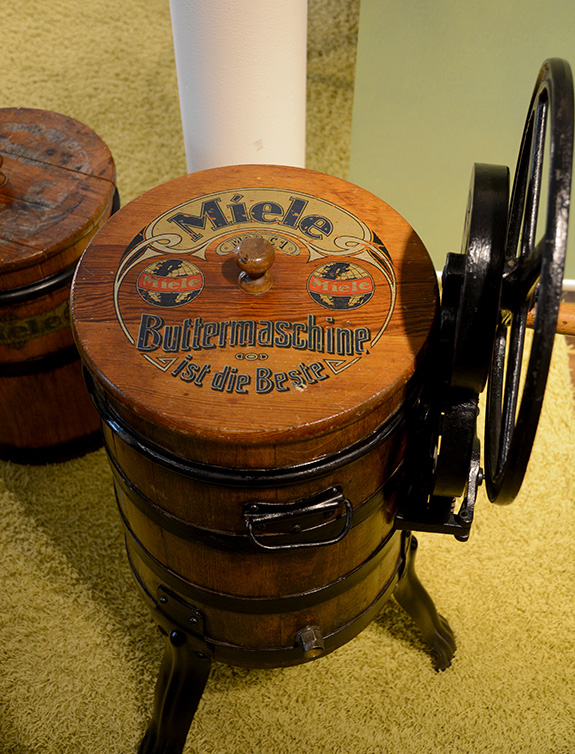 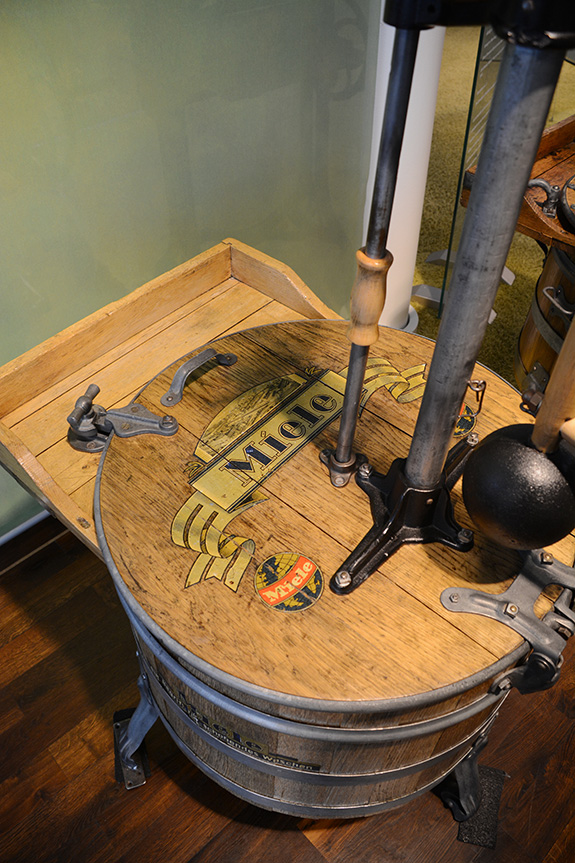 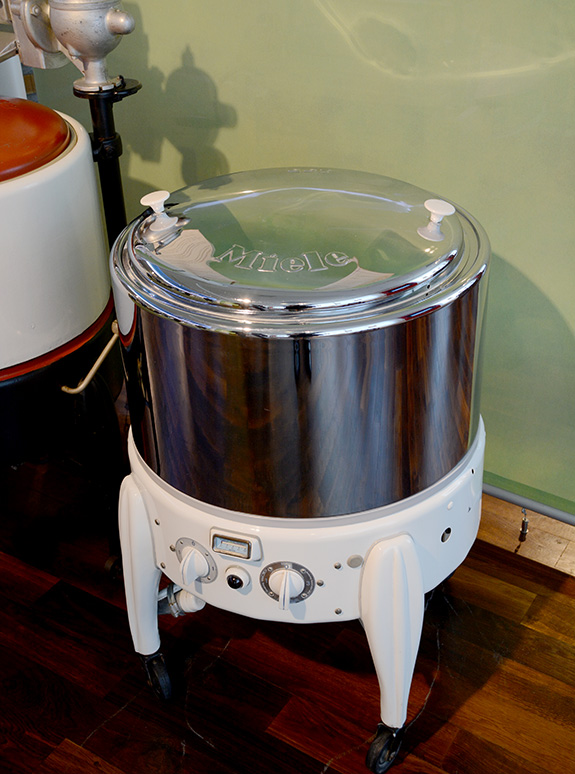 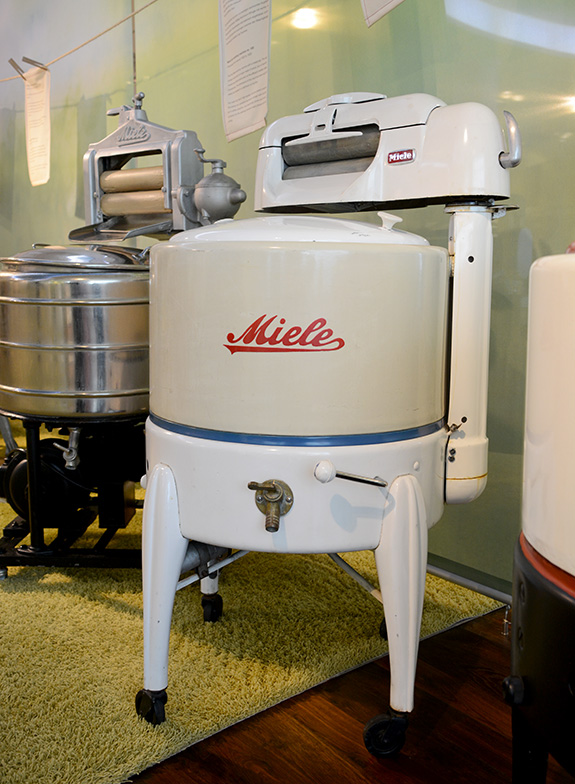 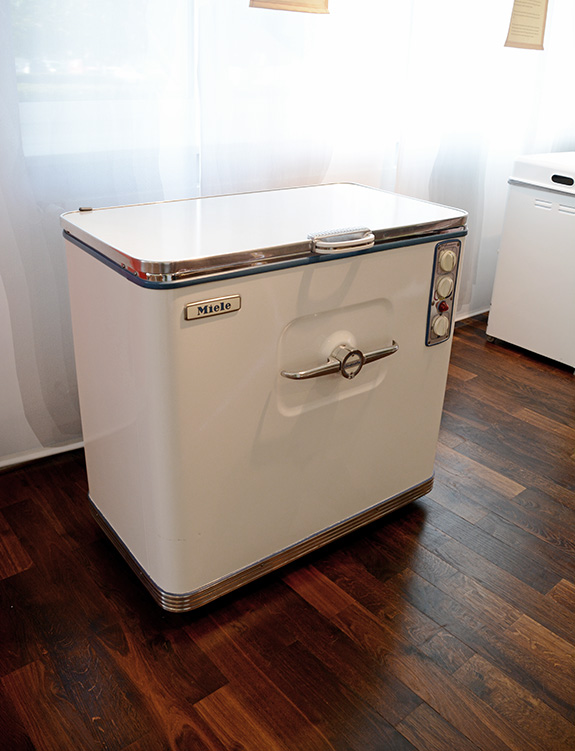 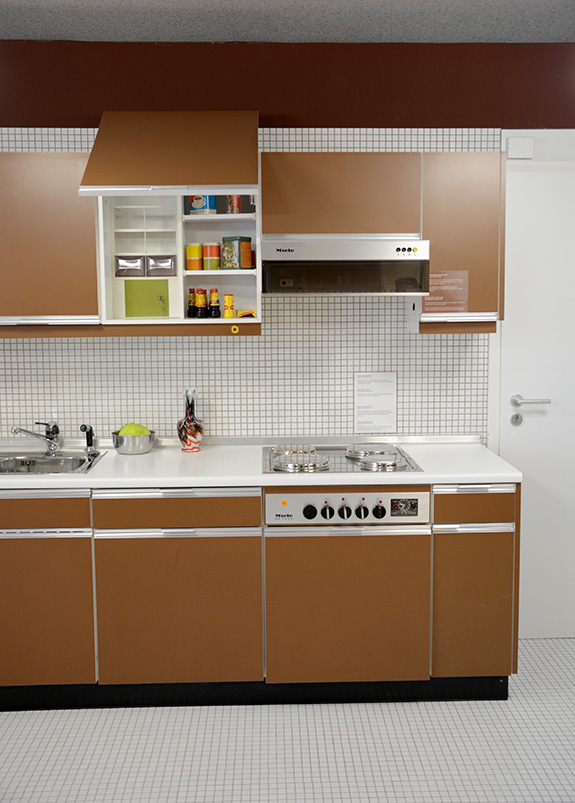 A Miele employee happened to own an original Miele kitchen so when they renovated they donated the kitchen to the museum. 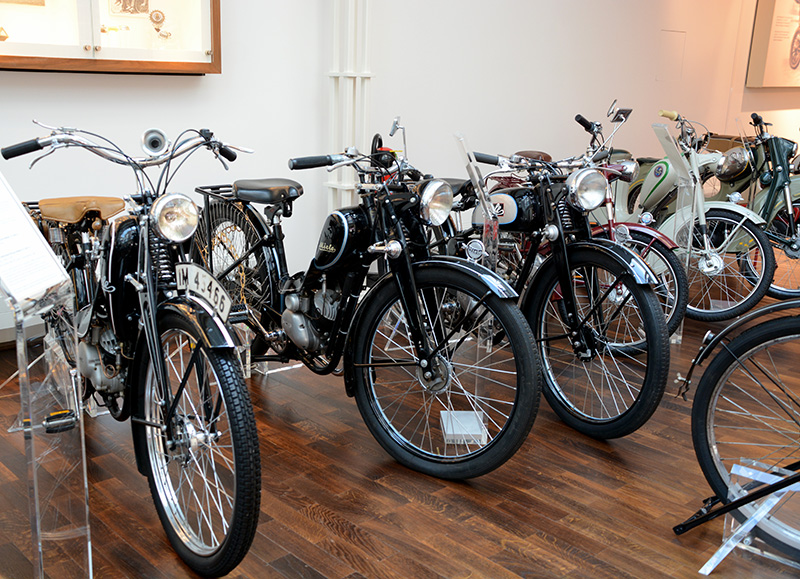 The bicycles and motor bikes were soooo cool. Would love to own one of these. 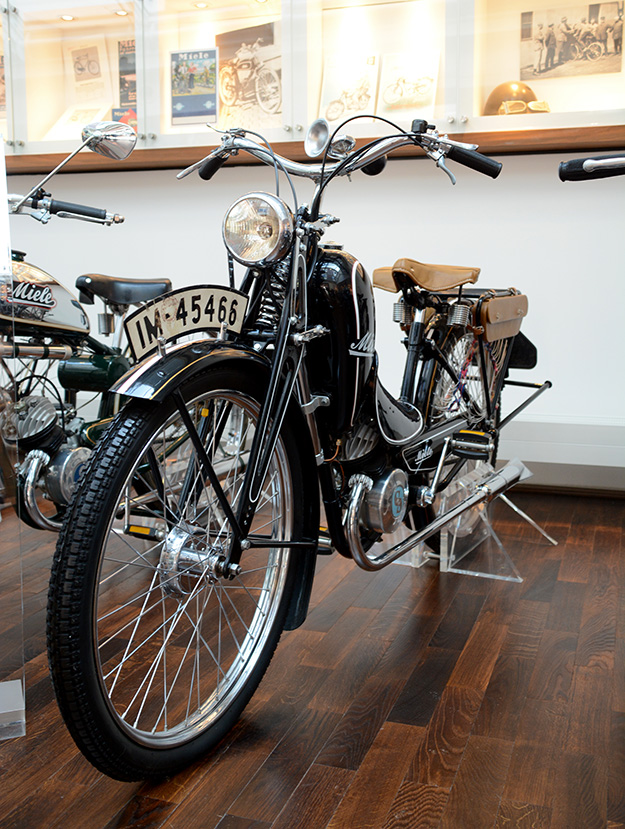 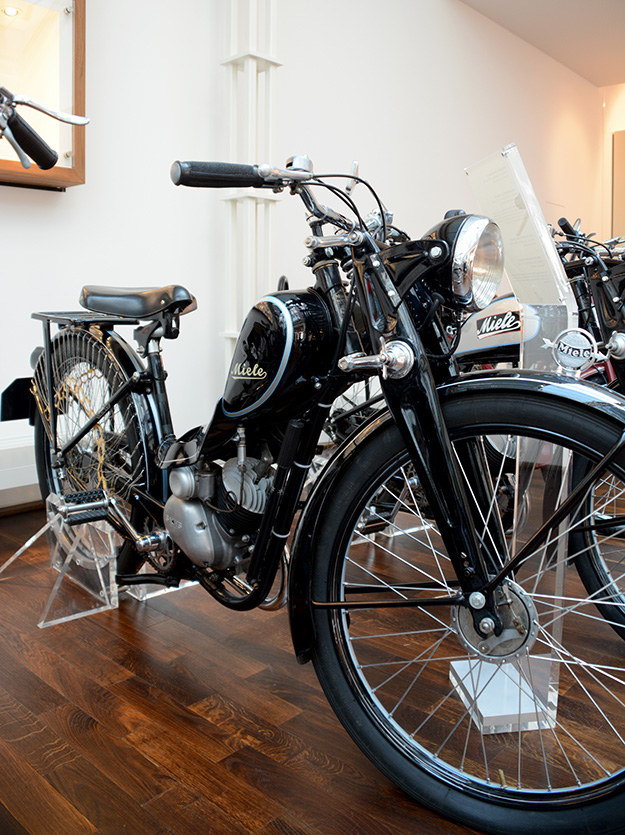 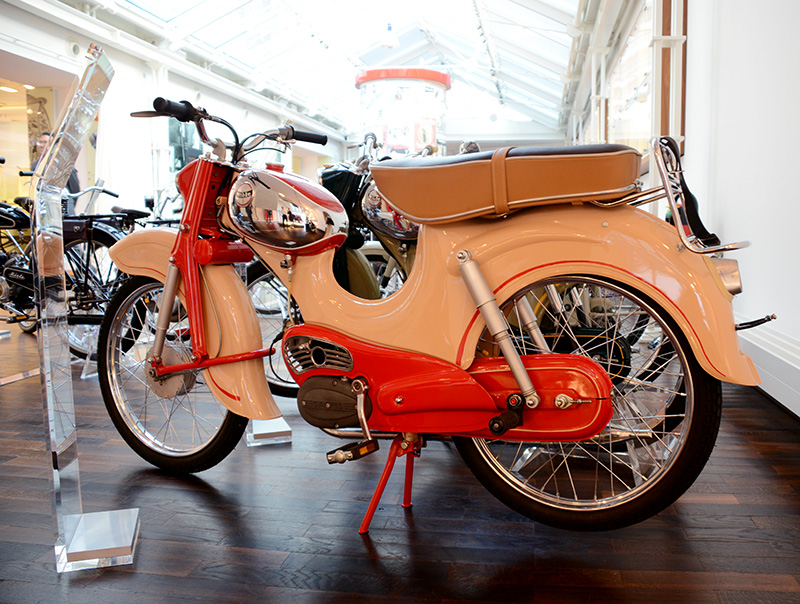 I also have some photos I took in Frankfurt where I had to catch a flight back home – check them out here.

The Germans, smart. So glad you got this awesome time there. That oven… beats my little ez bake IKEA oven for sure…. Thanks for your post!

the technology was developed by goji foodsolutions' in israel

It's great to hear about the newest inventions! Thank you! I wonder how much it will cost?

It is true. Miele makes amazing stuff. I am a Long term fan of this brand and LOVE my washing machine and dryer. There are no better on the market. Hence I never do hand wash for anything. I love my vacuumer too.

I've been a Miele fan for years- I love hearing about something new from them. I could definitely fall in love with this new oven. And that trip?! How exciting and mysterious, I bet you had a great time!

I looked up goji food solutions' website. Very impressive R&D going on there. Thanks Gabi!

@Ruth – my first trip to Europe proved to me a very memorable time. I had a blast! (Beats my piece of crap electric oven probably bought at Ikea too)
@Gabi = Interesting info – thanks!
@Moyra = I hear it will be about 8,000 €
@Ombia = I"m hoping there's a Miele washer, dryer, fridge, oven, vacuum, coffee maker in my future 🙂
@axie = It was a really awesome trip. And this oven really got me excited. 🙂

Wow, I've also recently spent five days in Berlin (plus Eastern Europe) and absolutely loved it. So much history to absorb.

Your photos of the Brandenburg Gate are better than mine. I have a Miele 45cm dishwasher in my tiny kitchen and just love it.

How to Choose Between Repairing and Replacing Your AC