Raffles or bingo. Tickets or balls. Turn it round and round and hope they pull out your number. Vintage tombolas.

And so it begins again

We worked on the cosmetic changes inside our old house over the first couple of years we owned it. Then came a hiatus, a long hiatus. Money was tight and all those annoying repair jobs that an old house throws at you became important. Not the new kitchen or bathroom, not the exterior painting. No it was all about replacing old sewerage pipes and gutters and rotten boards. Finally we are on the move again.

Sometime in the 80s the railings on the front of the house were replaced with aluminium “cast iron lace”. I’ve always hated it. You see our house was built in 1860 and at that time houses had wooden railings and balustrades either a vertical or cross brace design. See below at some pics I borrowed from a local government pdf.

Here are a couple of houses in my neighbourhood that are a similar age. See the railings? So much better. (Sorry for the Google Maps views. No time to walk around the hood snapping shots.)

This one I think is very similar to what my house would have looked like. Up until just before we bought it our house had a slate roof but the then owner changed it thinking that potential buyers would be turned off by the old roof slates. I’m still pissed.

This one is a little more elaborate than I want. I won’t be doing the decorative brackets or the spindles between the two top railings or even the bottom spindles but I might do the basic three rail with vertical balustrades.

I really love the cross-braced balustrade in this house. Nice and simple and perhaps a simple decorative bracket on the posts. I also love the house below with the double cross-brace but I’m trying to keep costs down so a single will do.

Here’s a drawing of Ginn Cottage just a few blocks from me. It was built a couple of years before my house. Cross-braced balustrades and no decorative post brackets.

First thing though is to remove the slate tiles that were laid over the original veranda boards without waterproofing when the reno was done. They’ll come up and the old boards underneath (many are rotten) and then we’ll waterproof and lay new merbau boards. A lick of oil is all I want on these. We need to waterproof because Kelvin’s mancave is under the veranda. As far as the spiky security gate goes I think we will just grind off the fleur de lis and live with it until I decide if I want a wooden one built or perhaps we’ll ditch it all together.

For the moment we’ll just prime all the timber and wait until we paint the whole outside. We need to renovate the kitchen next then we’ll paint. My head is spinning with paint colours. Originally my house was all brick and was plastered some time in the 60s. It’s a horrid spackle finish and it really can’t come off because the bricks will probably be damaged in the process. I’ll either paint it and live with it or I get the house replastered to a smooth finish and then paint. I think the budget will dictate that we only paint. We’ll see. I spoke to a heritage architect years ago about painting the plaster in a colour that features in the old brick … a warm grey, a charcoal, a muddy brown. This house is on the other side of the hill. Different era but they have the same spackled plaster. The colour is a taupy/khaki greige closer to a dark stone colour with off white trims. I’m thinking it might work. I must get better photos than this bad Google Maps snap. Maybe I’ll leave a note in their letterbox asking what the colours are.

Update: Look progress! You do not know how much I hated those slate tiles.

It’s in original condition and I’ve been content to keep it that way … until I saw this tartan version at Fenton & Fenton. Maybe I should recover mine. No. I’ll add this tartan one to my wishlist. Afterall you can never have too many Grant Featherstons.

P.S. I think I’ll add everything in that Fenton & Fenton image to my wish list! 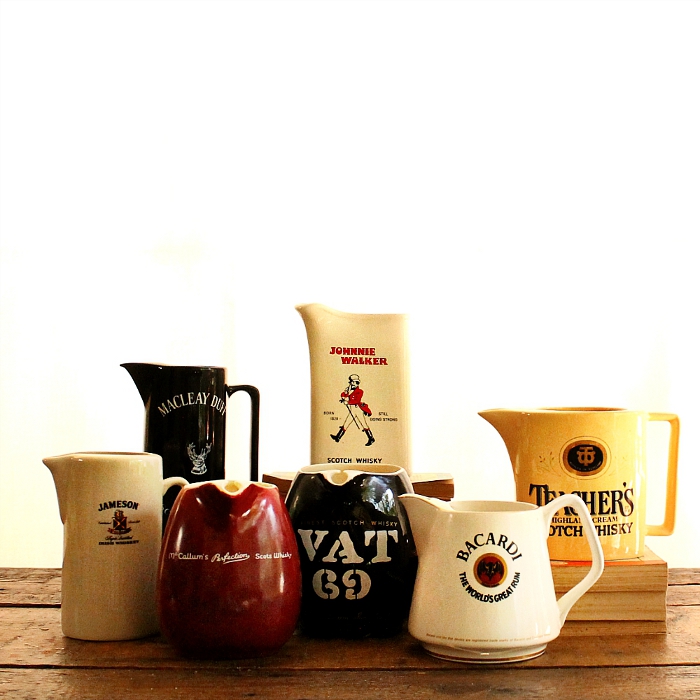 Whisky water jugs. Kelvin has 34 of these. No two the same, brands or shapes. Actually he has 33 and a Bacardi water jug. My favourite is the Jameson jug. Mmmmm Jameson’s Irish whiskey. Mother’s milk.

A 19th century castle for sale in Niort, France

A chic and singular townhouse