Kelvin’s office before and after

A small room off the dining room serves as my husband’s office. Originally a bedroom, it is a strange “landlocked” room with windows opening onto other rooms, a consequence of alterations over the years. We think it was the maid’s room when the house was first built. Here are some blurry shots I snapped on our second inspection of the house before we bought it. It’s a difficult room to photograph because of its size. I have labelled them “before” just in case you didn’t realise 😉 The furniture naturally belongs to the previous owner.

After we painted it a couple of years ago (Murabond Faraway, same as the dining room) it basically became a dumping room for Kelvin’s computer and any other electrical equipment. A desk, a chair, a small bed for when people came to stay and rolls of cables and strange unidentified pluggy inny things (that’s a technical term). We found an old metal coke sign from 1964 for $50 in a salvage yard and with the help of a friend and very strong bolts we hung it on the wall. The only picture I ever took had a green egg chair strategically placed underneath, then cropped to hide the mess.

Years passed and nothing happened. We kept finding things for the room. Kept promising to do something about it but never did. Until a couple of weeks ago. The break through came when we decided to ditch the double bed we had jammed in there and make it a dedicated office. A couple of months back I found a beautiful brown leather couch in a thrift store for, wait for it, $70. No scuffs, no tears, no stains. Real leather and down filled cushions. Score! It lived for a while in the living room but as lovely as it looked it was too small to stretch out on (don’t you know that is all a man wants in a living room couch) and it was as slippery as hell. A few seconds after sitting on it you felt yourself gliding down the cushions towards the floor. The very high arms and back I had admired in the shop also meant there was no way you could rest your arms comfortably and reaching for anything on a side table required major contortion. This was probably why it was donated to the thrift store in the first place. We dragged it into the office and at last it had found its perfect home.

Kelvin loves to collect as much as I do and some of his special objects found their way into the room. Model boats and tribal spears, whisky jugs and Boys Own Manuals, old motor racing posters as well as quirky bits and pieces. Once again everything is thrifted, found in secondhand shops or on eBay. The only splurge was the kilim bought before we moved in. There is still a bit to do. We are thinking of changing the industrial pendant light (not in shot) and I still have to wrangle all the computer cables into something neat and tidy. That’s the reason why there is no full on shot of the desk. Nothing changes. I still strategically shoot or crop 🙂

I’ve been mired in indecision, trapped in a torpor. Bugger it I had lost my mojo. Then when one of our advertisers offered me some chairs to try out I jumped at the chance. Yes. I started work on the dining room. I have ignored that poor room ever since it was painted dark blue a few years back. I just couldn’t make it work. Well I could if I used furniture from other parts of the house but then those rooms would look like crap. What’s a girl to do if she doesn’t really have the money to splurge on a room she doesn’t use.

In able to take semi-decent photos of the bentwoods in the room for the sponsored post I had to come up with something, anything. Then it hit me. The wooden bead chandelier. I had bought it after visiting the trade fairs in Sydney in February. I confess I could only really afford it because I got it wholesale through the shop. Retail and I would have had to say no. Too much money! Especially when we have lots of real jobs to do around the house. It was originally earmarked for the living room (which still has a bare bulb hanging from the ceiling … now you know my dirty secret and why I don’t take photos of said ceiling) but if I used it in the dining room … hummmm … wheels turning, brain working, mojo firing …. Yes!

I still have to pick up more chairs or perhaps I’ll mix old and new bentwoods. Artwork needs to be worked out and hung but I’m on my way. YAY!

I may be busy but I’m still thrifting … 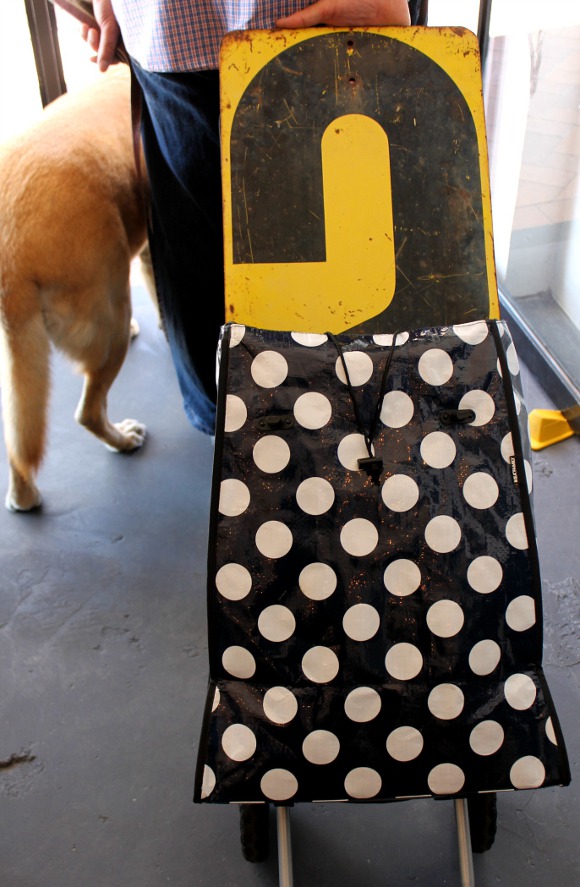 Technically this is more shopping secondhand than thrifting but I promise I still hit the thrift stores with a passion … on the way to work. Just a quick pic of Kelvin and Mickey dragging home my latest score, an old metal sign. This will look great on my dark navy walls. If I find the time to put it up I’ll snap a picture or two.

Thank you for all your kind words. I have found it difficult to revisit the last post. The thought of that cheeky little feathered bugger still makes me tear up. Things will be OK though. The new old house moves on and brings a smile to my face when I least expect it. 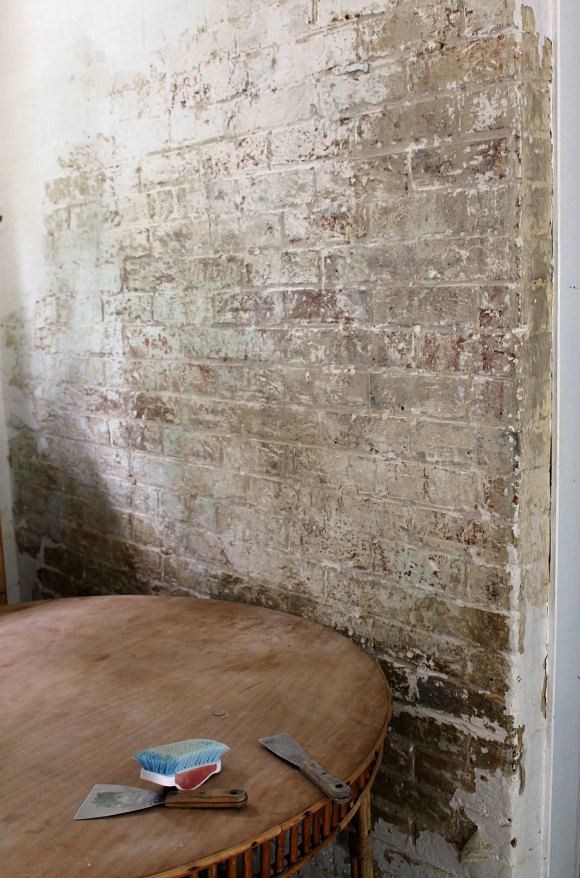 It has been a wild and woolly wet weekend here in Queensland. An ex tropical cyclone has tracked down the coast dumping hundreds and hundreds of millimeters of rain. My town is about to flood again. We are safe on our hill but my heart goes out to those who will lose their homes and possessions to the water and mud for a second time in two years. With gale force winds and horizontal rain there was little we could do on this Australia Day long weekend, so we worked on the house. Scraping, scraping, scraping away the paint to expose the bricks in the breezeway. A slow process but, I hope, a worthwhile one. Then I found this under layers of old paint. A little drawing of a bird in flight left there a long, long time ago. Even if I hate the “shabby” exposed brick and decide to repaint I’ll leave this small part of the wall just as it is. For Puki.

I’m just swamped with exciting developments. I’ll be able to reveal all soon but for now please excuse my absence just a tad longer. Here’s a little tease.

Went to the trade fairs in Sydney weeks ago and didn’t buy these for my house. Bought the big one below instead. Bad iPhone pics sorry! Sourced lots of wonderful little and not so little things for the the big thing I am not allowed to talk about yet.

Was involved in opening this … still waiting for some more floor lighting and a huge mirror to go where the ladder is. They swear it is on a truck coming from Melbourne …

And working on this… that’s all I can show you for now otherwise I will have to kill you. Lots of pics and details soon when all can be revealed. So excited.

Modern country in a one bedroom lake house