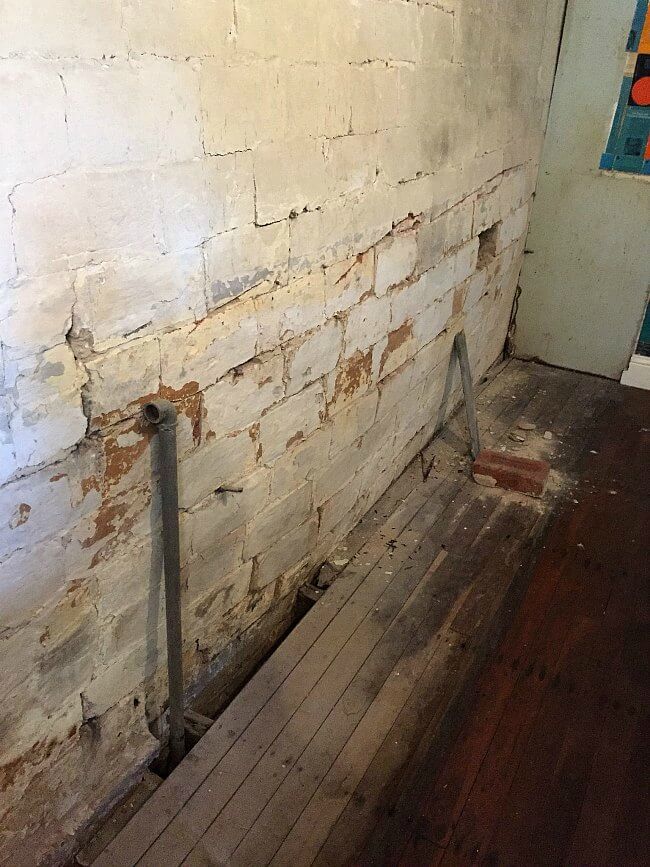 You may remember that when we demolished the kitchen cabinets there was a nasty surprise waiting for us. The brick wall on our zero boundary line was bowing into the kitchen by a good 10 cm and was in imminent risk of collapse. It had to be fixed before we could proceed with the new kitchen. After checking with a few local builders who came up with novel is not dodgy ways of fixing said wall we finally turned to Queensland’s only heritage brick masons Maurice Potrzeba. Their projects include the Old Queensland Museum, the Ipswich Railway Workshops, The Mansions in George St,  Brisbane City, Saint Brigid’s in Red Hill, St Helena Island … you get the idea. It may not have been cheap but the result was incredible as was the chance to watch these heritage masons work. Along the wall there were some wonderful surprises. I documented it at the time on my Instagram Stories and I keep it archived in the highlights there but of course I need to share it here as well. 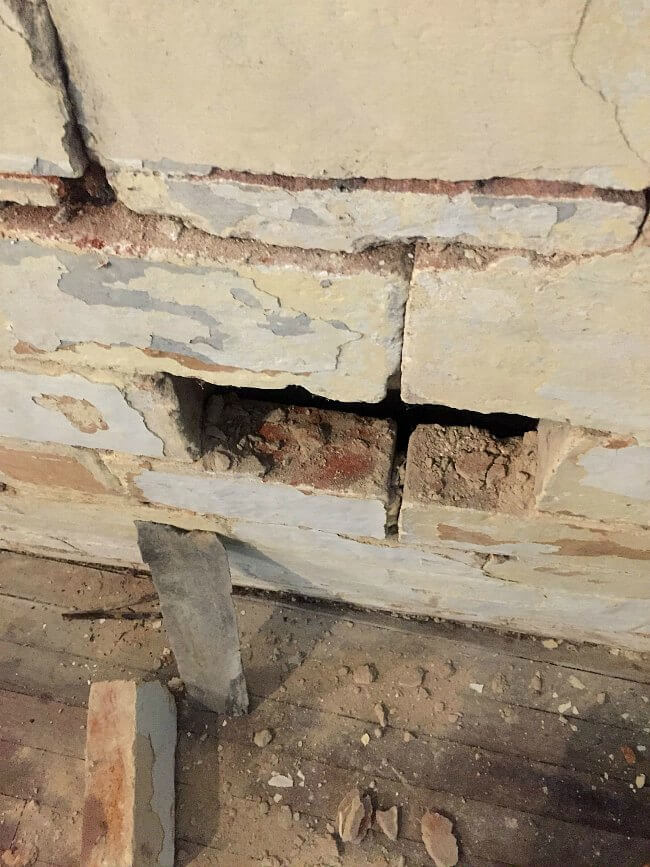 First thing they did was cut a groove along the mortar line one course of bricks above where they were going to work. The brick masons inserted a twisted stainless steel wire (more like a rod and I don’t know what it’s technical name is so don’t ask 🙂 They then glue it in finishing it to look like a mortar line. It was to act as a lintel to hold the upper bricks in place while they removed the ones below. 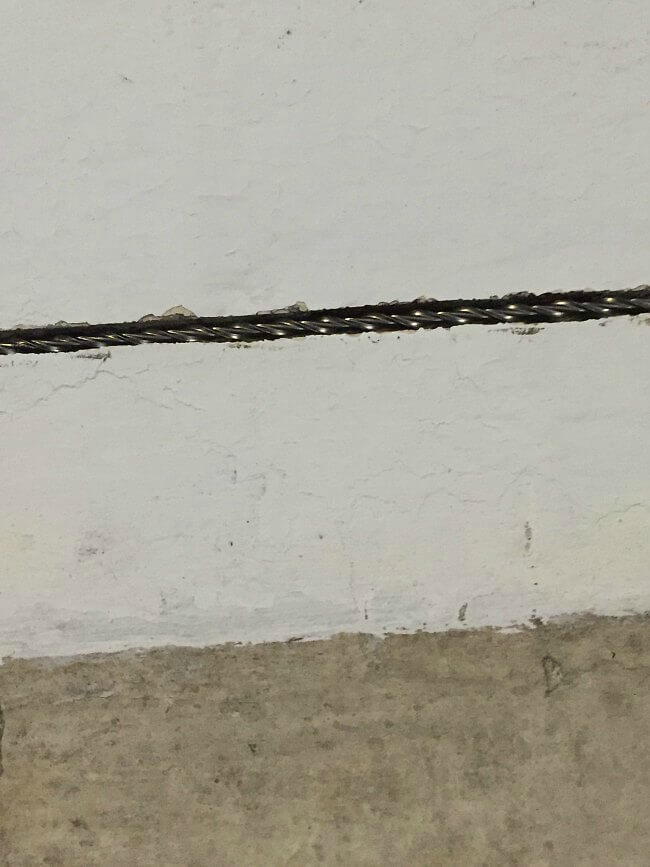 A few days later the repair work began. The bricks came out easily with just gentle persuasion here and there. Imagine our delight when we realised that all the old bricks bore an Ipswich frog! (A frog is is the indentation in a brick, normally where the makers name is stamped.) What a wonderful piece of history. I had seen an Ipswich frog before but never hundreds of them. Maurie said he had obviously seen Ipswich frogs before but he hadn’t seed a pattern quite like this. The size and the composition of the bricks also suggested that these were 1860’s brick he believed. 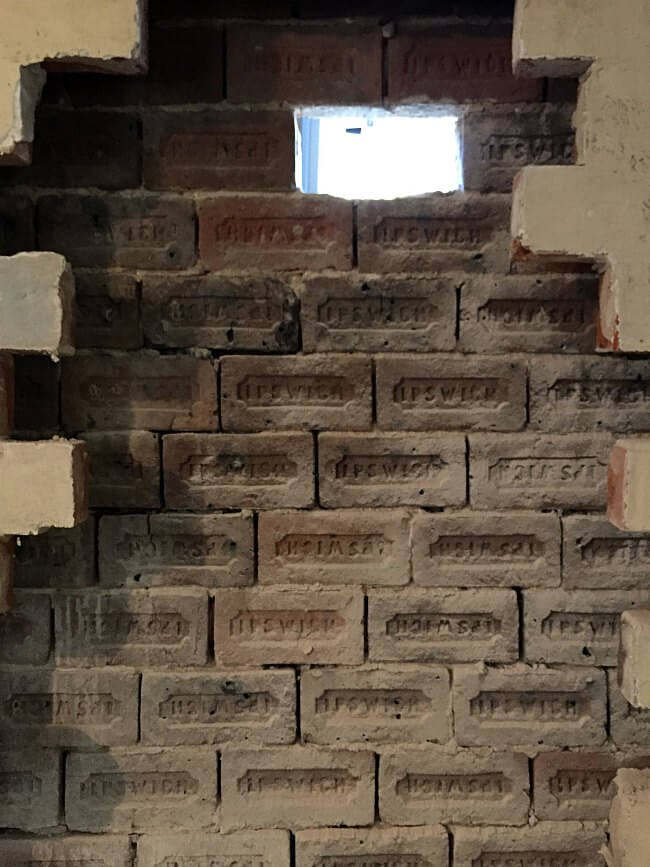 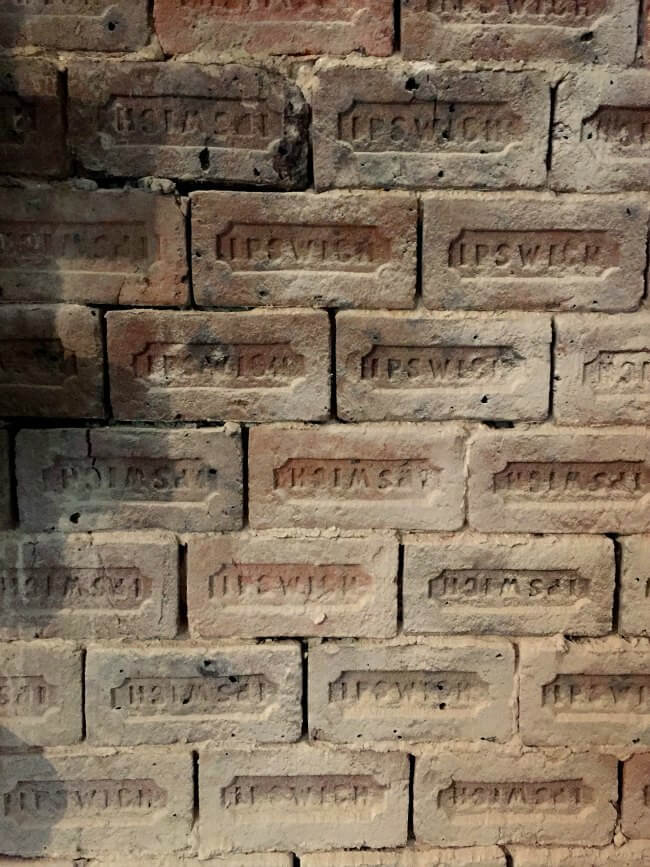 The brick masons worked in pairs for three days. Each day they tackled a third of the wall taking down first the inside then the outside walls for about a metre or so before rebuilding the outside up so high then the inside to match. 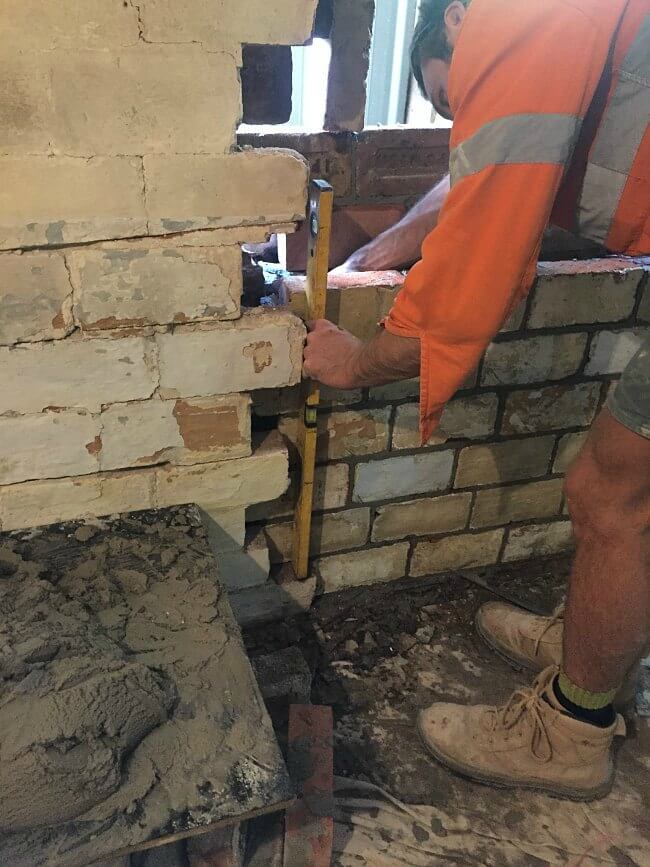 At the end of the first day it was obvious that the old wall was way out of plumb as you can see in the photos below. Wait till you see the day 2 photos. OMG! 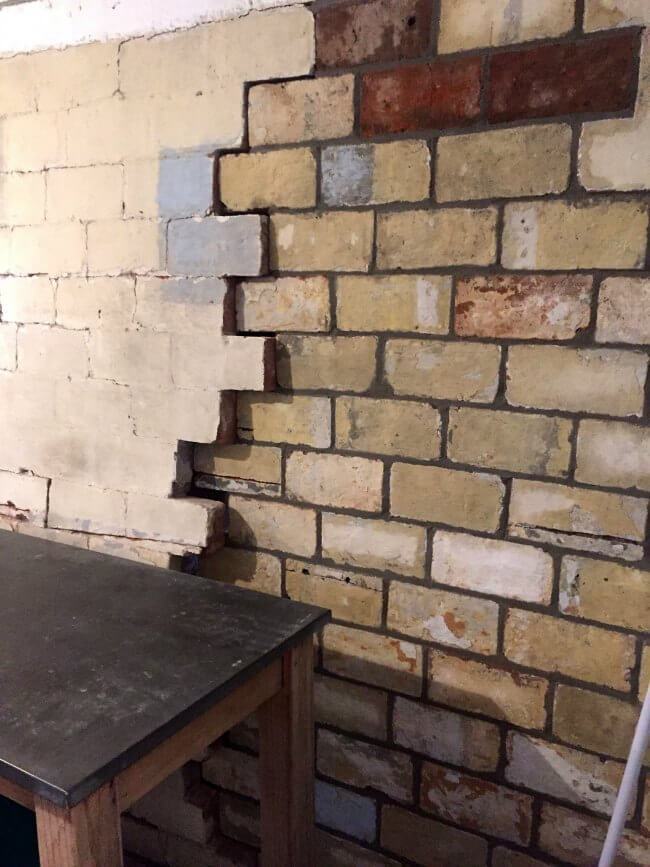 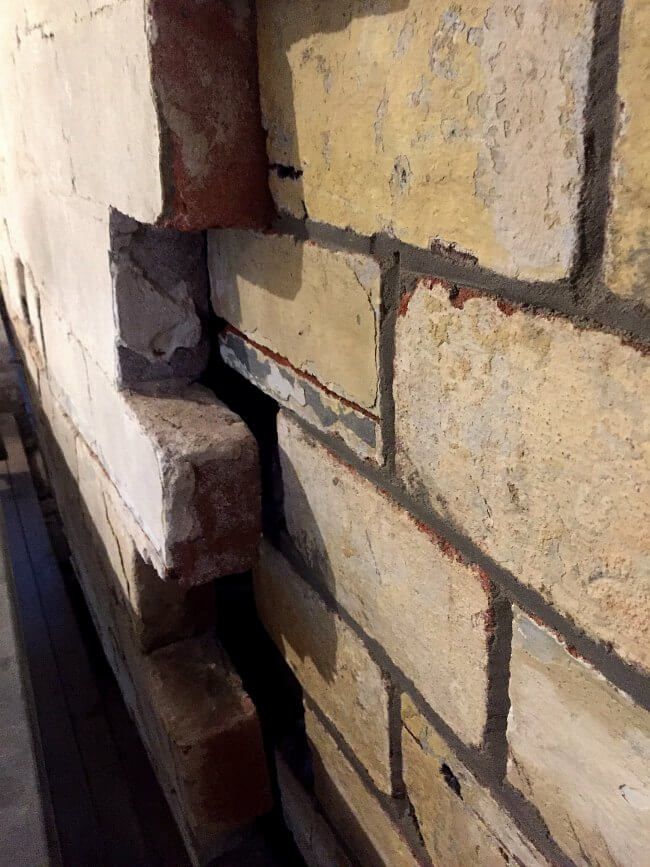 Just a few more shots of my new bedroom 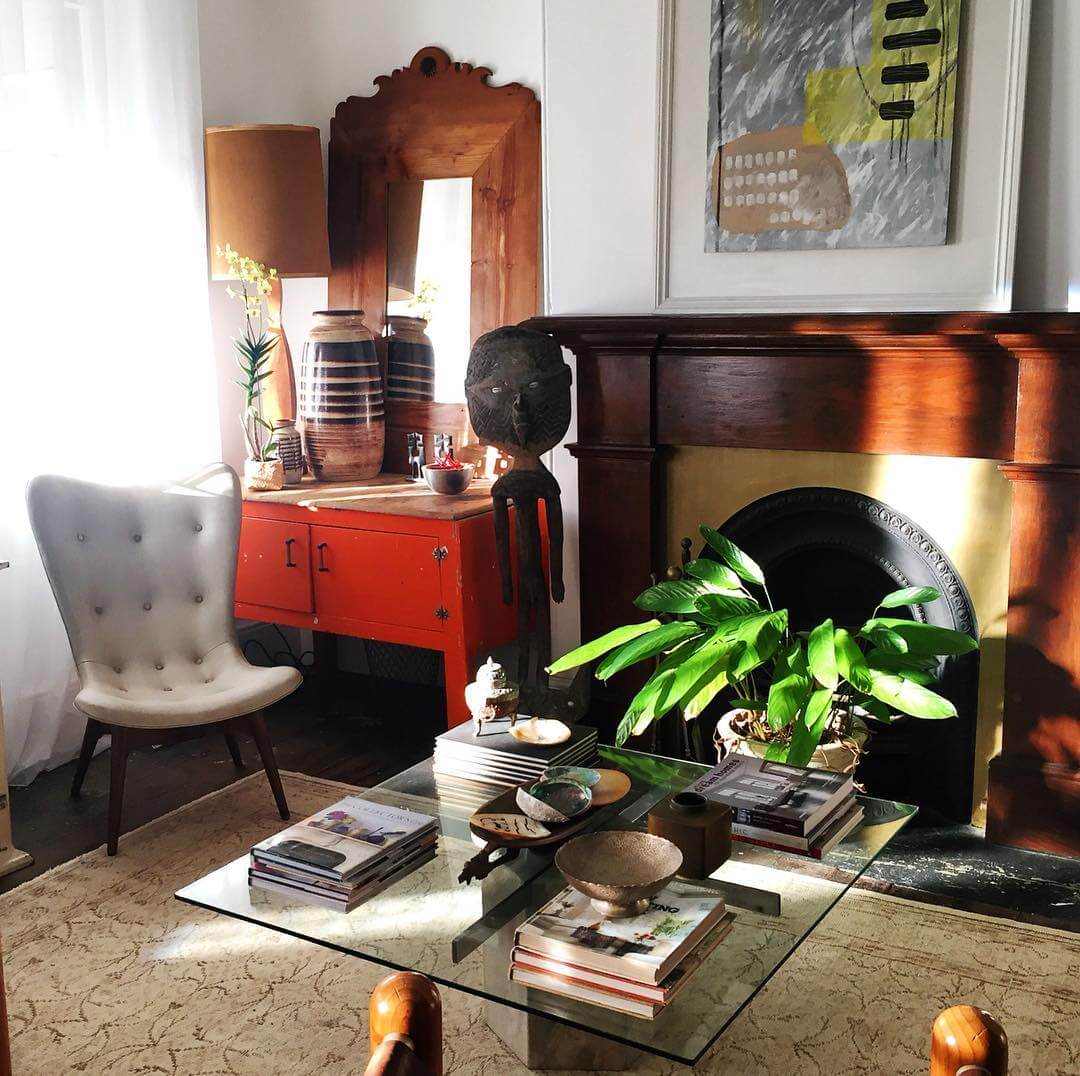 Sometimes I miss the dark side. I miss my black bedroom. The drama. The soft, rich blackness. Then the early morning sun streaks across the white bedroom walls and I’m fine with the change. Besides a third of the old black bedroom is scheduled to become an upstairs bathroom in the new year. Ooooooh black bathroom! 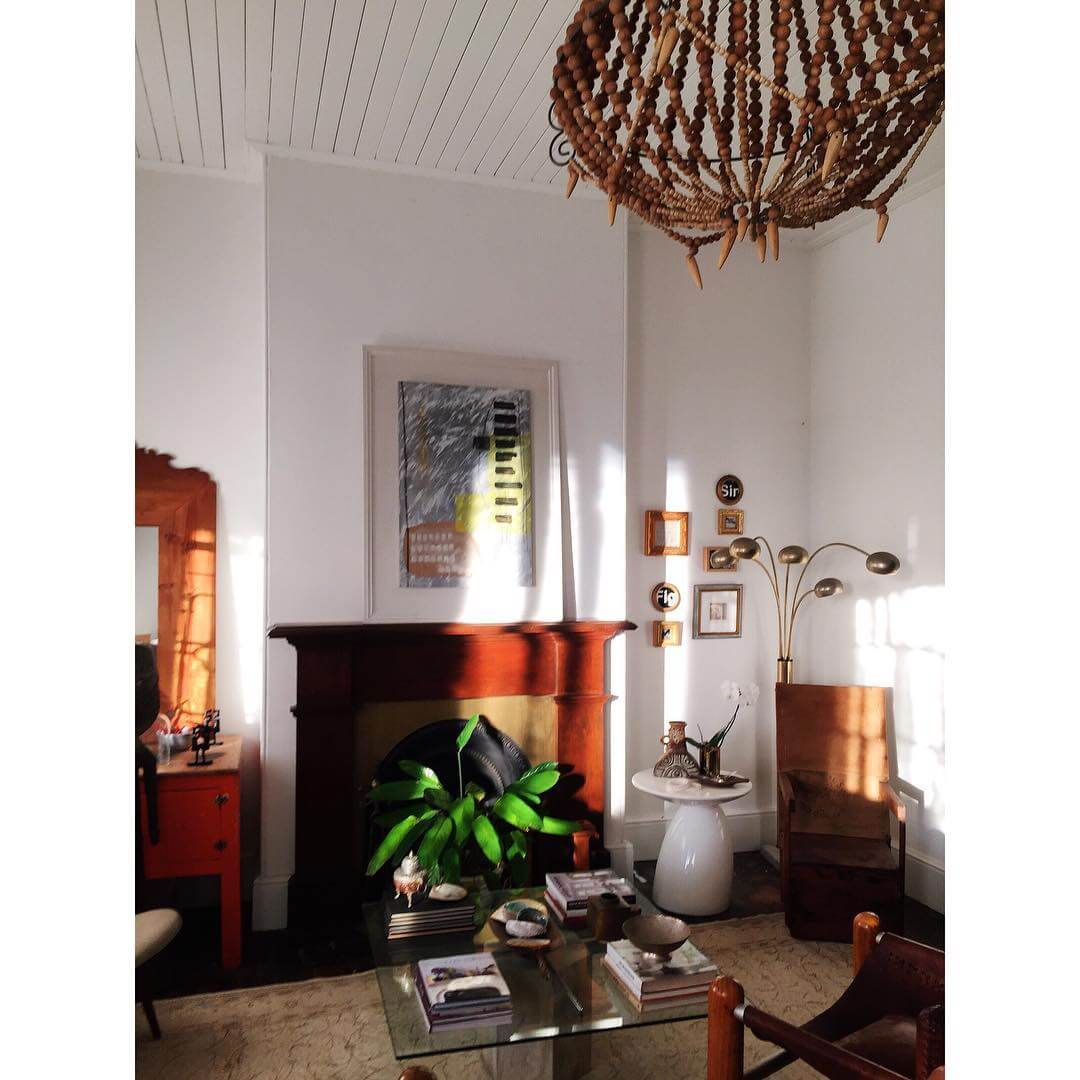 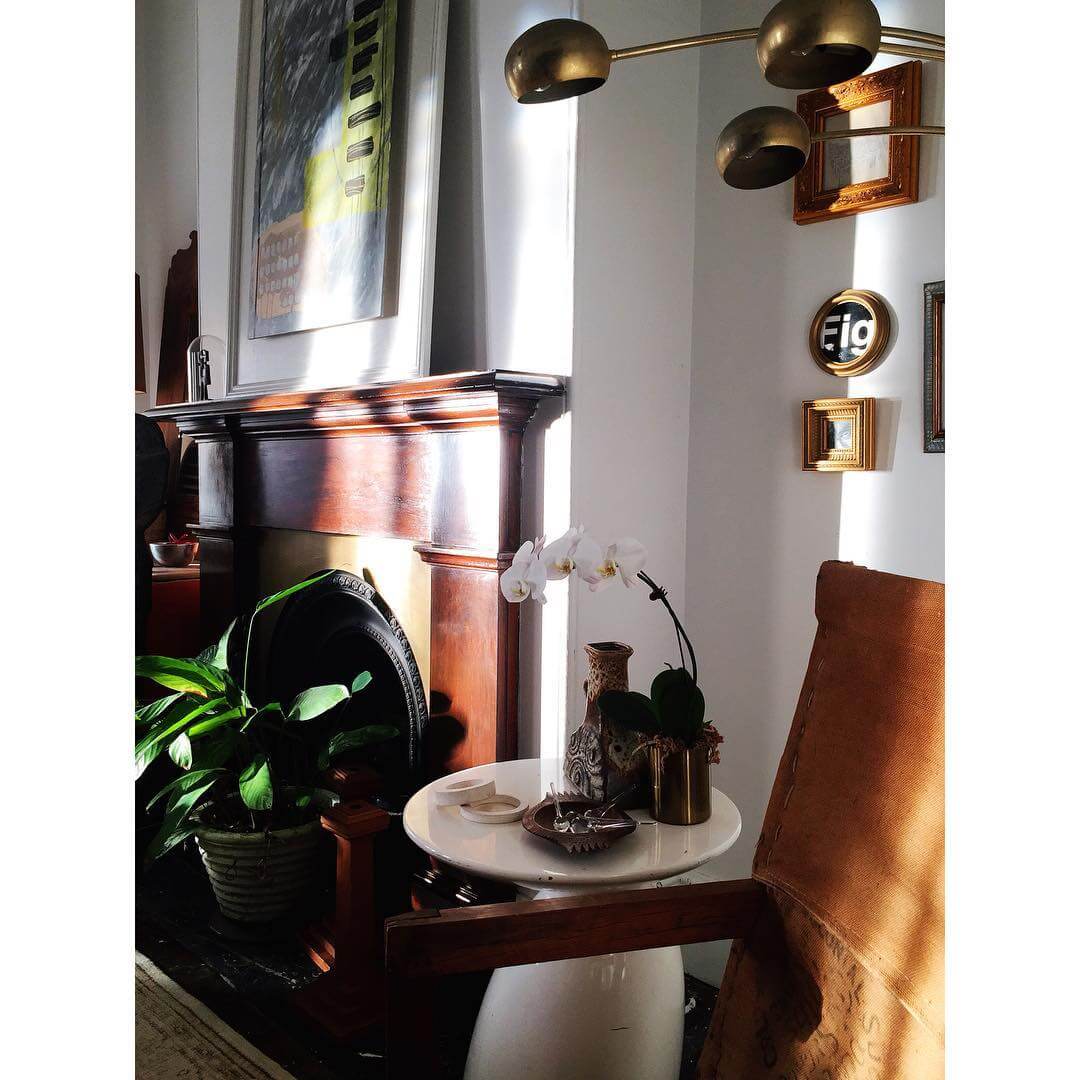 The latest member of the family 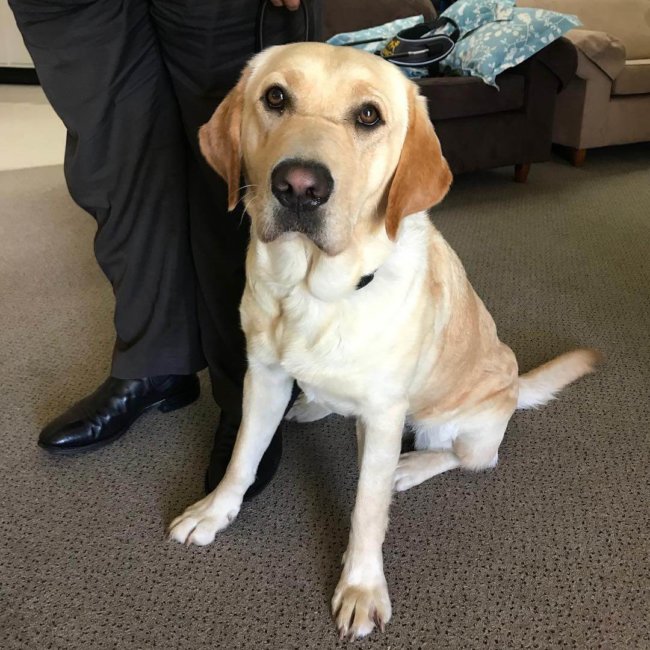 Her name is Courtney and she’s Kelvin’s new guide dog. Seems like she is settling in nicely. 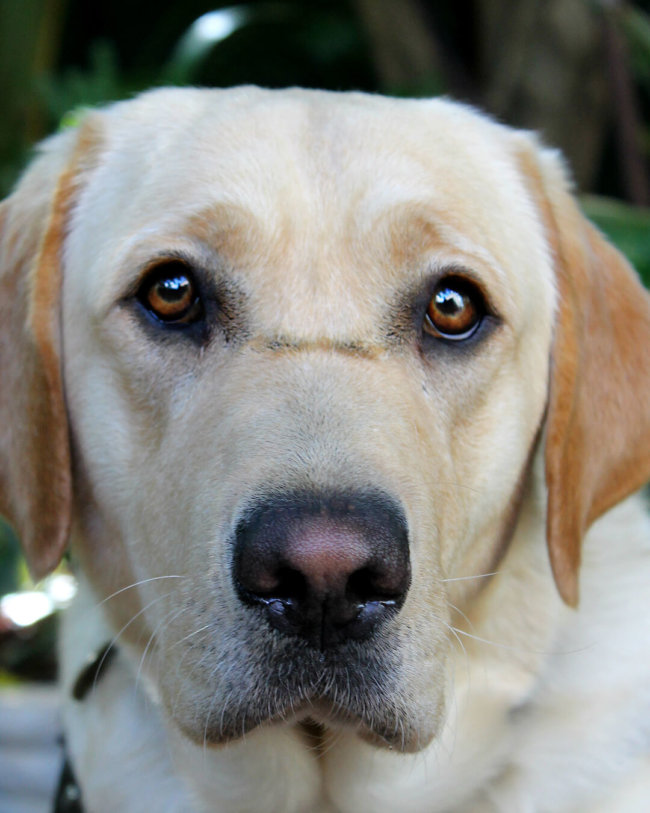 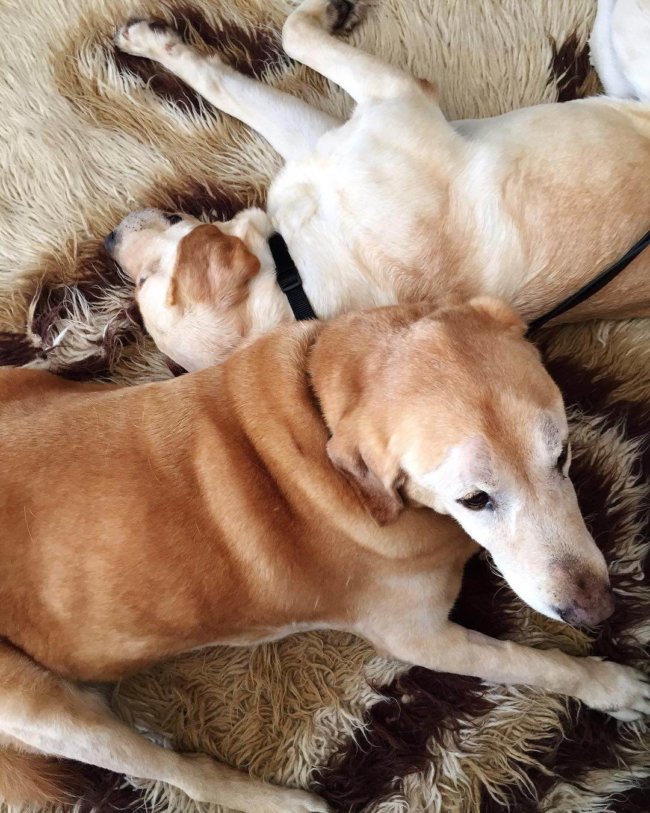 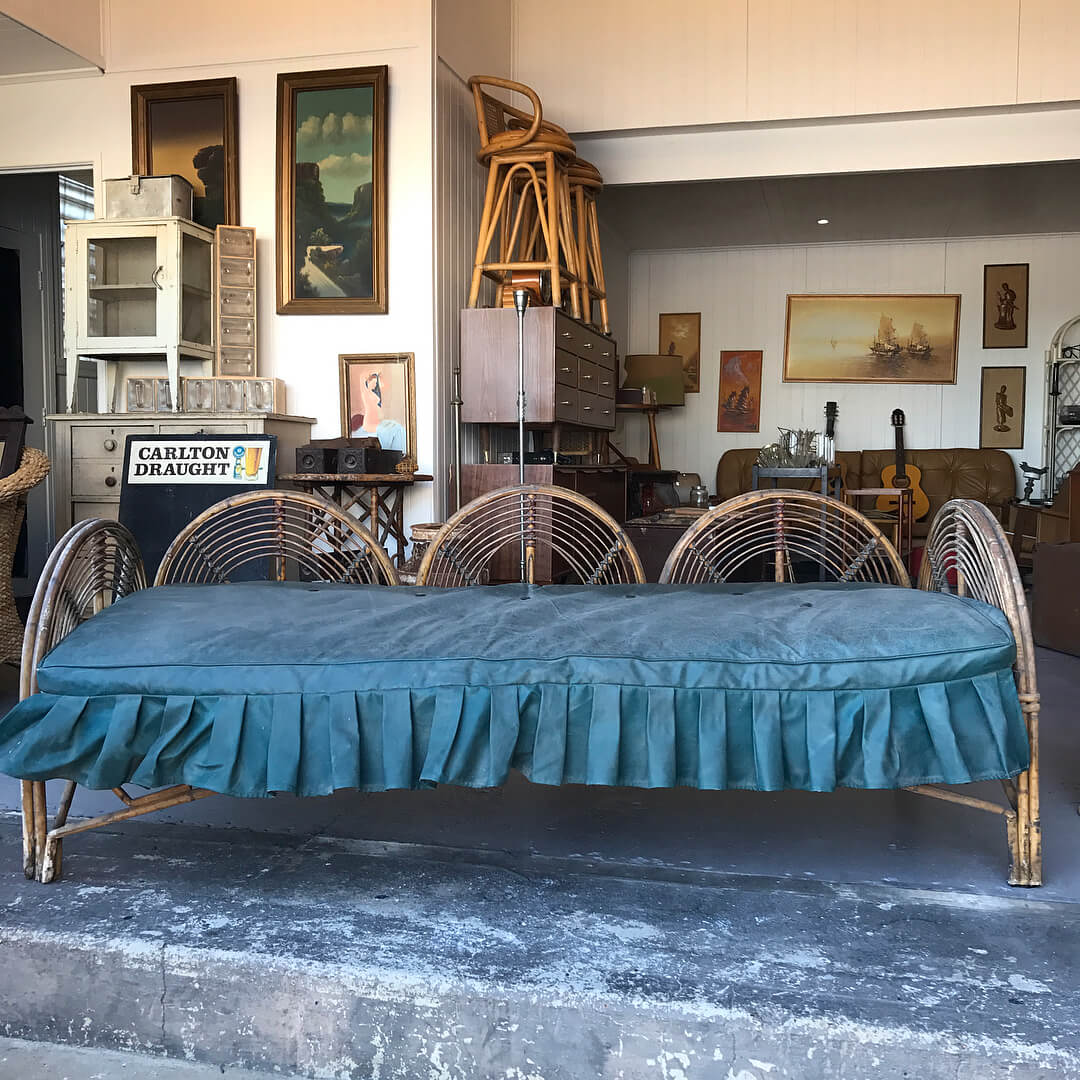 So I may or may not have bought this old cane daybed back in September last year. OK I did buy it but was only $80. I cleaned it up, repaired the breaks and lost bindings (not too many thankfully) and should have given it a coat coat of shellac and maybe have had a new a new mattress made. 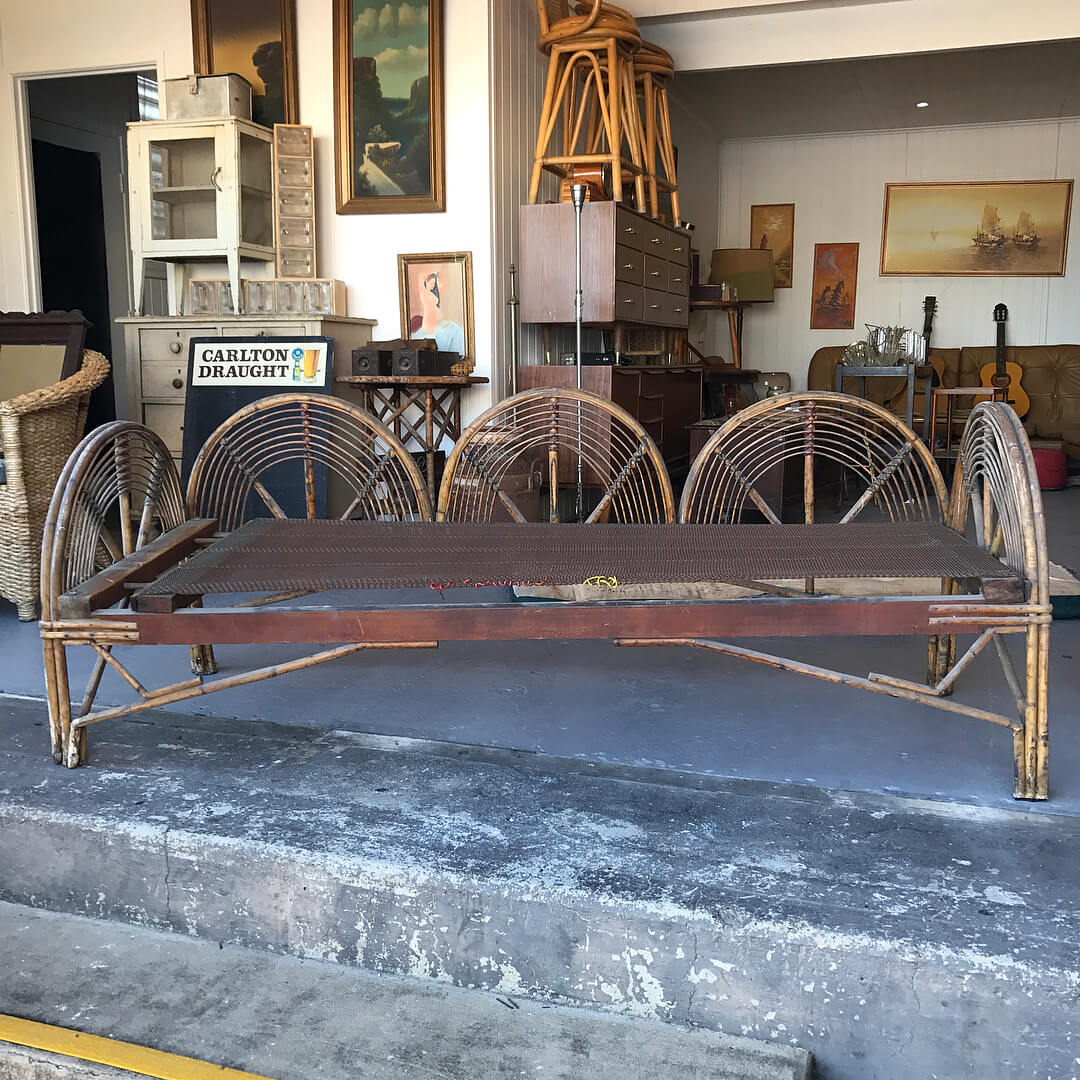 Skip forward to now and I realise I’ve never shared it with you. The reason is because I never really finished it. The breaks and bindings are done, I sanded it back but then I lost interest because it was a big job up until then and I was over it. It was sitting in my bedroom without its coat of shellac and I’ve thrown some cushions on it that I had in storage and it will do for now. Here are the only shots I have of it (from my instagram) … poor unloved little daybed. 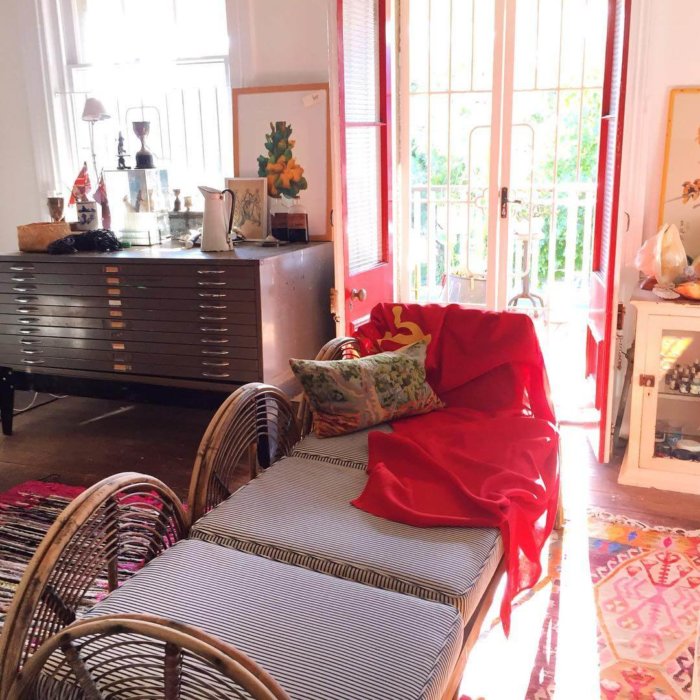 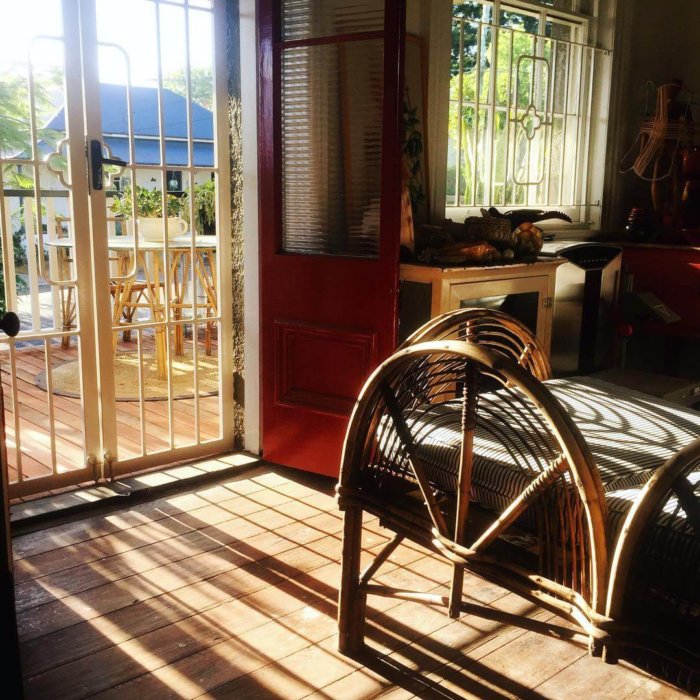 And one from when I was rearranging rooms, moving furniture all over the place for a sponsored post here. It’s now sitting in my office waiting for all the renovations to be done to find its perfect spot. 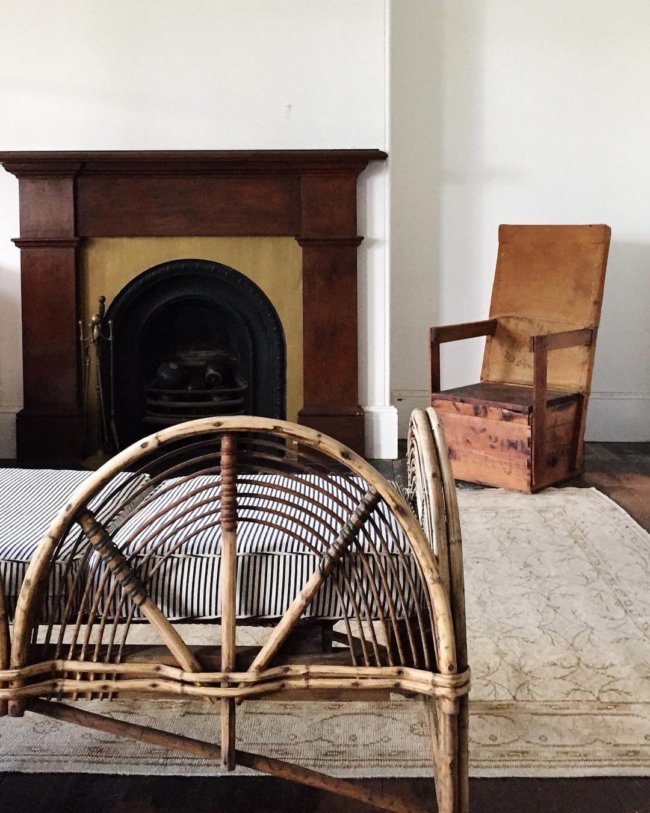 A fight over an old zinc bathtub 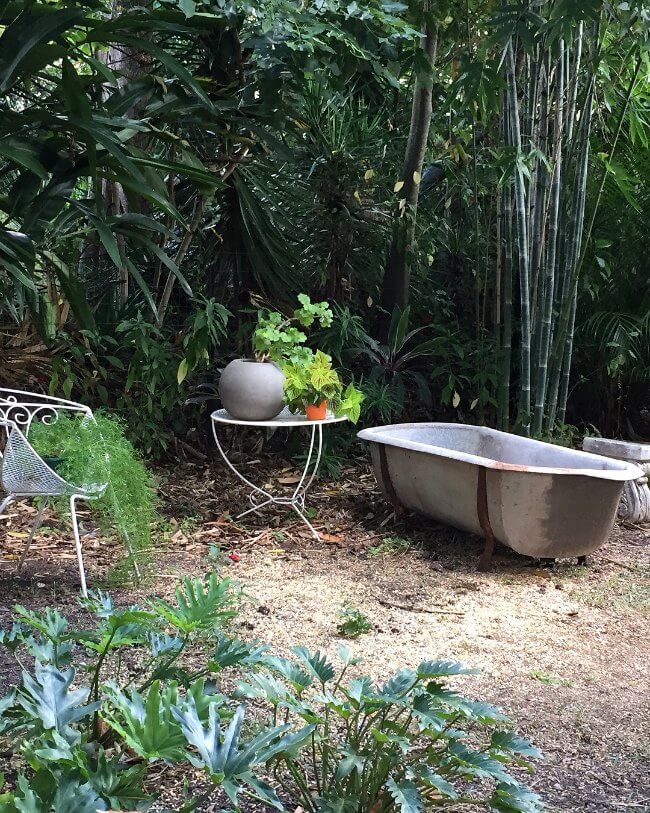 Kelvin wants to fill it up with warm water and bubbles and listen to the football or cool down in summer with a cold dip and a cold beer but I bought it for the old stables bathroom. I’m imaging soaking by the fire, a glass of champagne in hand, lost in the shadows thrown by this Murano dragon’s tears chandelier. 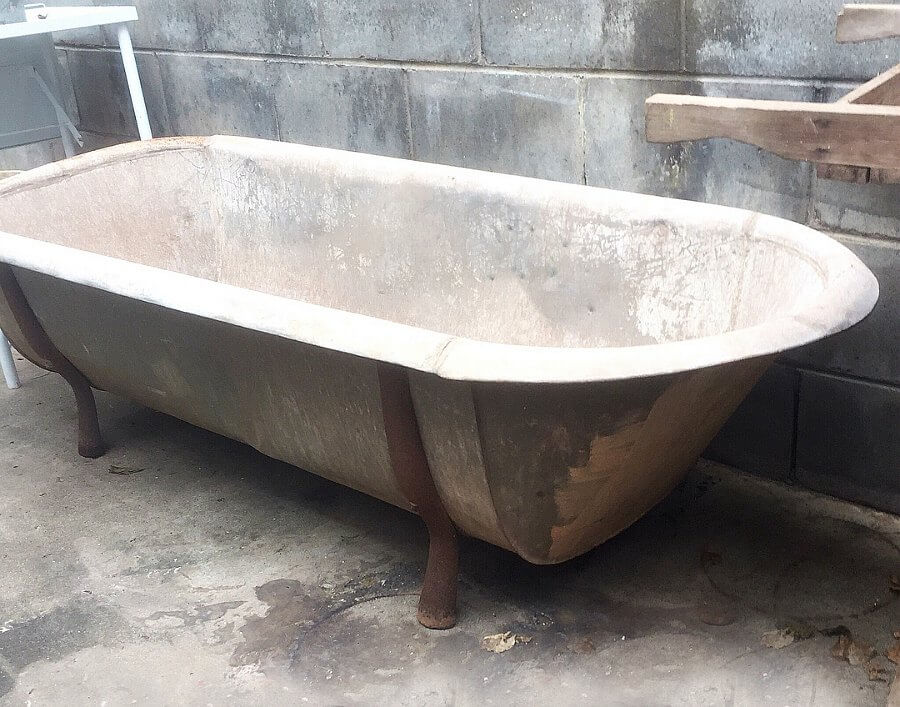 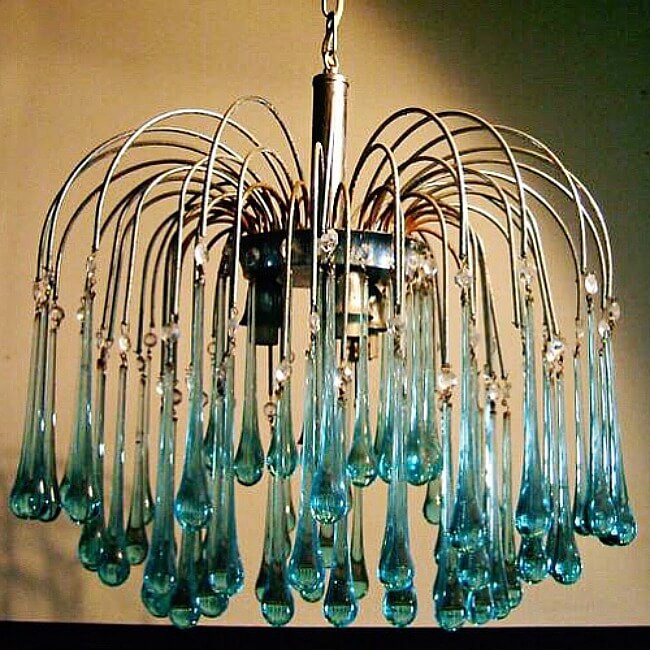 It started with a rug … my new bedroom

Where I blog … my office