And here she is

Ta da! So much better. Notice how the colour changes with the time of day.

Bottom two steps waiting to be fixed then they’ll be painted. That ugly grey box is for our broadband internet service. Wonder if I can paint it? Here’s one of the french doors onto the verandah in its new red paint.

And the front door while she was getting her first coat of gloss. 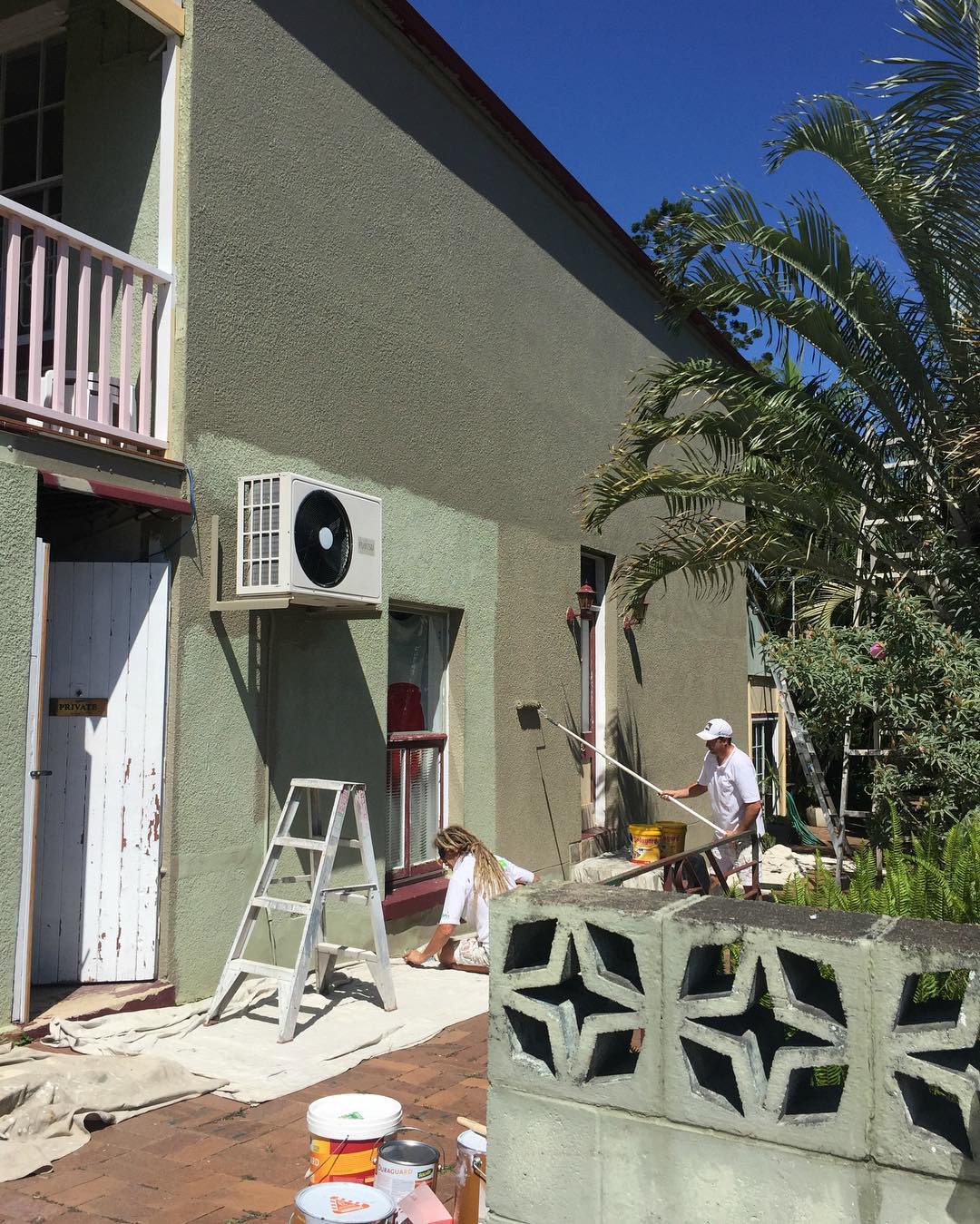 I’m getting excited. It’s really happening. Thought I’d drop by with a few progress shots of painting the old girl. 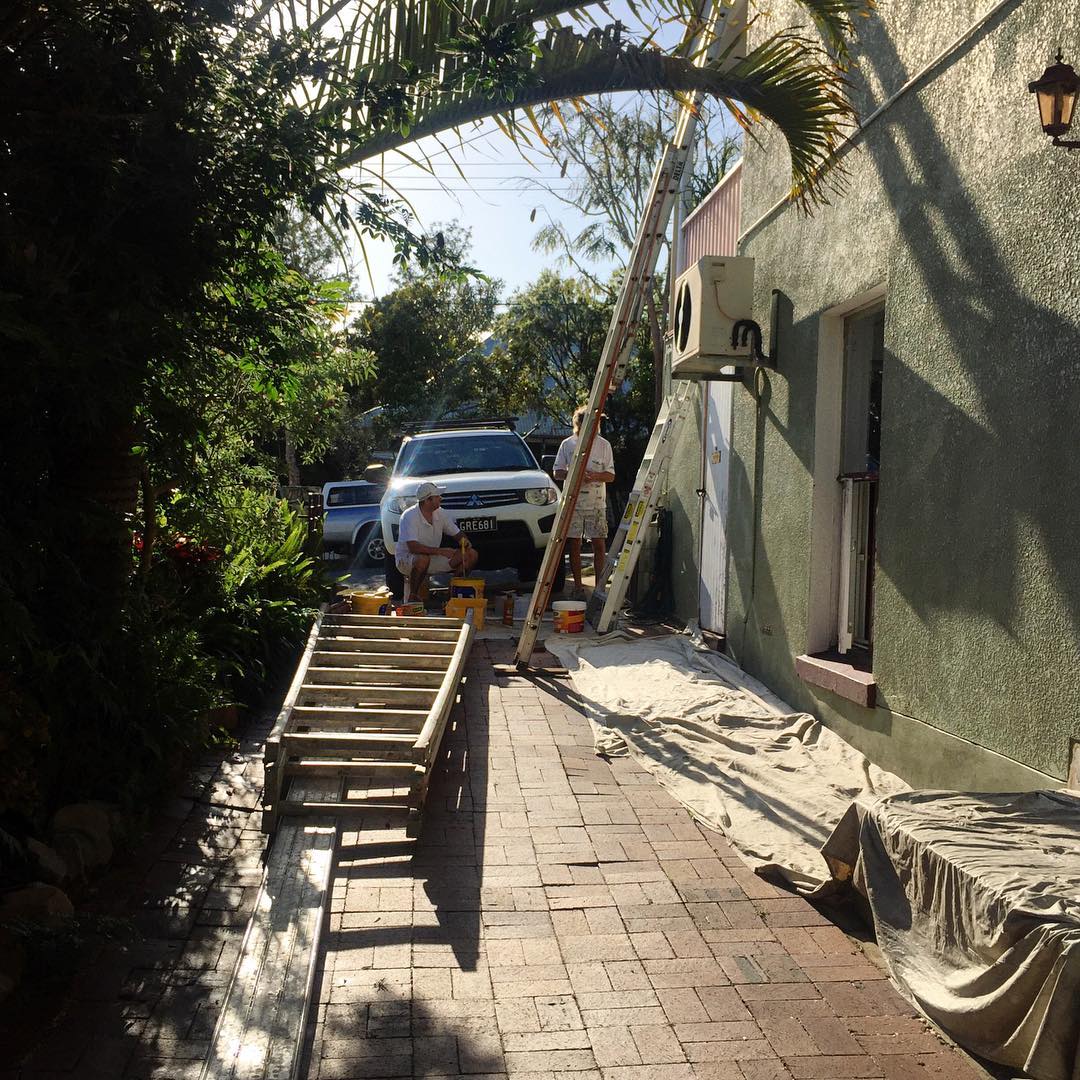 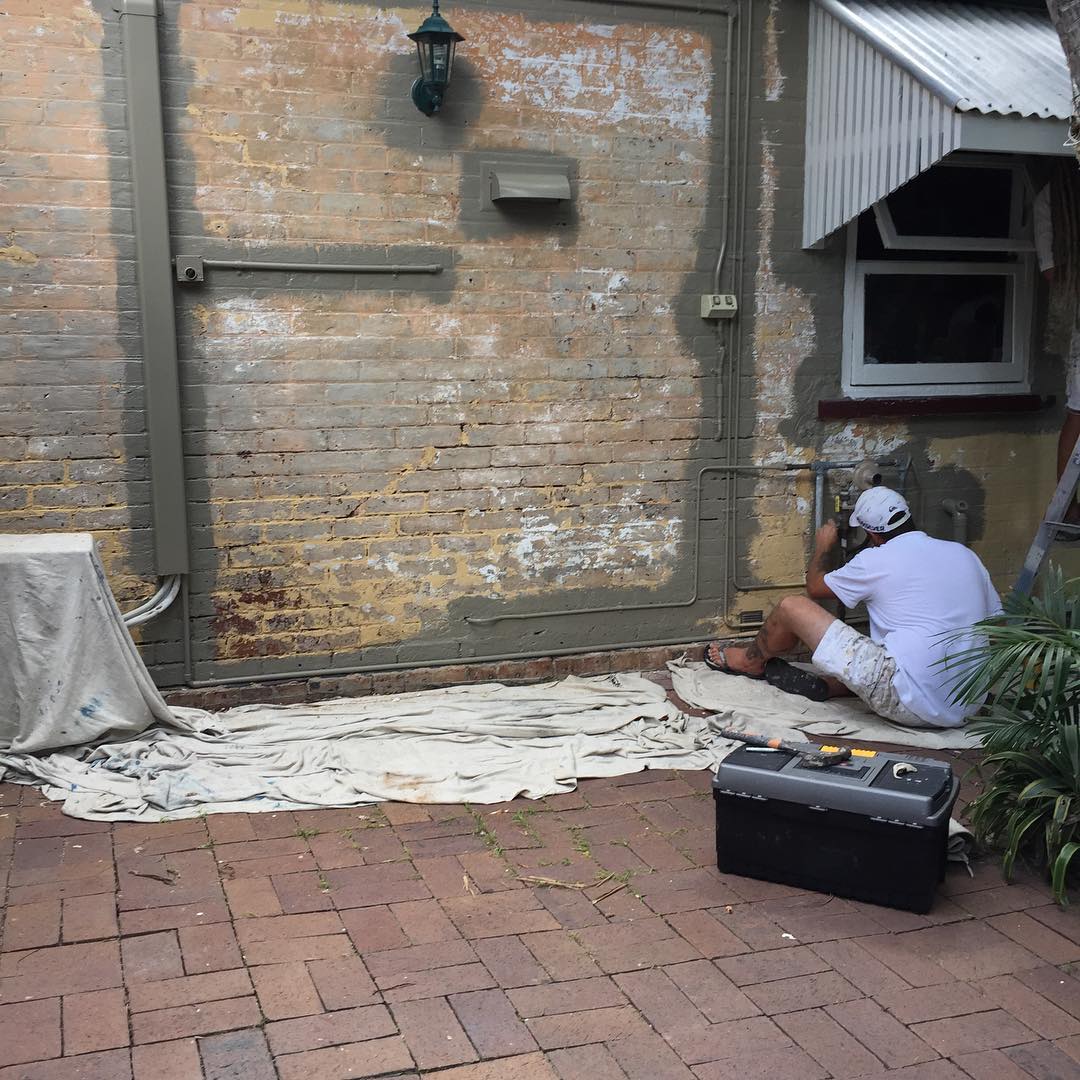 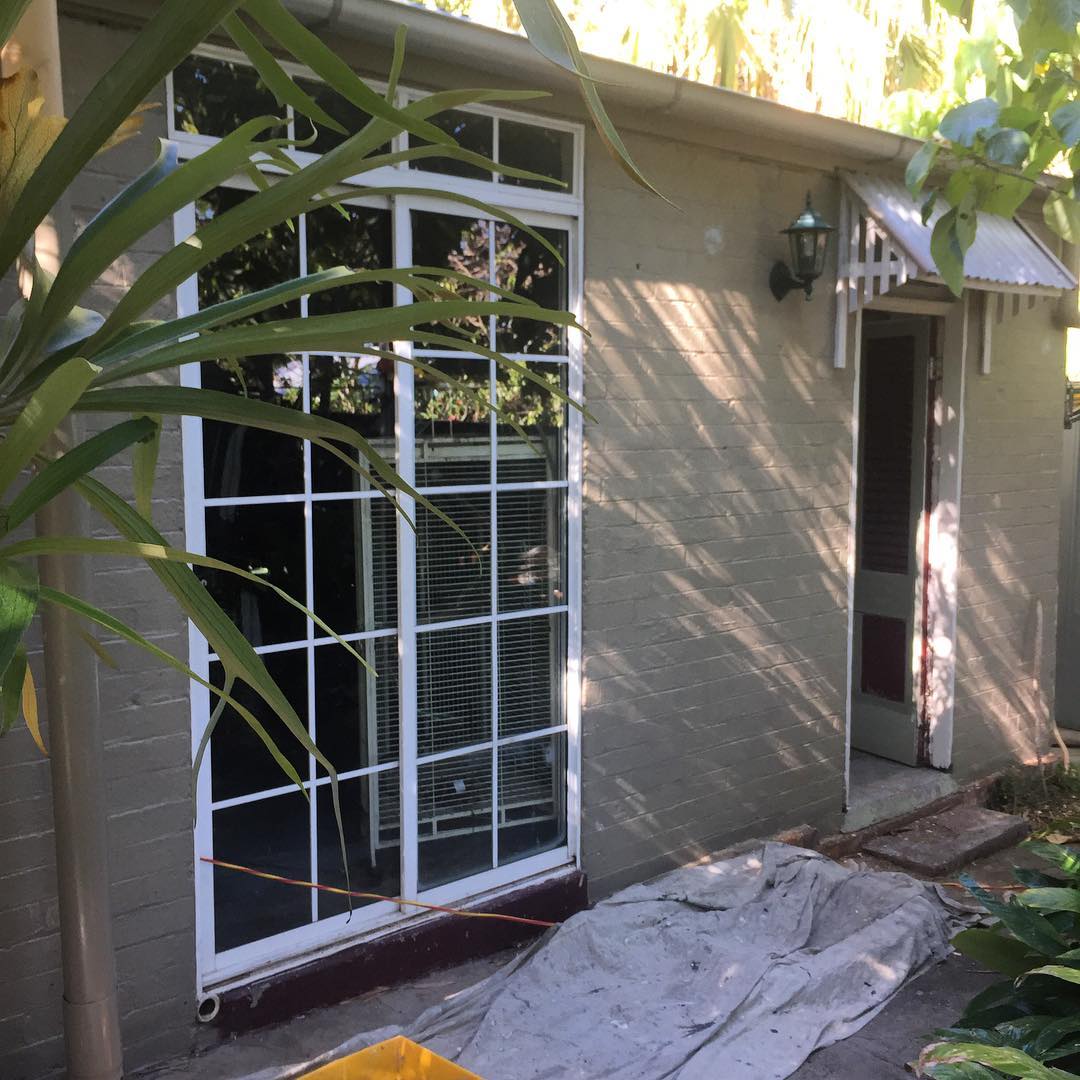 Looking good! Of course when you start one job you always find something else you need to do. After 150 years the bottom of my non standard size cedar front door was rotting. The rest was still in great shape. Thanks to family friend John a new section was built. Good as new! 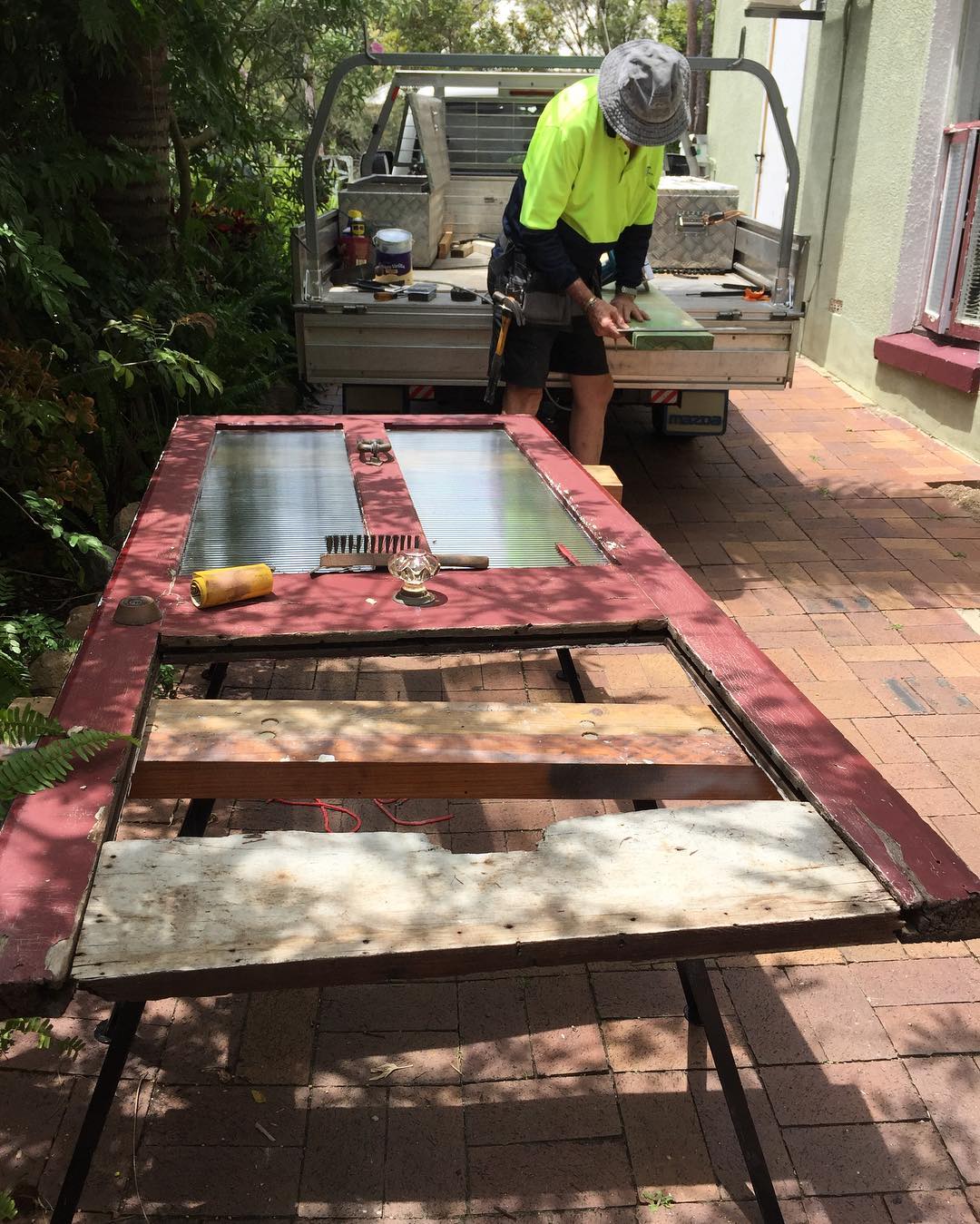 Not long now until the big reveal. Can’t wait to see house in her new coat of paint.

The old girl gets new paint

… then we replaced her railings to something more appropriate for her age. And then …

Yes after a hiatus that lasted FOREVER we have started our renovations again. It’s time to give the old girl (I can’t call her the new old house anymore as we have lived here for almost 6 years now) a new exterior coat of paint. Of course even that took forever to arrange. There were infinite paint choices, a little thing about sorting out the finances to see if we could stretch the budget to include a new kitchen and a bathroom and then there was the matter of a painter. After my horrendous painter experience in the past I was just a little bit wary about the whole process.

First let’s talk about paint colours. I live in a heritage house but not a heritage listed house … thankfully. My neighbours 2 doors down live in a house built in the same year as mine and have a heritage listing. They are doomed to forever live with a strange salmon coloured pink house with a red brown trim. I think you can see from my previous post that heritage colours of the time included a rich red brown, Brunswick green, burgundy and a clotted yellow cream that would give you high cholesterol if it was an actual food. Because the old girl wasn’t listed I could paint her any colour I wanted, within reason. I’m sure I could have painted her black and people would have raised their eyebrows but they would not have been able to door anything about it. I didn’t want to paint her black.

I wanted to paint her a colour that sat easily with the dark brown bricks she was built from. Ideally I would have liked her to be all bare brick again but it wasn’t possible to get all the cement render that someone smothered  two sides of her in the 60s. To do so would have damaged the old bricks underneath. There was the chance that we could remove the paint from the kitchen wing as it seemed to be only painted not rendered. Enter Costa, a family friend, who spent a Saturday blasting paint off with a high pressure hose. It appeared to be working. There was a chance we could strip back to brick.

Then we hit the part of the building where they had bagged the brick in an attempt to cover old damage. No getting that shit off. Bare bricks 0 painting in our future 1. Friends kind of liked the shabby brick look that resulted from the pressure wash but I knew it would do my head in. It had to be painting. (P.S. Be warned pressure blasting paint off walls is a VERY messy business. VERY. I’m still cleaning up little flakes of paint from all over the garden.)

Inspiration photo I found on Lonny.

Now I was talking about colours wasn’t I? I hopped on the Dulux paint app and started saving favourites. Here are a few I considered.

As you can see they all fell within a brown meets khaki green palette perhaps with some mushroom thrown in. I knew I wanted a colour for the main walls to work back with the brick. I wanted an even darker almost black colour for the guttering, sills, verandah railing and anything else horizontal, vertical elements and windows in a white and the two main doors in a red. Off I want to Bunnings and came home with some sample pots, slapped some paint up on the wall and decided on Army Issue. Here is where I tell you the cautionary tale about paint colour apps, paint chips, paint sample pots and wall brush outs. None of them look the same. The app colour looks nothing like the paint chip which looks nothing like the sample pot when you open it or when it is dried on the wall. Nothing. I liked Army Issue. I thought it looked like that soft tan/khaki that is more a desert fatigues army issue than a dark jungle khaki army uniform. When it went up on the wall as the actual colour and dried it was a different colour all together again. My idea that was getting a sandy brown with a green bases with perhaps even a touch of mushroom grey became a full on Army Issue green. Should have realised from the name I guess 🙂 Not what I thought I was getting but I still like it. It changes colour during the day from a warm based grey with a green tinge in the morning to army green during the day and darkens back to a greenish grey in the afternoon shade. I used to say to people giving me a lift home “Just pull in to the green house on the left.” I think I will still be saying that or perhaps a slight change to “pull in to the khaki house.”

The brush outs gave me no idea what was really coming.

The colours I really love are the trim colours. Namadji used on the horizontal trims and gutters is a rick dark brown with a touch of swamp while the white, White Duck Half has a lovely silvery feel. Then there are the doors in Red Box. Yum. But you’ll have to wait till another post to see how it all turned out. 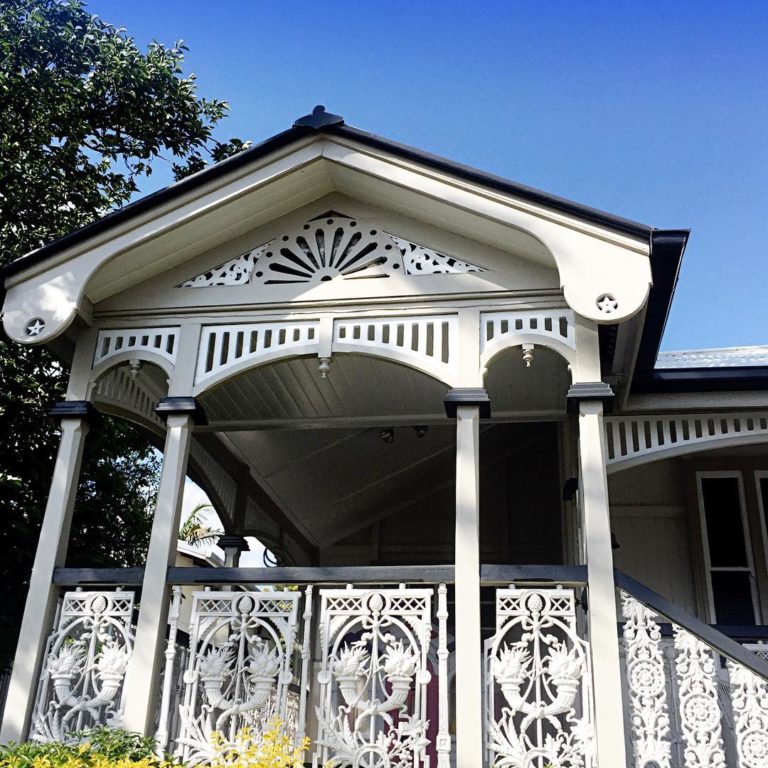 I love living in the centre of an old city, well, old by Australian standards. Ipswich is full of stunning old homes and I’m surrounded by them. Time to meet some more of my neighbours. 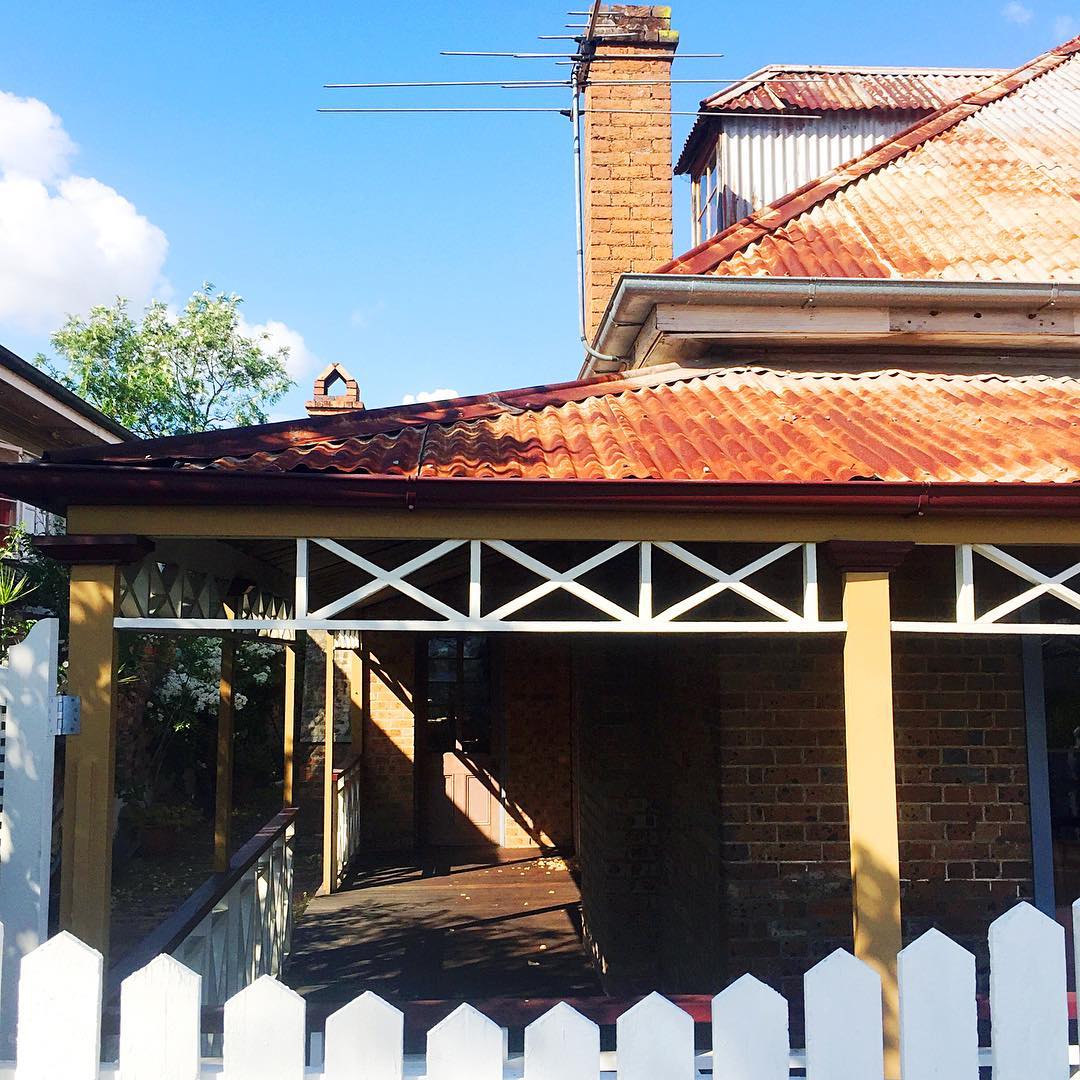 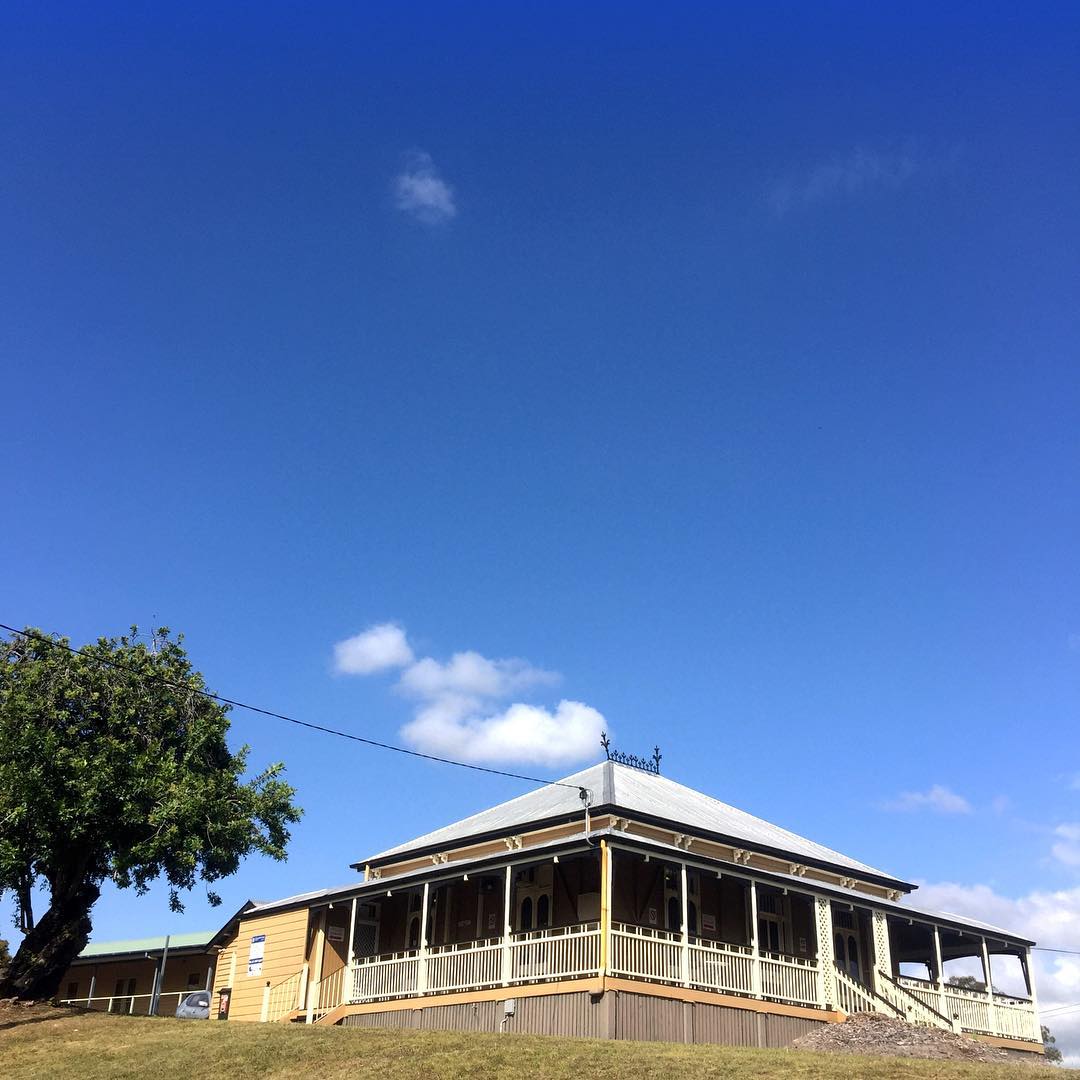 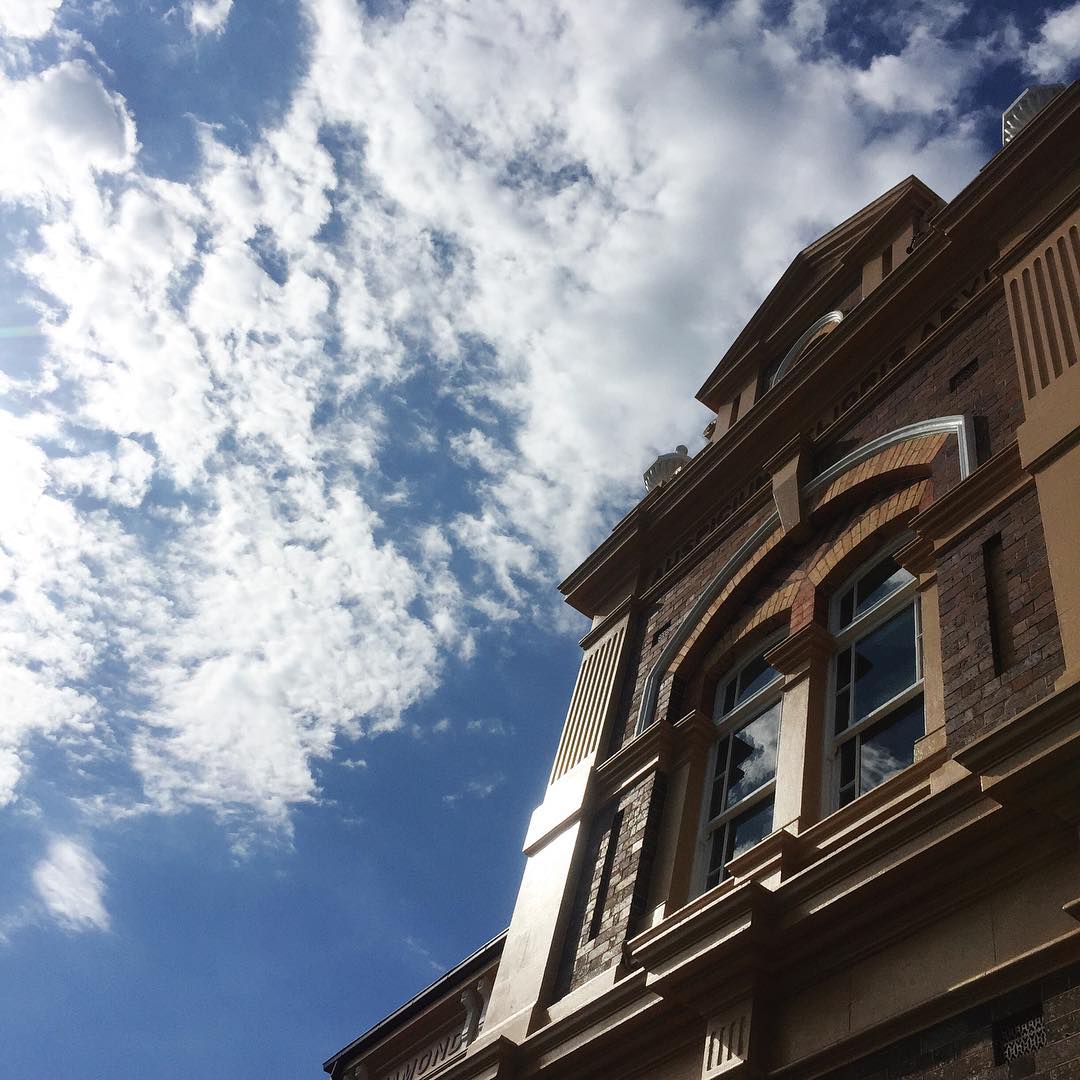 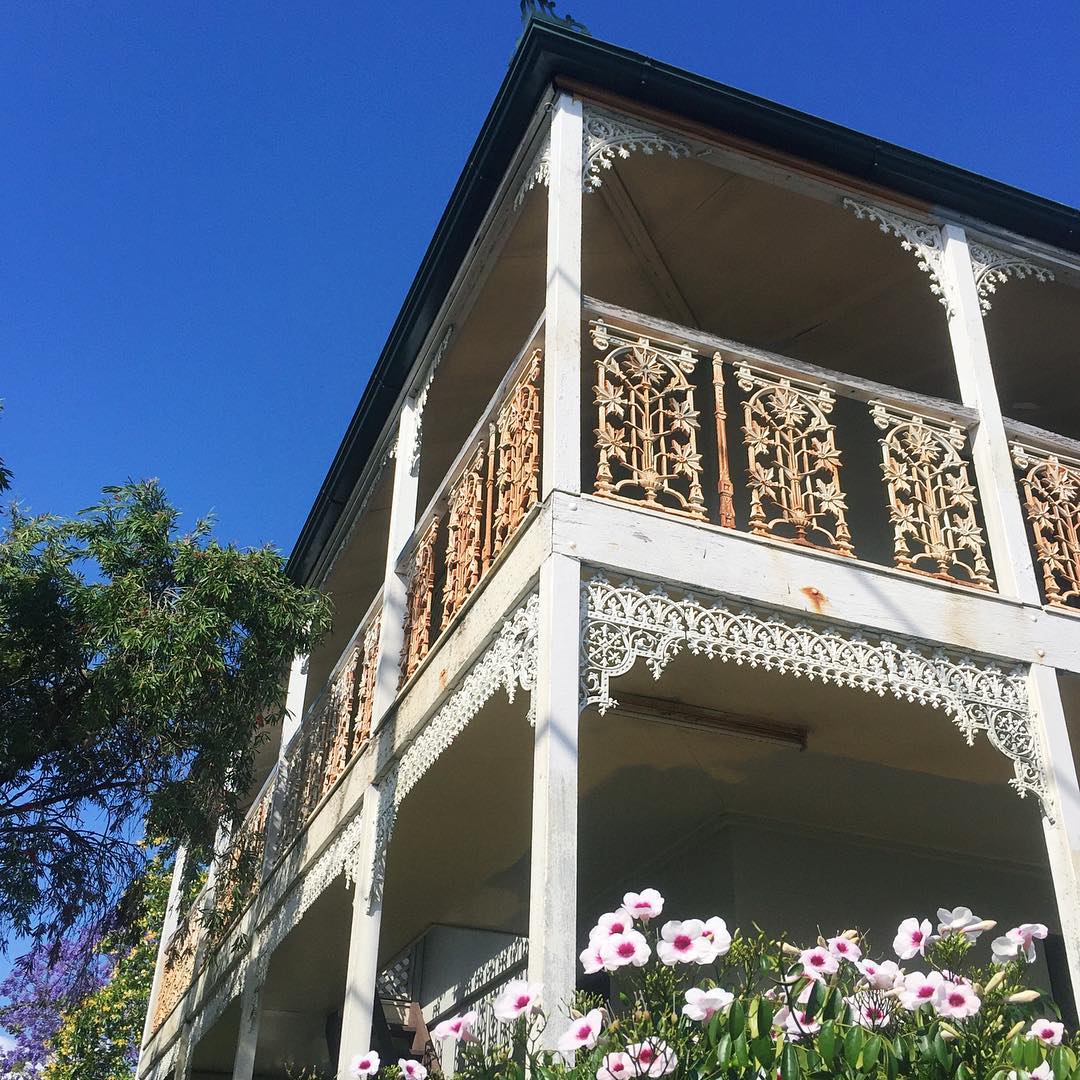 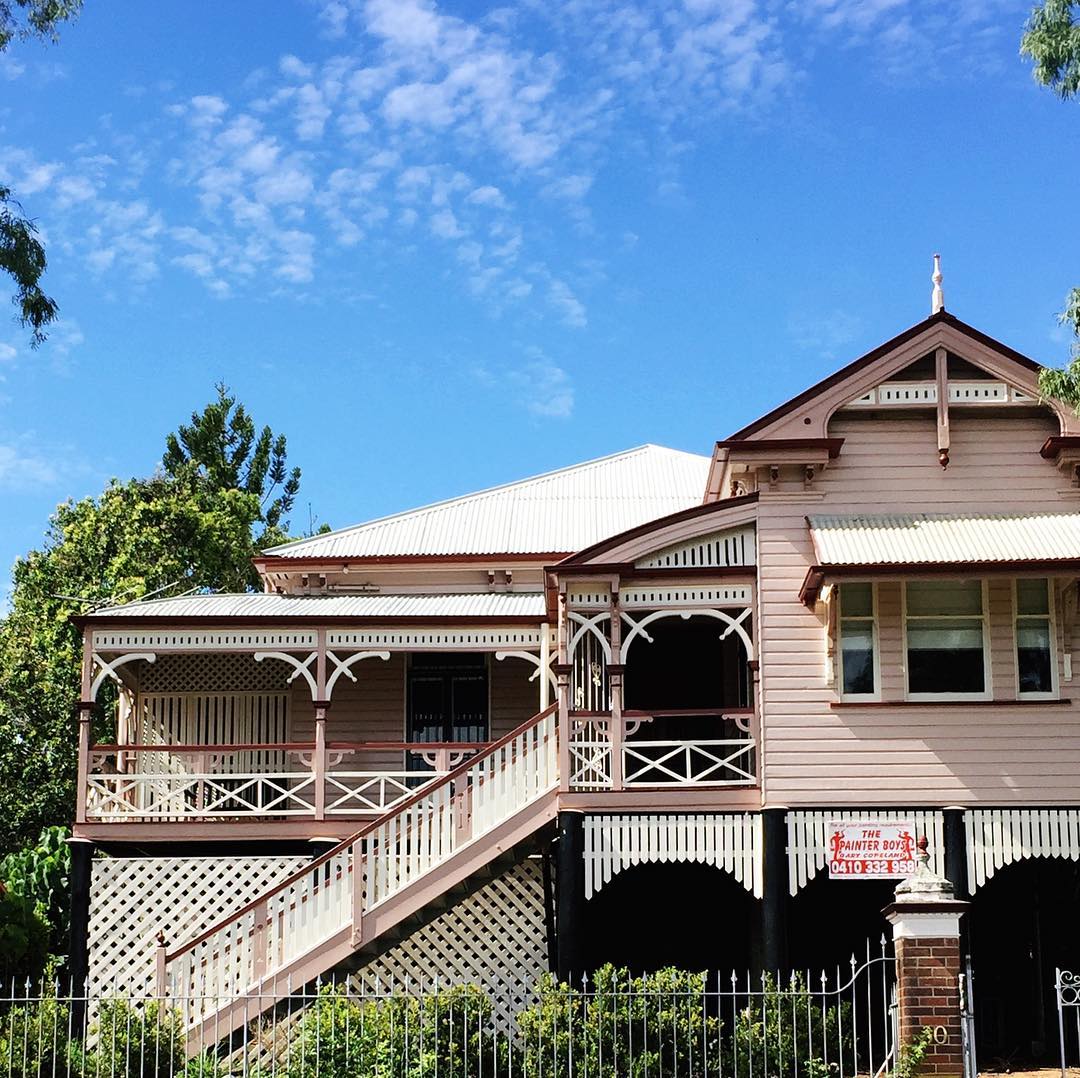 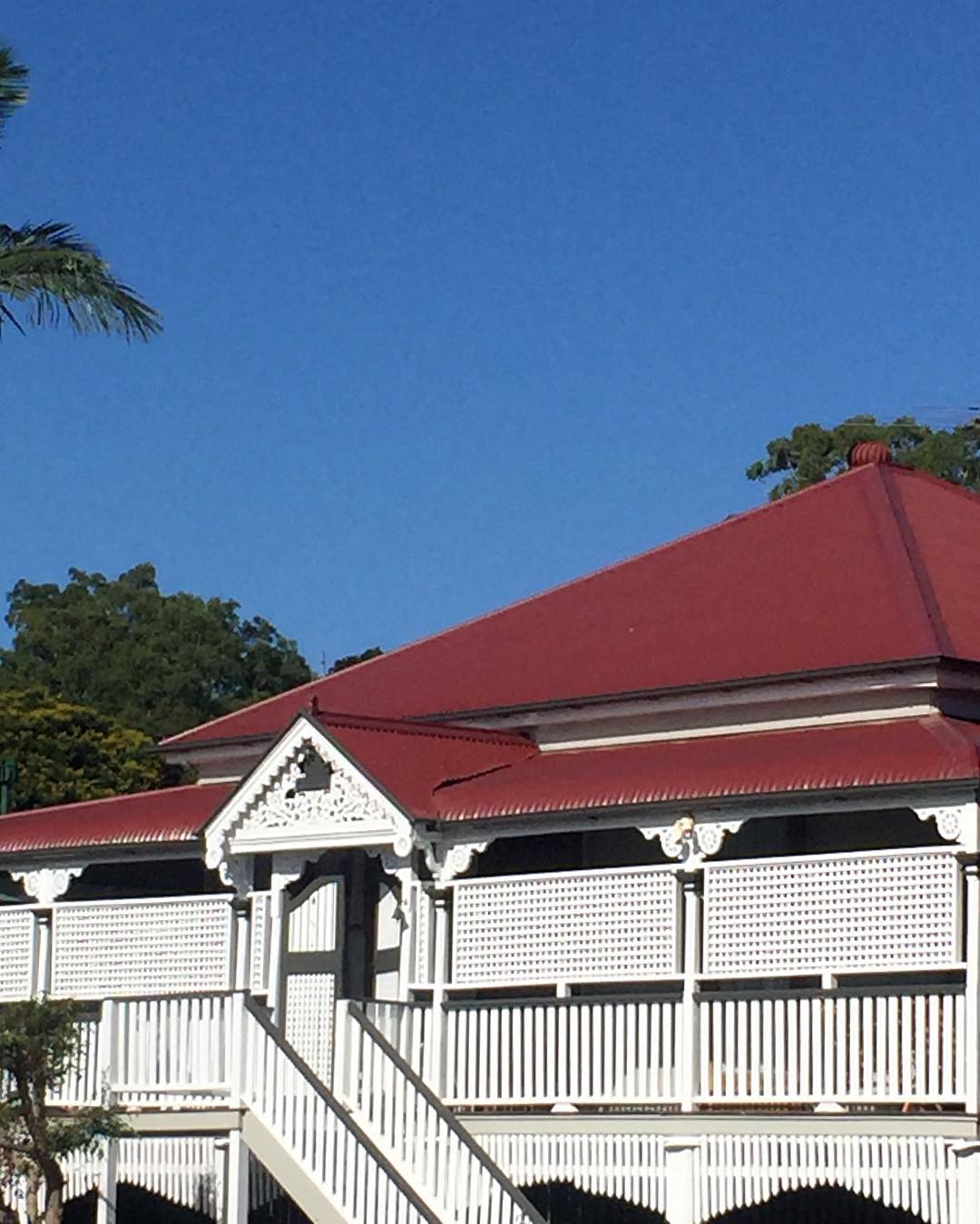 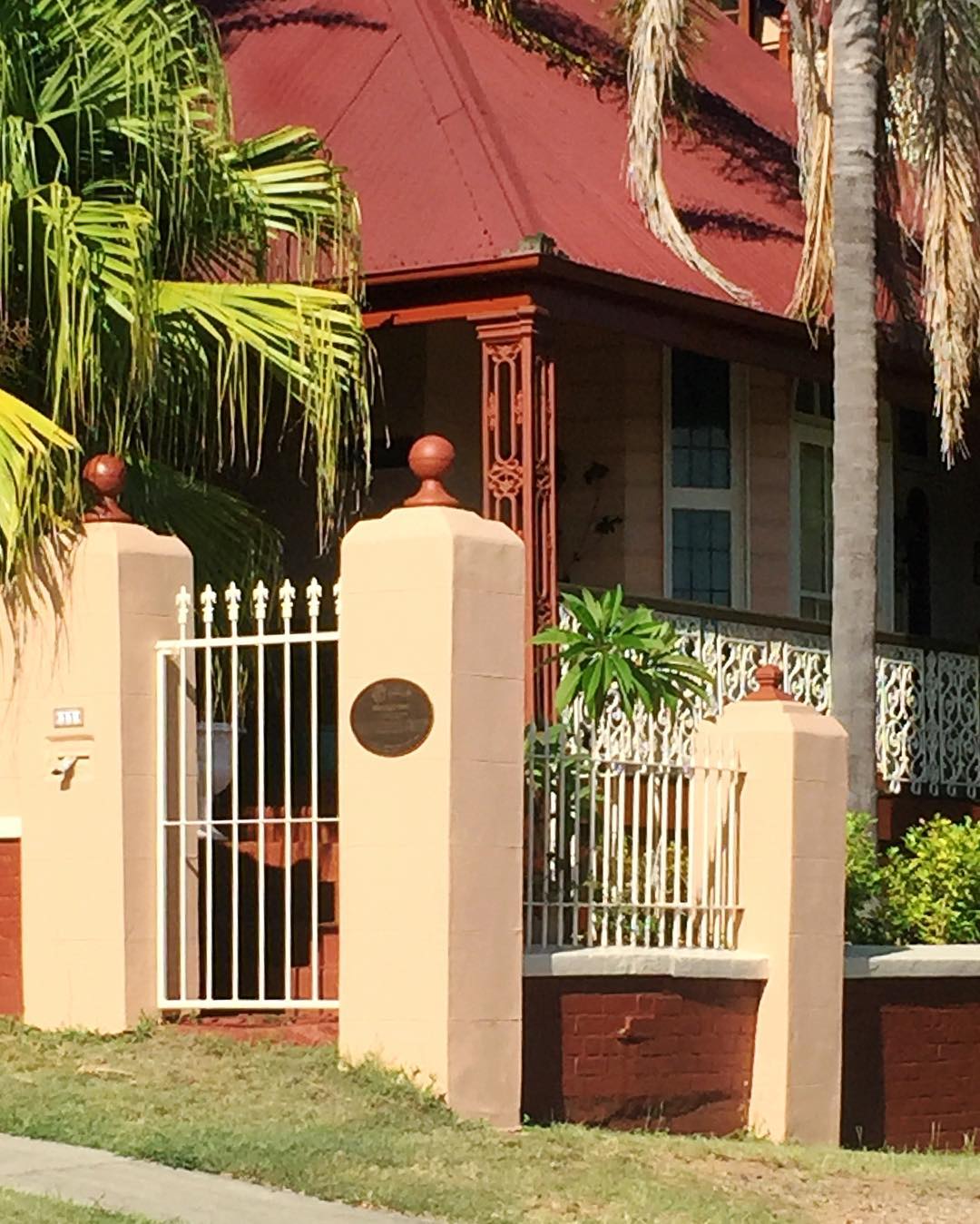 Bingo! Old lead flower flogs and vintage bingo cards. I have a thing for paper ephemera and find these frogs great for holding all sorts of things for a temporary/pop-up display.