I get asked all the time about how we created the hatch door in the floor in our last house when we renovated the kitchen. So I thought I’d write up an explanation on here to make my life and your life easier! Before I start though, I have no idea if this solution is to code. So where ever you live, if you want to try this you may want to check with an inspector first.

I cannot express the magnitude of how genius of an idea it was to take out part of the wall that sectioned off the basement stairs, and have a hatch door created. I have talked about this in previous posts, but OMG it turned out so swimmingly that I had to dedicate a post to it. This is such a great idea for folks out there who have really limited space, as I do. This house is 12′ 2″ wide – so that is the width of the kitchen, and the section where the wall to the basement was made that about 9.5′ wide. Let me show you some before photos. Now, this decision was made partway through the demolition phase so I did not specifically take before photos of the area. Below are some I happened to have already (and one I snuck during demo when I was deciding what to do). 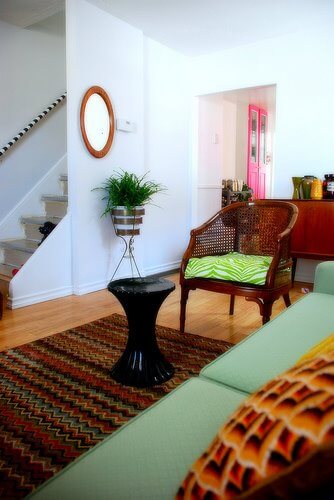 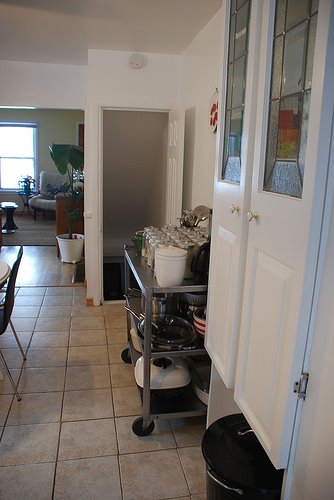 Leaving that wall meant the pantry unit would have had to have been placed closer to the door to my office and with the fridge there, that would have made the doorway very tight. Then with the dining table down the middle of the space, you would have had to shimmy sideways to get by the table, or I would have had to use a small 4 person table instead. Here are a couple photos I took during the reno. 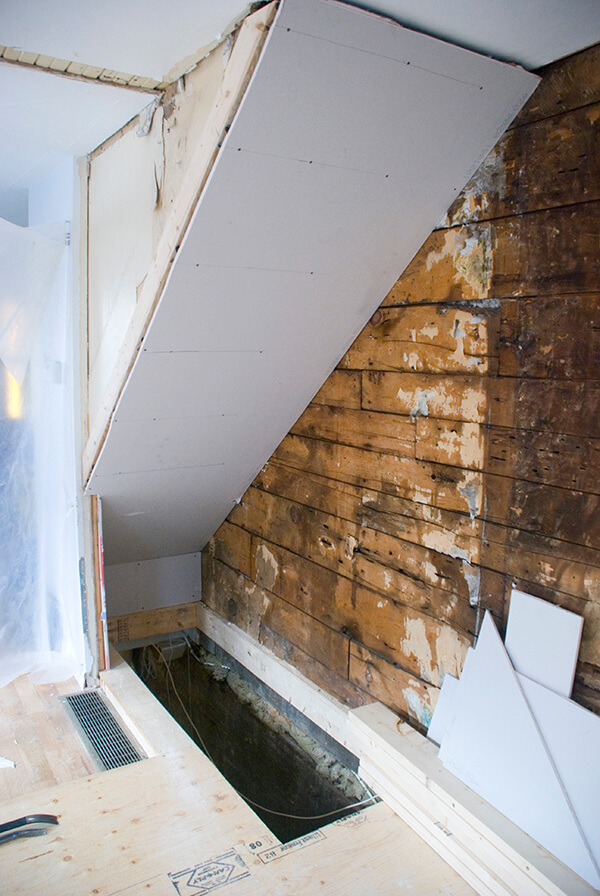 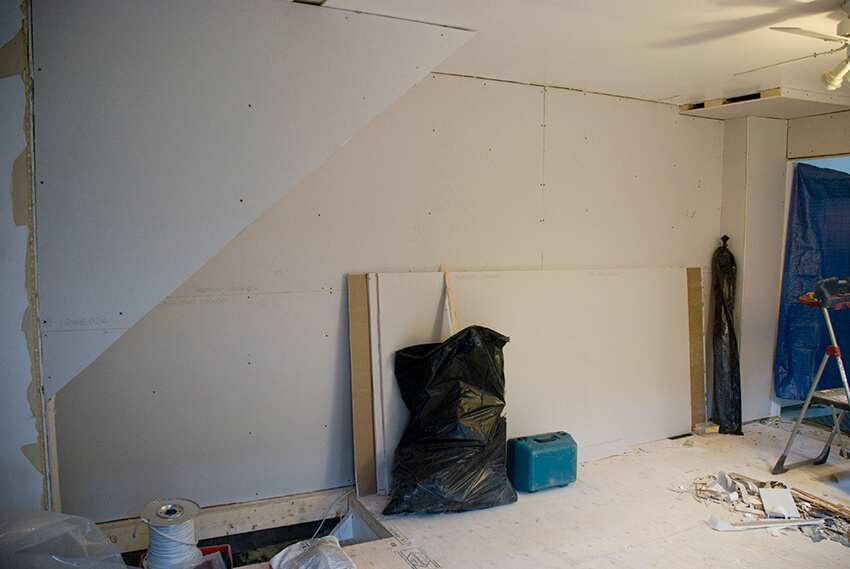 Below, my completed hatch. Genius I tell you – GENIUS!! Worth every penny. And I love that my house, that was previously lacking any architectural feature WHATSOEVER, now has something slightly quirky, and isn’t just a straight boring wall. Of course the hole in the hatch is so the cats can get down there and use the litter boxes. 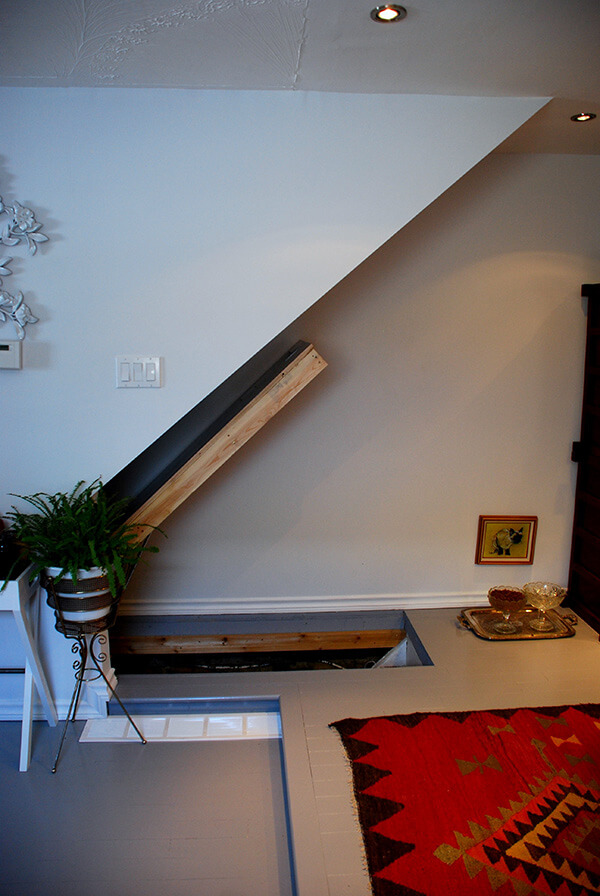 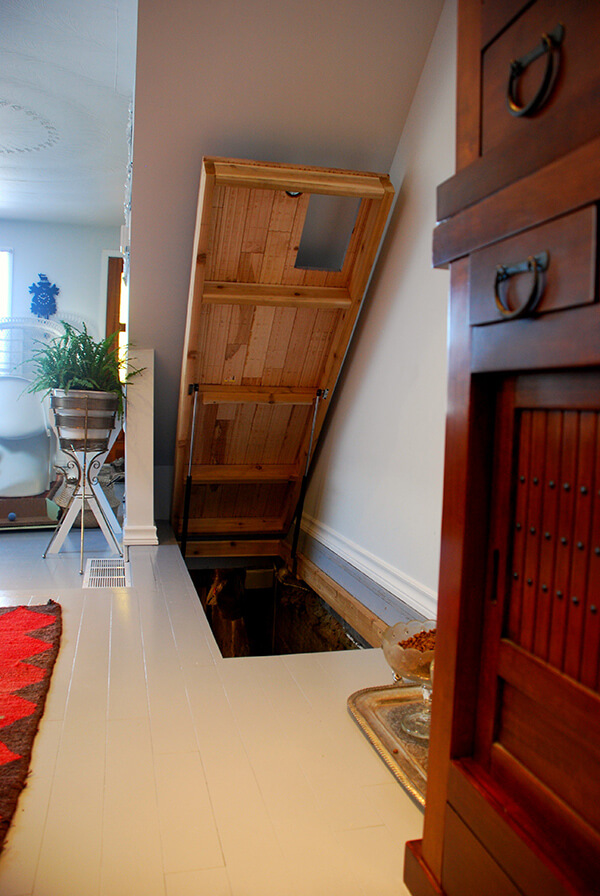 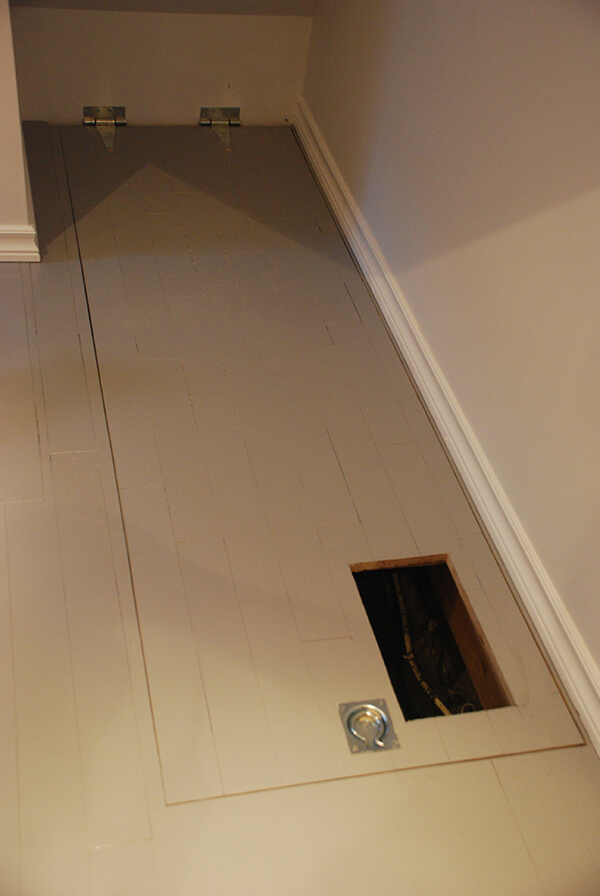 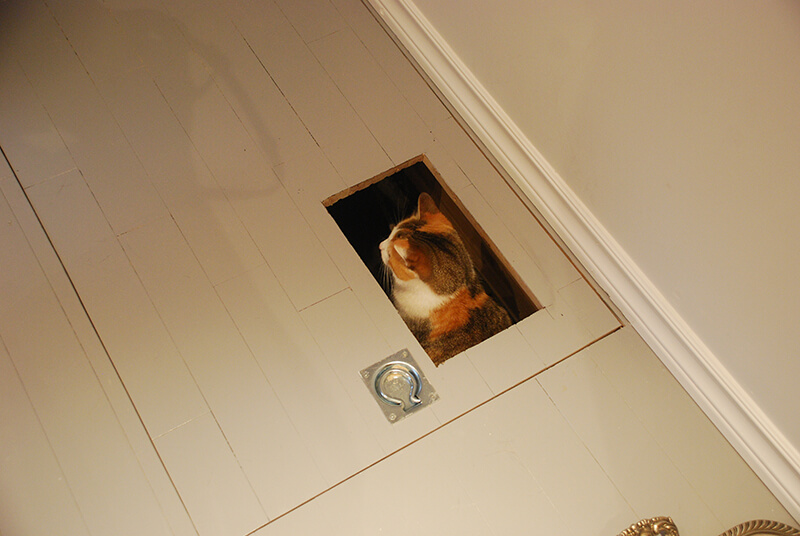 We used shocks for the tonneau cover of a pickup truck. They were $50 a piece, but they are exactly what I wanted. It allows the door to almost spring open and closed (I keep a grasp on it so it doesn’t do it too quickly) and this also means I don’t need a latch like we initially thought. It just needs a little tug to open and slight pressure to close tightly. FABULOUS!! 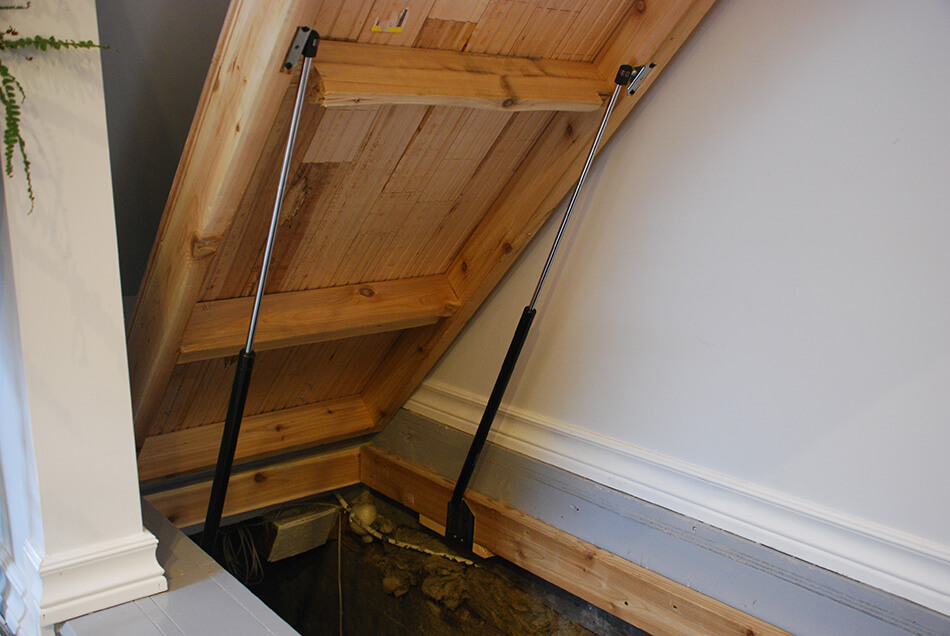 Here are some (terrible) photos taken by husband of the details of the shocks we used: 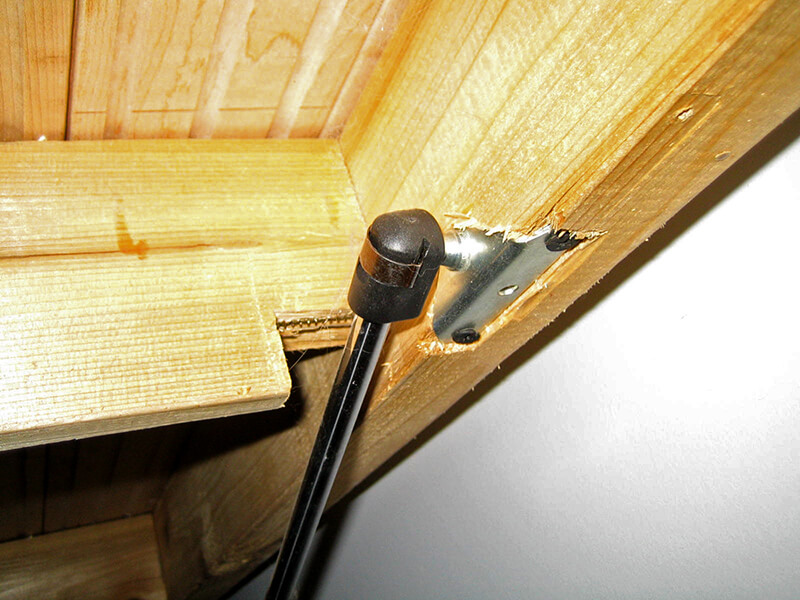 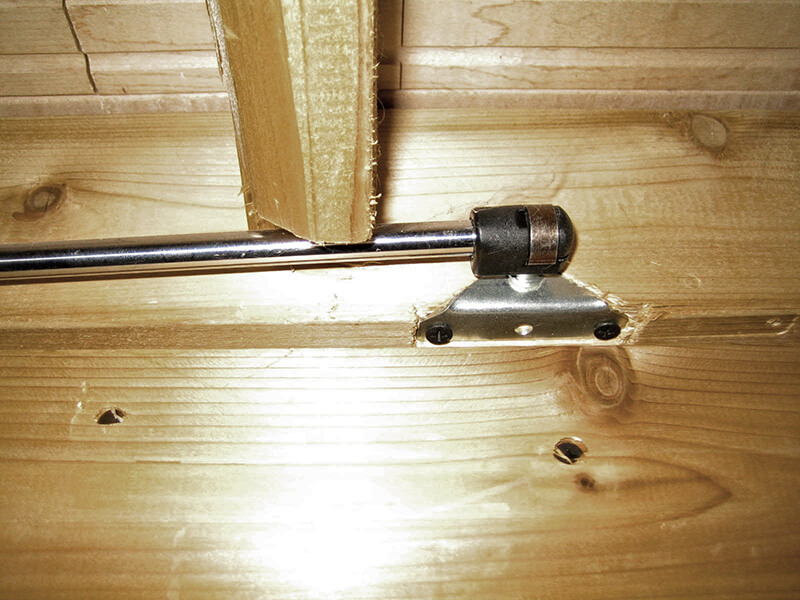 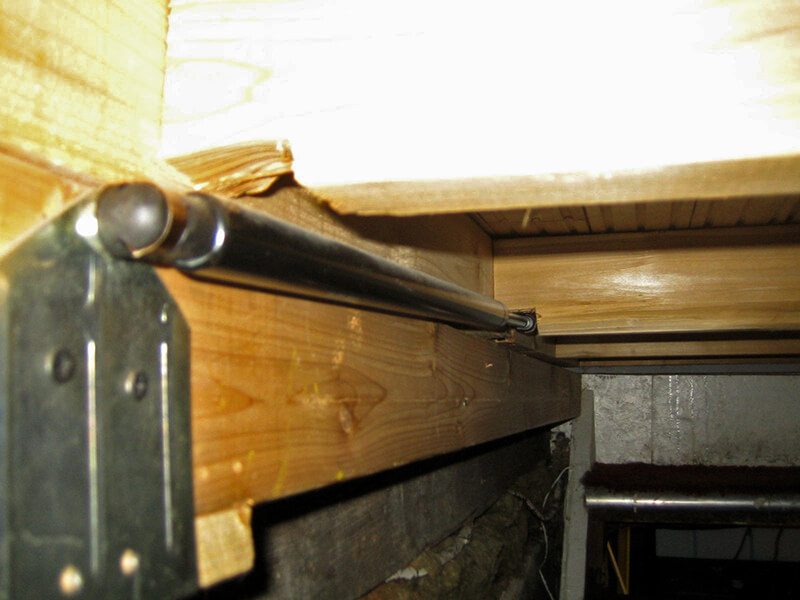 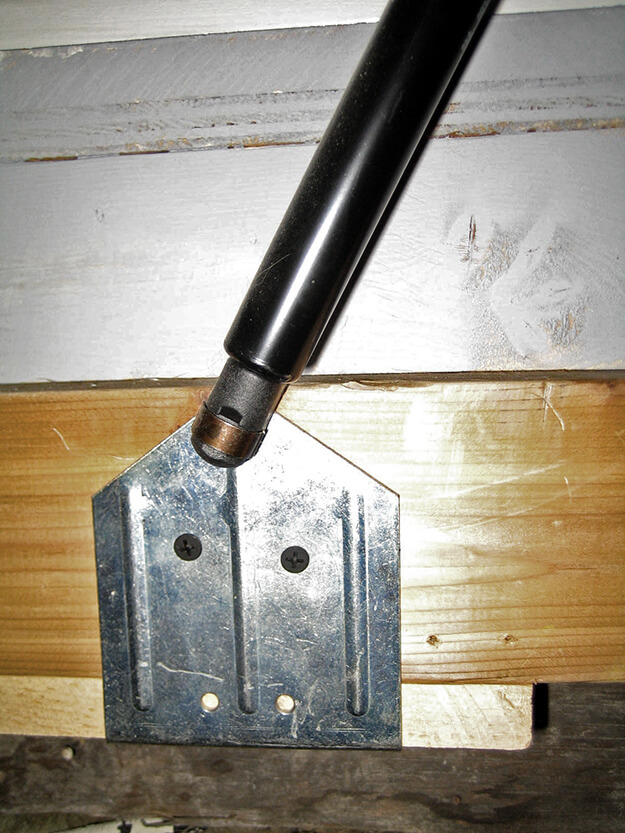 And some details from my husband on the shocks and hinges:

We used tonneau cover (cover of the bed of a pick-up truck) shocks. I don’t know how long they are, but I would say fully extended they are about 36″. I went by weight at the auto parts store, and by the look of the brackets that came with the shocks. The contractor told me the hatch weighed about 50 lbs. The shocks I got will hold 60 LBs each, so I knew they would work. What I looked for is the L shaped brackets on the end of the shocks. Each end of the shock has an L bracket that I could attach to the floor and to the hatch. I chiseled out the wood so the brackets fit flush. I also had to carve out part of the hatch so the shocks wouldn’t hit the wood when it was closed. I fit the shocks while the hatch was fully open. Here is the place I bought the shocks from – http://www.actiontrucks.com/. We used a piano hinge at the back of the hatch. I would like to change that to something else (car hood hinges maybe) because the piano hinge is somewhat unstable. It is OK for now though as the shocks are quite heavy duty.
The shocks are mounted in the middle of the hatch and then 16″ in from the end of the opening on the floor. I didn’t take measurements, but did tests to see where I could mount the shock so it could be fully extended, would full close tight and still hold the hatch up when open.

Haha this product is using your photo in their amazon listing.
https://www.amazon.com/Support-Replacement-Undercover-Application-Vepagoo/dp/B08FJ1T4QC/

Is the finished door strong enough that you can walk on it, or better, place a few chairs on it (or maybe even a couple people on a ladder)? I want to do something just like this in my house, but it needs to be strong enough to take quite a bit of weight because it’s in a workshop.

If you brace the opening well enough sure. Our hatch was strong enough to walk on (though clearly not really required)

This is amazing!! We have a similar situation and I’d love to do this, but our stairs curve at the bottom so the back of the staircase is not quite so flat and bulges out, which doesn’t leave room for a hatch at the moment. Maybe one day I can get it all redone (without my other half noticing..).

What are the dimensions of your hatch/hole? And if it’s not too much to ask, the height/length of your basement staircase? Do you have to crouch at all to avoid hitting your head?

Thanks! Sorry I don’t have dimensions. We sold that house several years ago. And I don’t recall having to crouch as the angle of the hatch when open was high enough.

[…] floor door is so well placed, that I bet even the best set of eyes wouldn’t notice it. Floor doors can be […]

Hi, I am hoping to do something like this myself, but, I’m not sure the Building Codes will allow for a stair to a basement under a floor hatch. Any idea if this presents Code issues? I realize Codes can vary depending on where you are..

We have a heavy basement door hatch that we are looking to replace with an easier lighter way to open. This idea is genius. We’d need to hire so would you suggest a carpenter?