If you love dark spaces then you will remember Pati‘s home (a rental) that I featured back in March. She recently renovated her very small kitchen and as always, it is DYNAMITE and I begged her to send me photos so I could share it on the blog. She sent along a bit of info as well: Since we moved in we hated our kitchen – it was was rather dated and I had updated it with black tiles and lino flooring 10 years ago as cream tiles and green lino did not go, but I didn’t want to do anything to the doors without getting permission first. There were a few options I could try with the existing doors which I will explain in details later (for those of you who do not want to change the doors) but in the end I opted for changing the style of the doors. 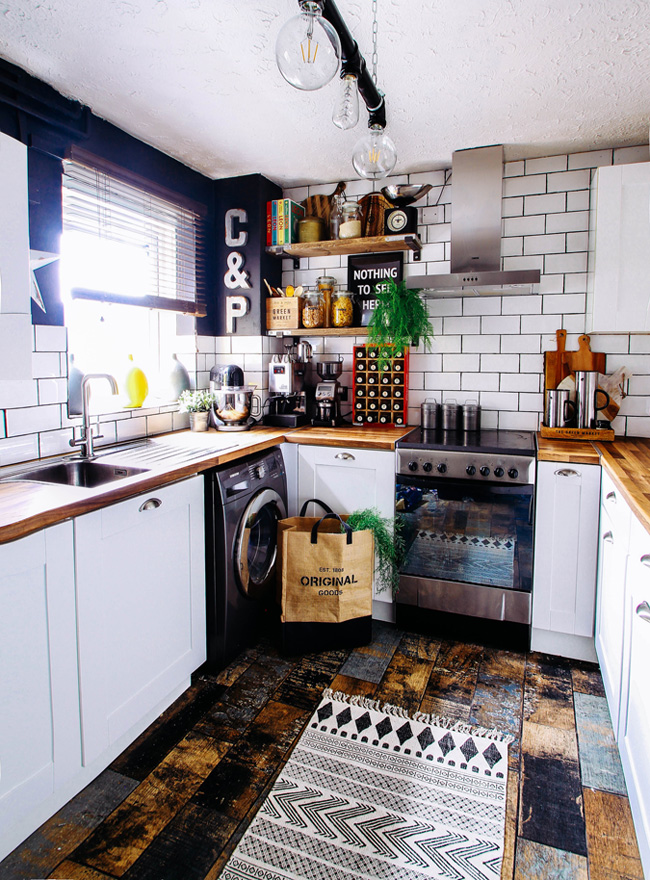 Finding a bargain takes some time – so I started my search last year in order to purchase items that I wanted to change at the best price available. I then watched a few tutorials on how to do certain things and decided to do all the work myself to save money and allow me to “have a kitchen earlier” – if you are handy with a drill then there is nothing stopping you – you just have to have a little faith in yourself. (For those wondering why my husband didn’t do it for me – my husband is disabled so all DIY around the house falls on me). All in all after selling worktops and doors off I have spent £650 for the whole lot! (tiles and doors included in the total) 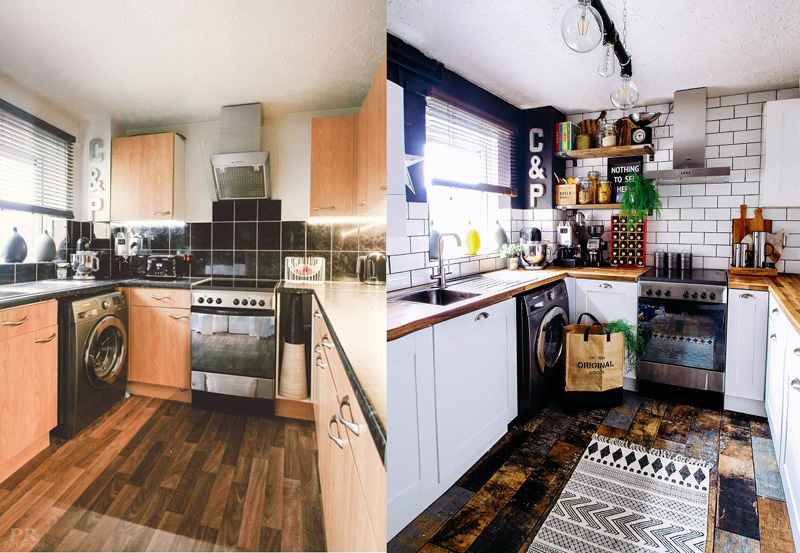 Thinking it was a good idea at the time and would be relatively mess free (I forgot that we didn’t have doors i could close to stop all the dust settling in the rest of the house)…well let me tell you one thing. Dust was everywhere and a small job turned into a major disaster. When removing old tiles from plasterboard I managed to rip half of the wall with the tiles (must have been a good adhesive!) – fixing the wall wasn’t as difficult as I expected it to be (besides the fact that I ran out of screws half way through – planning isnt my strong point ;)). 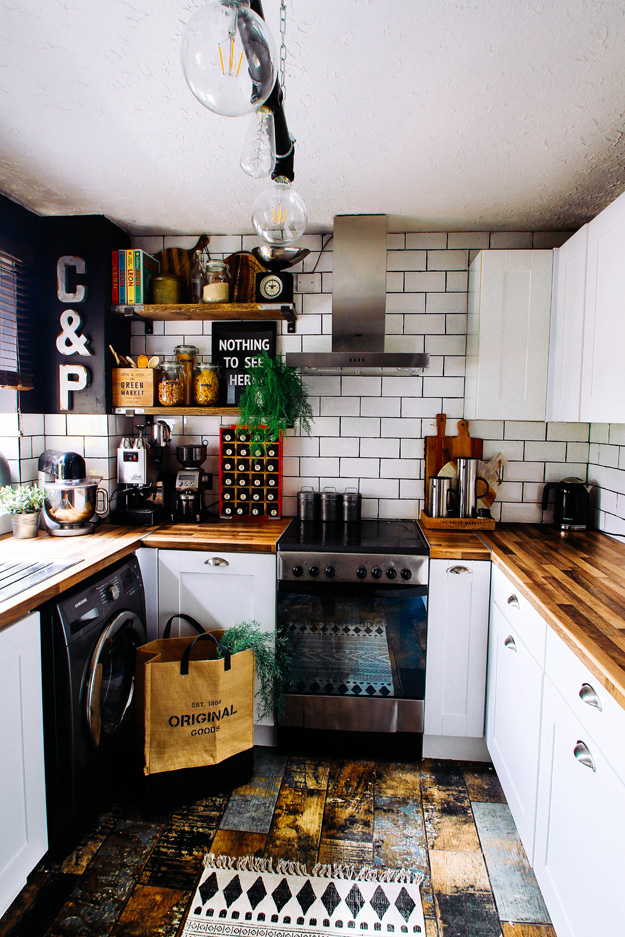 To keep within my rather small budget I started my search for cheap, reduced or free materials last year. Wall tiles were free because U.K. supermarket Tesco had an offer where I could triple my points I collected onto tile vouchers. I “bought” them last year, worktops were bought a few months later, and the rest were slowly bought whenever I saw something on offer. Storing everything was a bit of a pain in the backside as our home is so small there isn’t much space so all tiles were under sofas, tools and tile adhesive under the bed and worktops in the living room waiting for someone to trip over them. 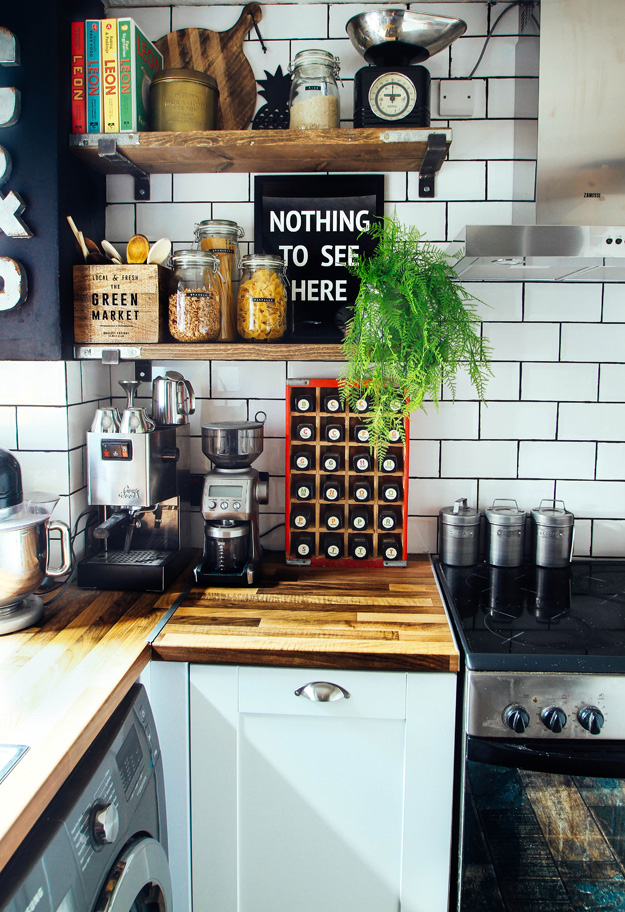 Traditional Shaker style kitchen was always a small dream of mine and since my doors were the wrong style rather than painting them (which I would have loved to do) I opted to replace them. Changing doors was a much cheaper option than replacing a whole unit as all my cabinet carcasses were in pretty good condition. Besides replacing 2 cabinets with one long one and removing one wall unit in order to fit the open shelving, having a door made to measure also allowed me to add a door to a extra narrow space by the cooker – that part (as it’s not a unit) was made I think by the people who fitted the kitchen originally as it was too narrow for any narrow door. What helped in this one woman job was watching how-to videos and not being afraid to give it a go. It is far from perfect by any means but at least we have a usable kitchen that we all love. AND I FREAKING LOVE IT TOO!!! 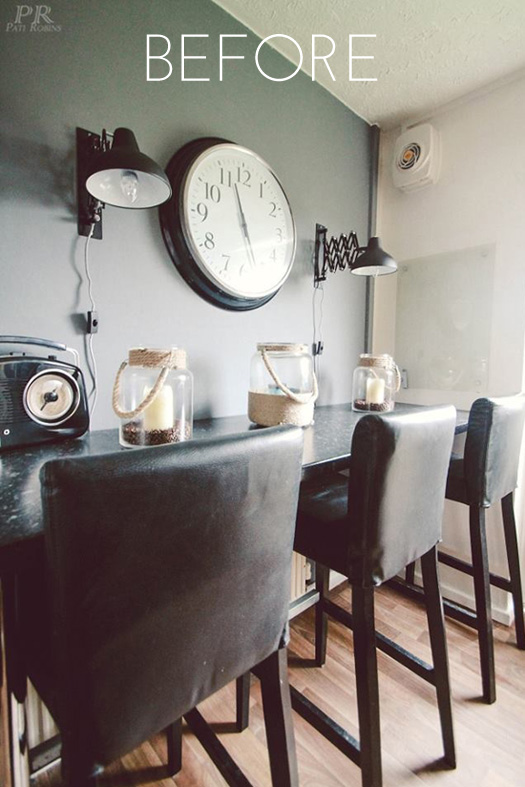 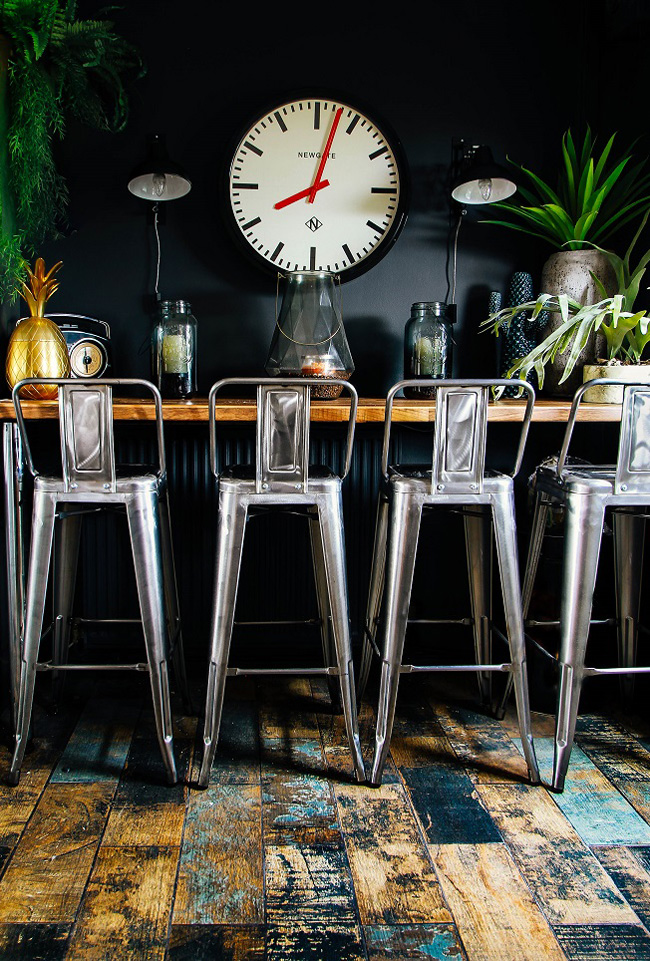 f***ing spectacular. pati you are amazing.

I must say I see nothing wrong with the before picture. Both kitchens are very nice.

w o w ! what a fantastic remodel; and the inspired thriftiness is so impressive (i am not thrifty). thanks for sharing this great project!

Absolutely stunning. And I LOVE that you did it yourself and were so considered in what and how you purchased things for it. The dark paint is a winner. Just wish I could see it in the flesh. Thanks so much for sharing. Truly inspiring!.