If you’d like to send us photos to include in next week’s “pets on furniture” post, please ensure your photos follow our basic rules: First, the pet must be on a piece of furniture. And said piece of furniture must be clearly visible in the photo, so it takes center stage rather than your pet. (Think of it more of a photo of a great piece of furniture…and your pet happens to be sitting on it). And second, the photo must be of decent quality. If it’s REALLY dark or fuzzy (from a camera phone) then it may not make the cut. Thanks! (Photos can be sent to desiretoinspirekim[@]hotmail[.]com and PLEASE don’t send me closeups of your pet!!!)

“Here’s a picture of my bulldog magoo.”
– Andrew 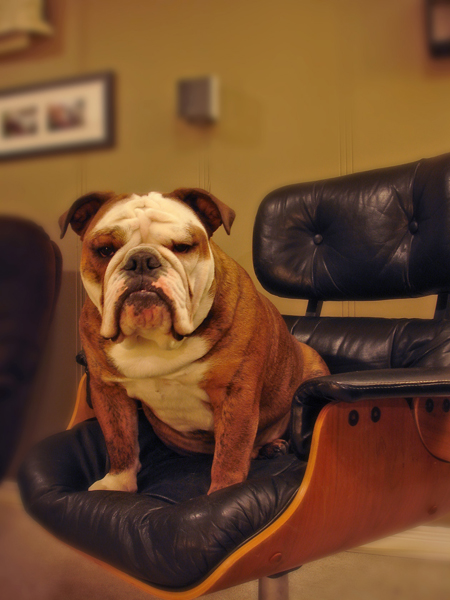 “This is my Birman, Charlie-Anne. I was actually trying to take a ‘before’ picture of this sewing bench, since I was about to reupholster and refinish it. But Charlie just assumed I had my camera out to snap some glamour shots of her, so she hopped up on the bench and struck a pose.”
– Cathy 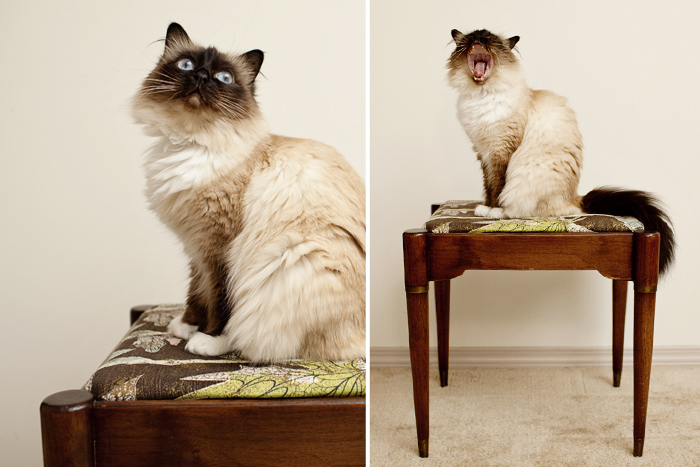 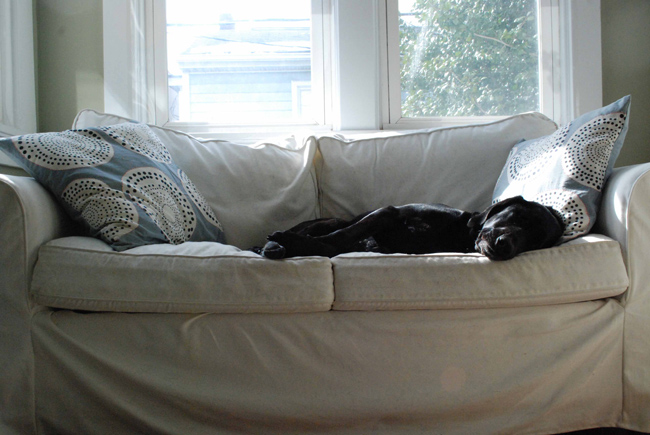 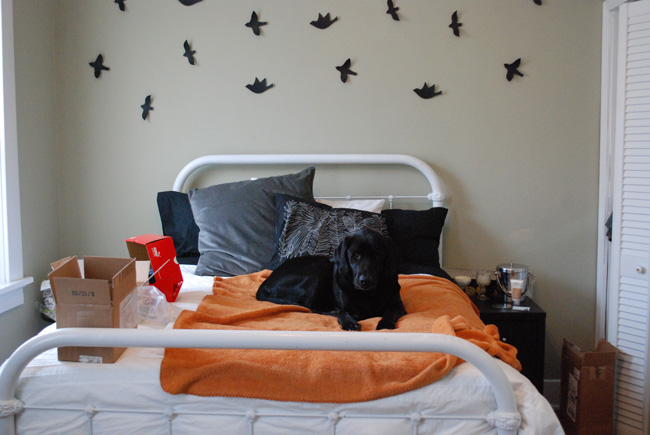 “A friend of mine sent me your site, and I have the great photo of my 120 lb. Weimaraner, Murphy, curled up on my grandmother’s chair. I couldn’t resist. It’s my favorite chair and his, which means we have it out sometimes to decide who gets it. He usually wins. Most mornings, he’ll sit on it (like a normal person, of course) and look out the window at all the commotion on the street. If he’s not on the chair, he’s either laying by our little space heater or trying to sit on someone’s lap. Yes. He also thinks he’s a lapdog. But that just makes us all love him even more!”
– Sarah Brown

“These are my two dogs, Ringo ( rat terrier) and Bonnie ( Pembroke Corgi). There are two chairs. They belonged to my husband’s grandmother and I love the fabric.”
– Jessica 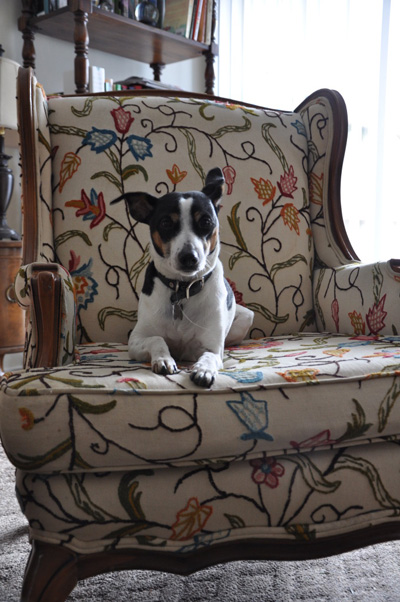 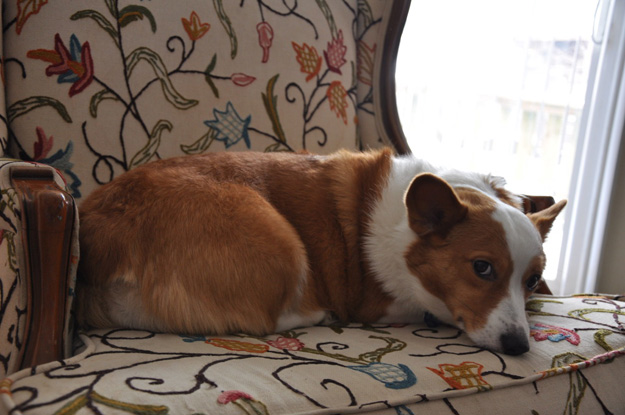 “I thought I’d send a couple pictures of our dogs on the couches (even though they technically aren’t allowed on the furniture!) for your pets on furniture posts. The first is of our dear Oliver. One night I couldn’t find him and after searching everywhere I found him fast asleep on the couch in the living room. (In the dark he looked like another pillow). The second is of both our dogs, Oliver and Roxy, enjoying the late morning sun. You can even see our bearded dragon, Aladar, in this photo!”
– Nicole 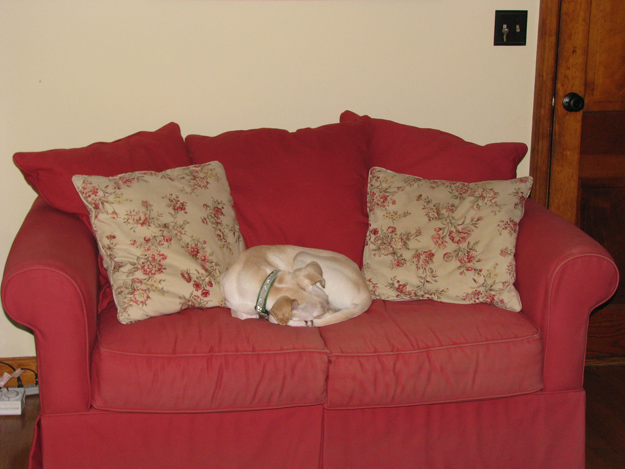 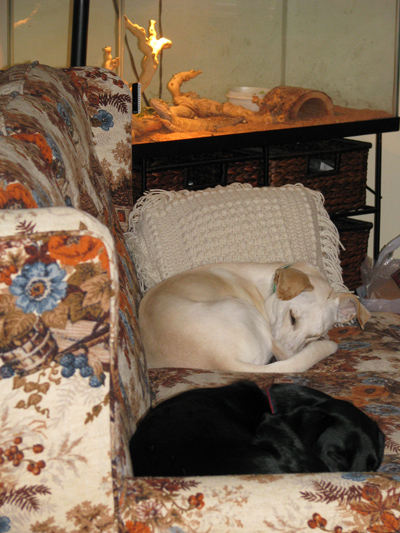 “Here is a picture of my Maltese X, Oscar, in his favourite spot. Hope you can include it in your post. The throw rug on the couch is a necessity, as cream couches and dogs aren’t a great mix! And here’s my cat, George, on the same couch. Apologies – it’s a bit too close and doesn’t show as much of the couch, but I love the way he’s tried to tuck himself under the throw!”
– Melinda 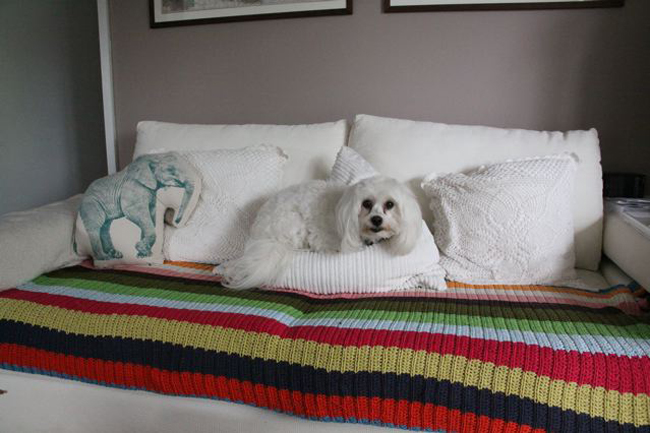 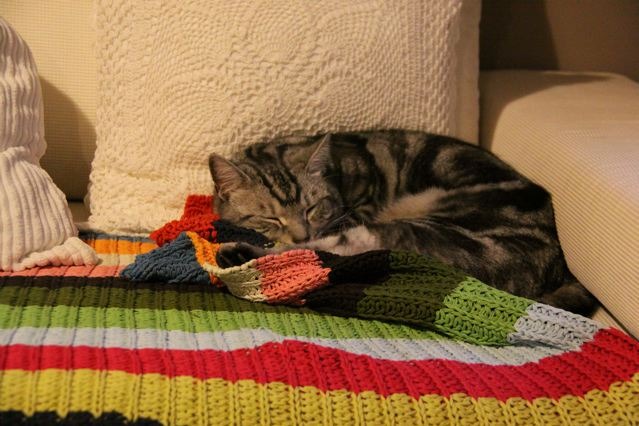 “Here are a couple shots of my cat, Ivey. I recently rescued her from a barn (a coyote had eaten some of her companions!), and prior to about three months ago, she had never spent a day indoors. As you can see, she’s adjusting just fine! The first shot showcases her larger-than-life ears, although the rest of her is getting larger, too, thanks to the amount of time she spends lounging on “her” bed. In the second shot, she shows off her inventive way of sitting on the couch. Not exactly demure, is she?”
– Sara 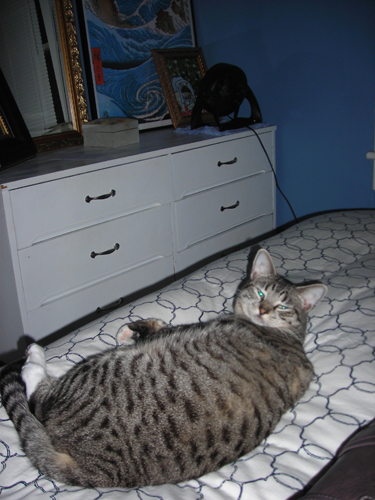 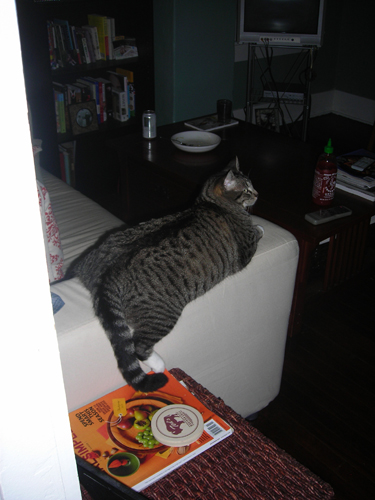 “I am sending you a photo of my very photogenic and value neutral cat Keats who I am sure would love to do a proper sit-down pose in his favorite IKEA Tullsta chair, if he could bring himself to actually stop and sit down for one second! Alas, there is too much exploring that needs to be done, and he rushes on…”
– Yelena 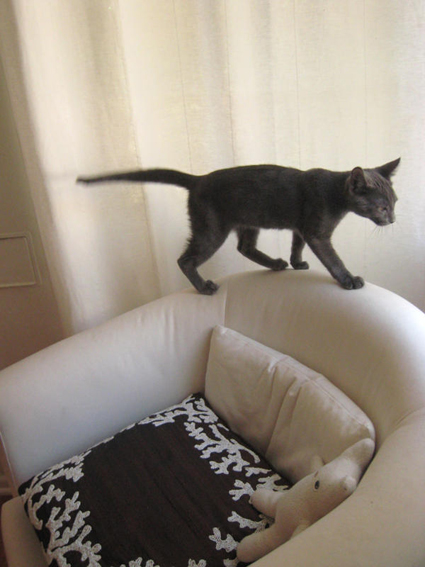 “One of the great mysteries of cats: Why do they lay on hard surfaces when there are so many cozier spots in the house? Here’s Sadie on our farm table. I like the second shot better, but she has the glowing eyes in that one.”
– Leanne 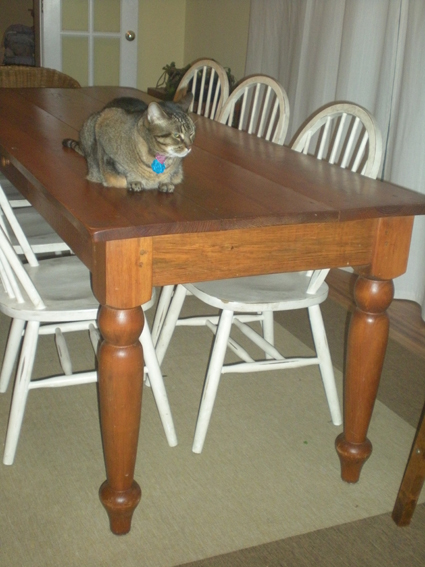 “During our recent spate of massive snowstorms, my cats Coco and Tommy kept warm by cuddling on the couch.  And yes, the reason for that imperfectly-fitting slipcover is because of how much they scratched the original couch!  Oh the sacrifices we make for these animals…”
– Katie 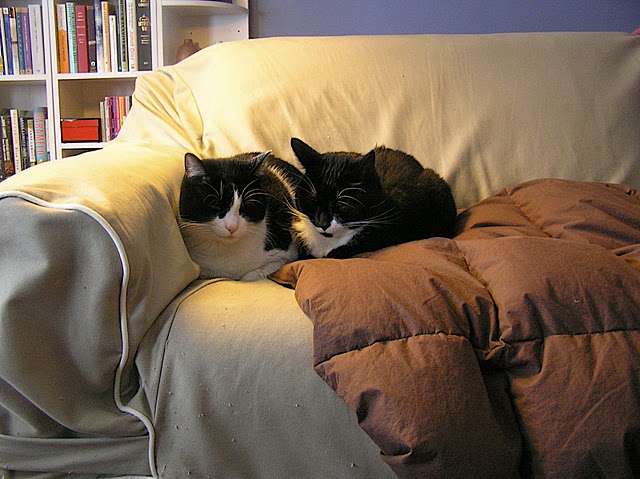 “Attached is a photo of my cat, named Mouse. She’s a former stray who I adopted last April when she was just a fur, bones and a skinny gray tail. Since she’s not allowed at my table, Mouse has figured out she can both watch me eat and beg silently by sitting patiently at my desk. Her tactic seems to work – maybe because her eyes match my dad’s old childhood desk so perfectly.”
– Julia 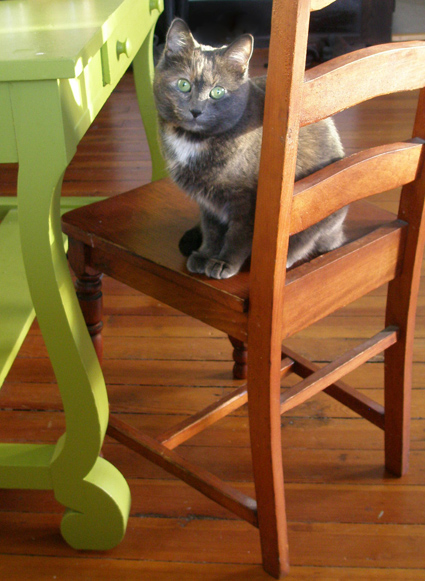 I was at the Westminster Dog Show in NYC today. Still, I had to come home to look at pets on furniture! So cute!

Today’s pets on furniture posts are some of my absolute favorites ever!!! XOXO!

The pets are really cute but you can hardly see the furniture, or a furniture of any significance in some of these pictures, no?

awww magoo! i love him. and, i love love love this series of posts, they really do make my day! hope you have a great week my dear!

First, the pic of the wiemaraner is so awesome, it looks like a painting…beautiful!
And secondly that one cat is so dang fat it looks painful!

magoo needs to be in pictures!!!

I’m not sure about all of these Monday morning pets on furniture! I love my dog but I love this blog more for all the great homes! Any chance you could weed down the number of pets, or do that in another blog…I just really love all the other stuff! (And it’s a lot to scroll past at the moment!)

Love the Charlie-Anne cat photos! How did she get the cat to open its mouth and get the perfect photo? Wonder if she will pose for the ‘after’ pics?