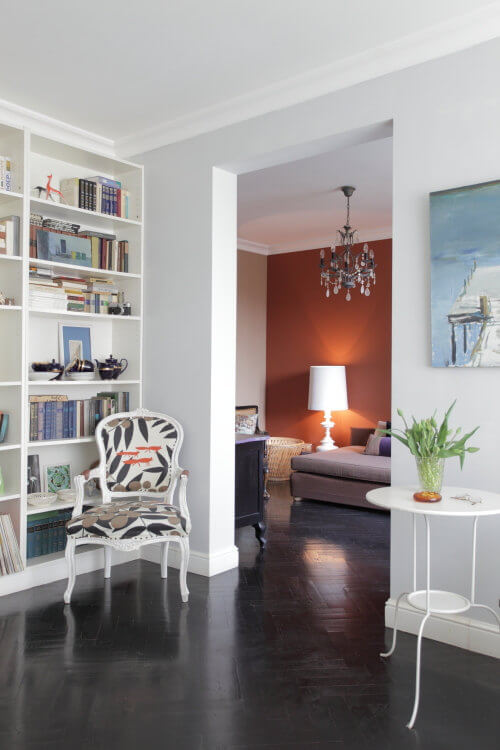 After yesterday’s amazing renovation I thought I’d share another. This time though it’s teeny tiny and on a shoe string budget. Alexey emailed to share this soviet era apartment re-do by interior decorator Natalja Radchenko in the Latvian capital of Riga.

The apartment belongs to a middle aged Russian literature teacher who has inherited it from his parents and who had quite an utopian idea to transform a one bedroom 40 sq m living space located in a depressing soviet project building into something at least slightly resembling Riga old town last century apartments with high ceilings and wooden floors. Her main goals were to create (an illusion) of space and not to lose apartment’s functionality. 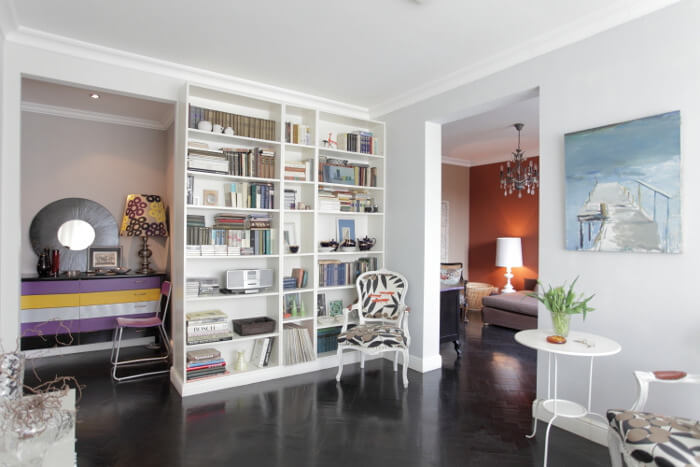 – Eliminated all the doors, leaving only one – to the bathroom;
– Created wide openings;
– Optically expanded space with wide cornices and plinths;
– Chose neutral tones for walls and black varnish for the floor.

– Dining room/space with kitchen work space;
– Living room, semi-integrated into bedroom (owner’s requirement);
– Small dark corridor transformed into wide hall leading to dining/kitchen, where wall is turned into a kind of gallery of owner’s family relics;
– Tiny wardrobe between bedroom and entrance hall.
In addition to small size, another obstacle was that the owner had a very limited budget. Hence, not a single piece of furniture is just bought (except for kitchen appliances and bathroom); almost every item is redone and redesigned. For example, a sofa in a living room is bought in a second hand furniture store (and was originally disgustingly pink), bed – on the closing hotel auction, dinner table is inherited from owner’s parents, and almost all of the lamps are found on furniture dumps. Visual appearance of every item was changed via being repainted, overlayed with another fabric, accessorized. It was not a classical restoration, rather an ironical one – e.g. chair in the hall is overlayed with canvas bag fabric.

First time visitors claim that the effect of entering the apartment from a dark claustrophobic staircase is probably similar to entering Narnia chronicles wardrobe – the contrast is astonishing. 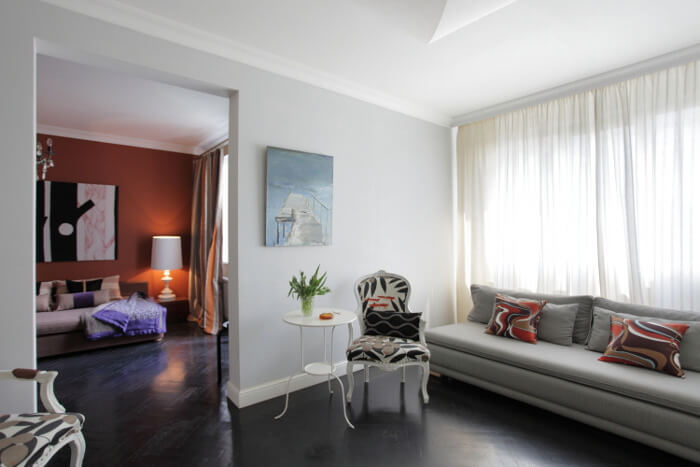 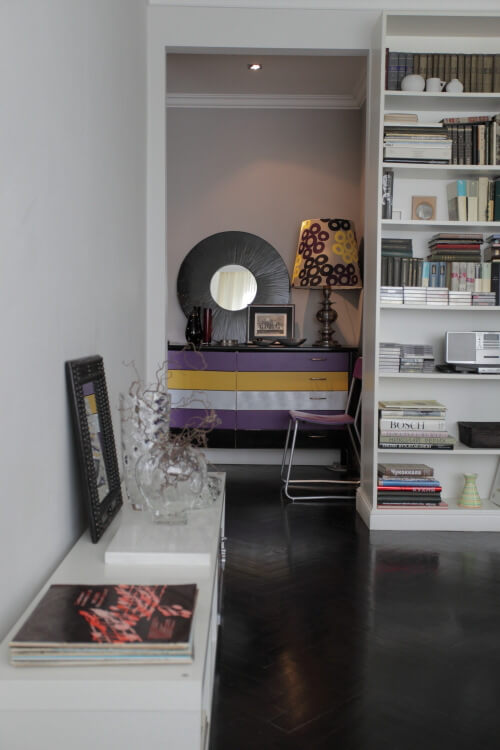 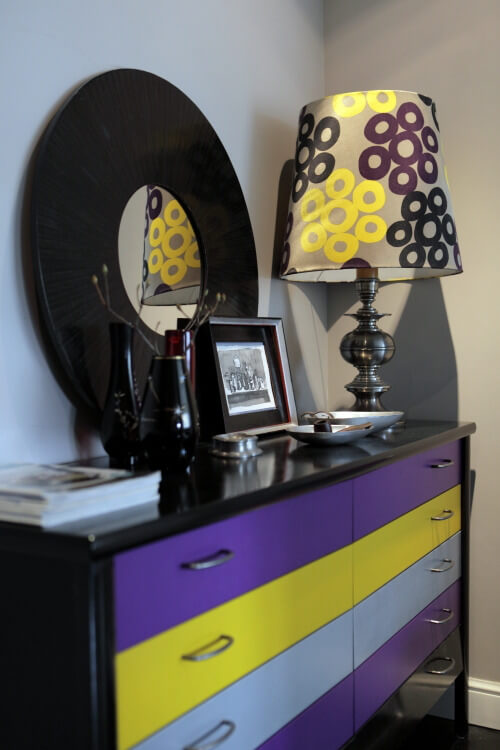 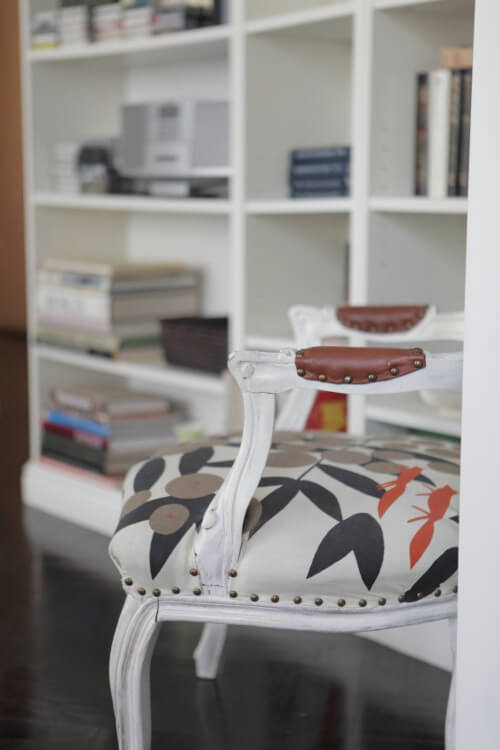 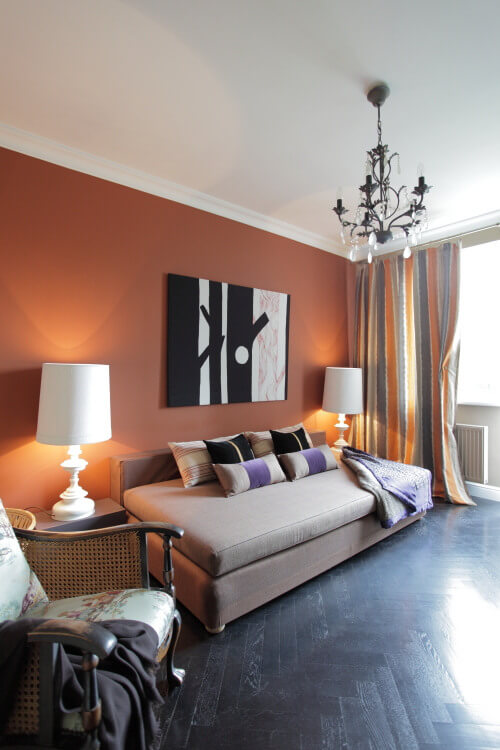 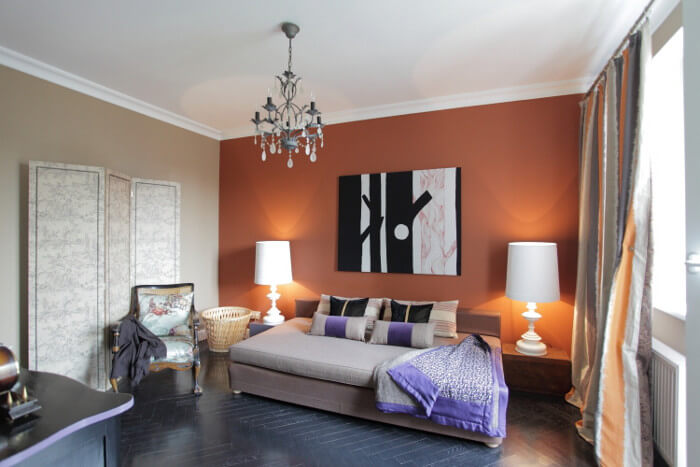 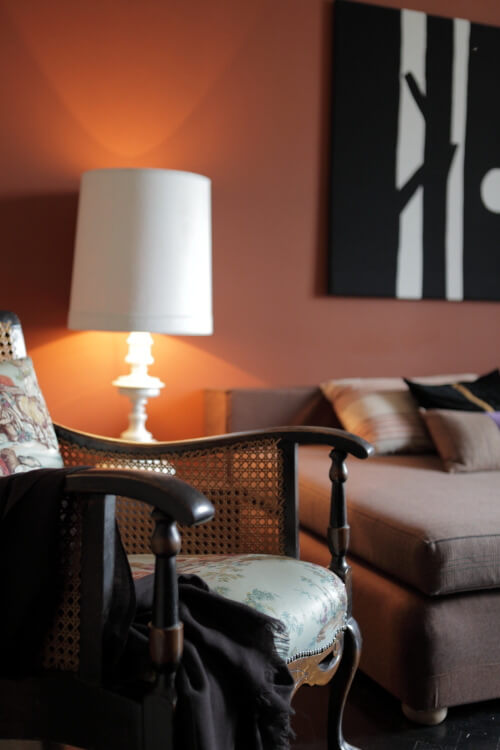 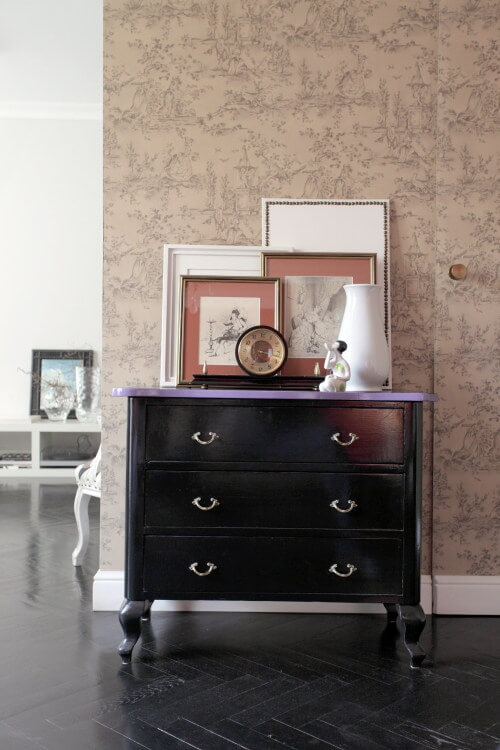 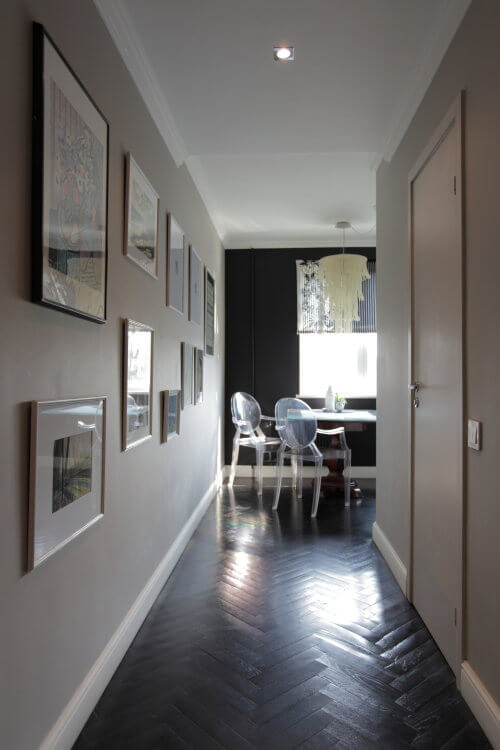 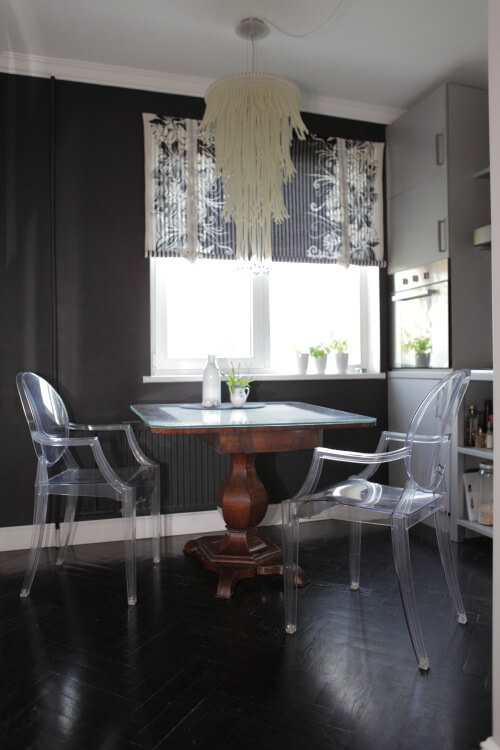 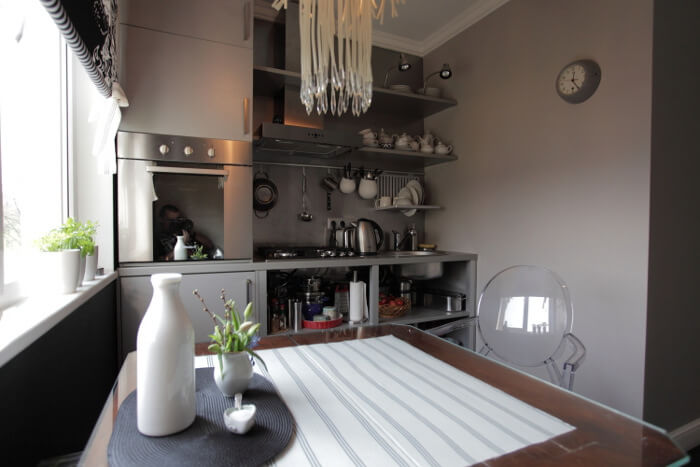 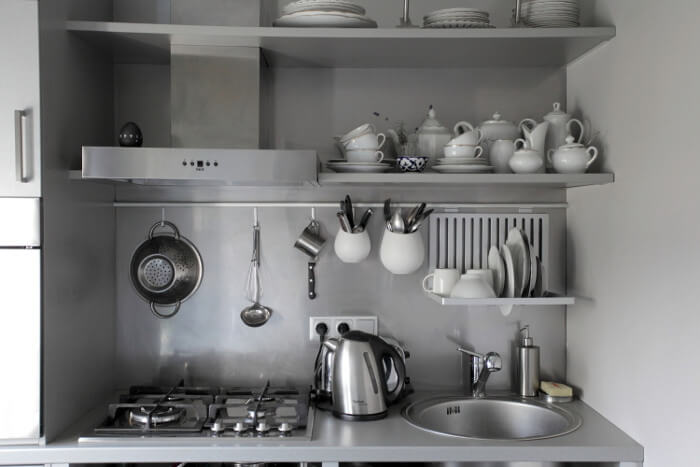 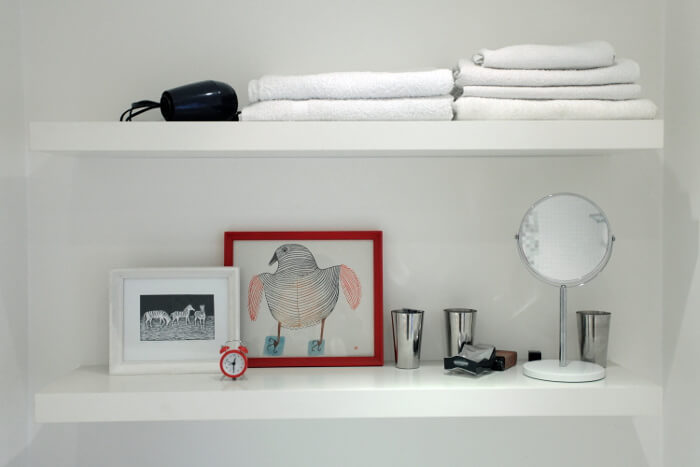 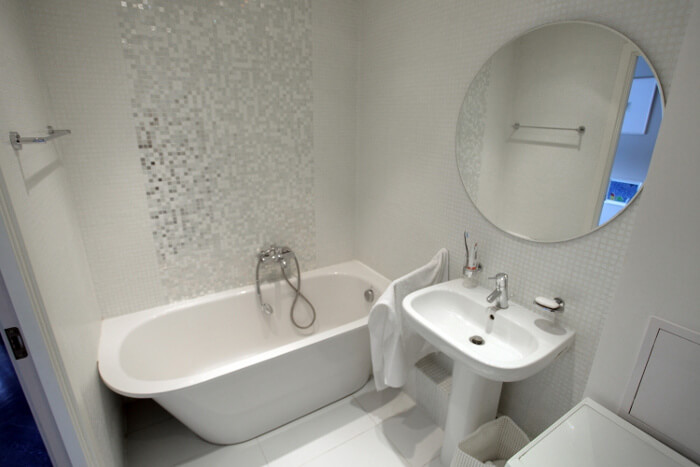 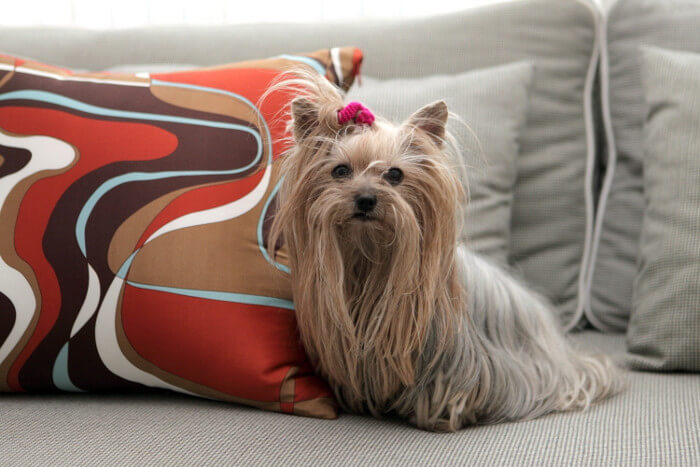 I don't know but when I hear of the word "project" I think of something wayyyyy worse and some place dangerous. And definitely not a place to invest all this $$ in either. I guess the Latvian projects are different? This place is gorgeous and looks way more upscale than the project building that comes to mind.

great color for an accent wall

My mother always told me that black floors were a "no no" because they would make the room feel smaller. Can't wait to send her this. Stunning…

Wow! What a great job. I love how it turned out.

Such a beautiful home. Love the colors.

Thanks so much for the links Go Bruins! I was really hoping for some exterior shots and am delighted that you could even provide a contrast for the interior shots.
Cheers,
Cate

this just went into my inspiration file.

Fabulous!!! What an inspiration for those of us on a minuscule budget and live in a tiny space. Thank you for this post.

I wish all Latvian middle aged teachers could afford not just apartment, but this kind apartment makeover.
Well done!

I love the upcycled furniture and the sleek doorless dividers. Plus, that pup sure is enjoying her stay!
David