Random on a Sunday

I spent yesterday at my sister’s cottage, enjoying what is likely the last decent weekend of the summer (although I did have jeans and a hoodie on for most of the day…this time of year is SO depressing). This means I did not have time to get a blog favourites post ready. Instead, I thought I would just keep this random with some items I have on hand.

First up, some photos I took Friday since I had the day off work and decided to spend a couple minutes rearranging some pieces in my living room. I LOVE this lamp that I bought at Homesense a while back and have had it crammed in a corner of my bedroom since it came home with me. I decided to move it next to the front door alongside my black Eames leather side chair, and switch out my Mexican tin mirror with my huge beaded rosary (also picked up in Mexico). Nothing too exciting but with no renovations on the horizon for this year I’m back to giving a sh*t what my house looks like. Because that Eames chair is a favourite of Felix, he has claimed the chair in the majority of these photos. 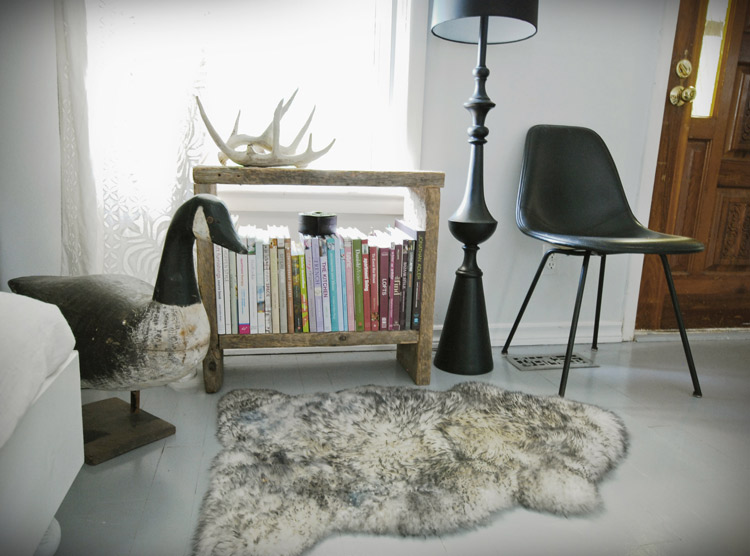 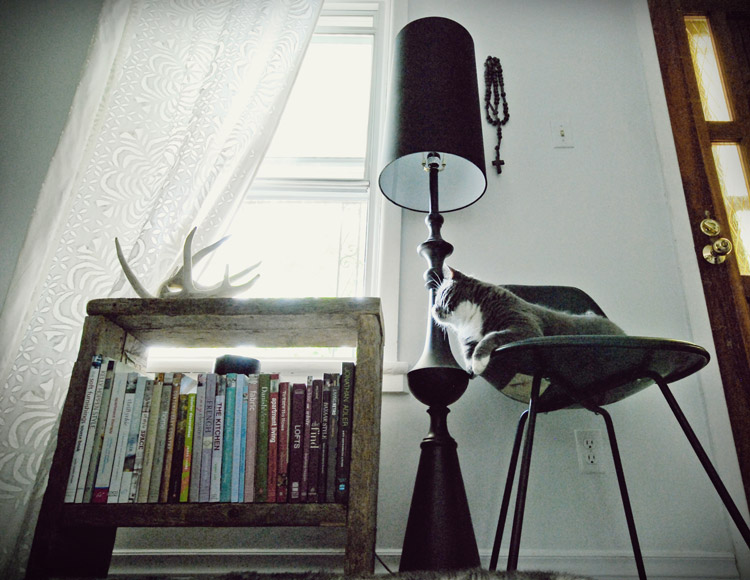 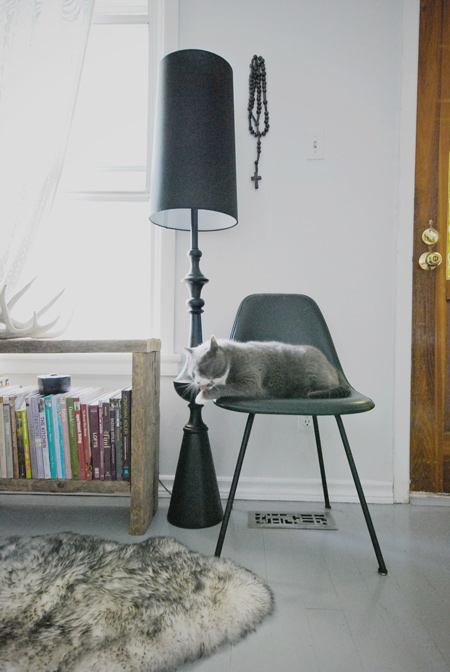 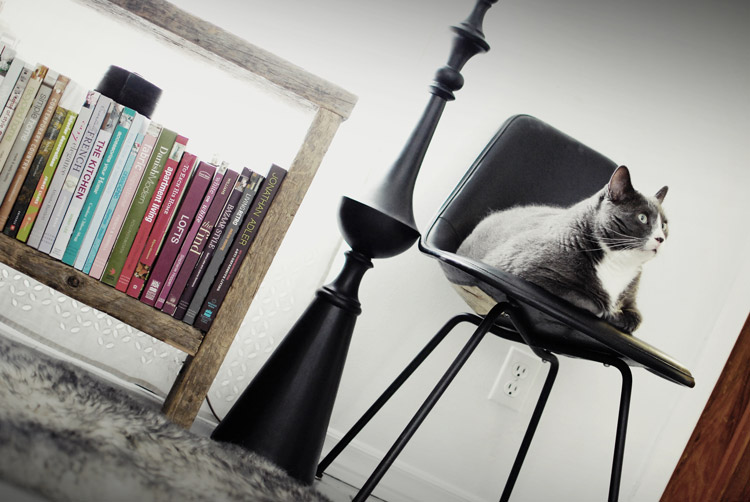 Despite the following action being out of focus, I thought it was hilarious that I managed to capture a little brawl. 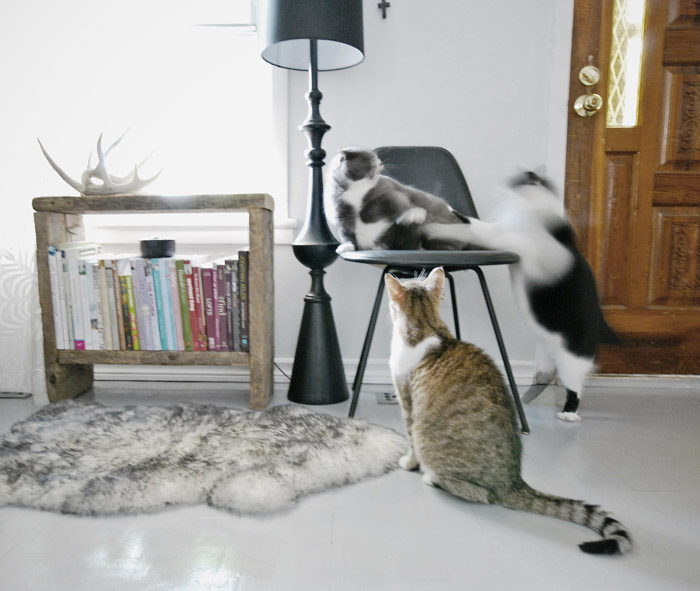 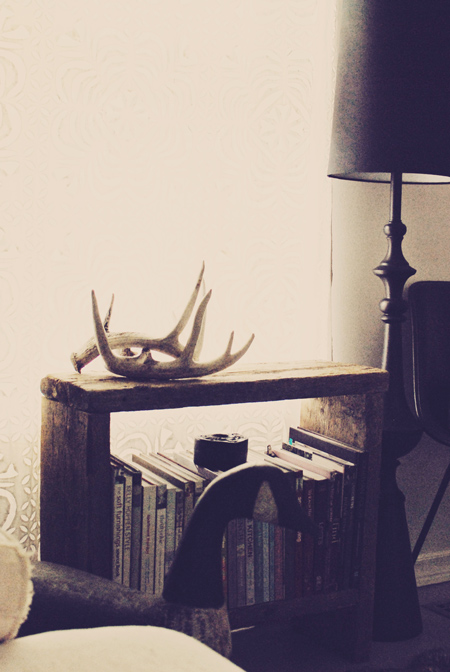 Remember Tom’s fabulous apartment that I blogged on Wednesday? Well, his apartment was filmed for a promotional video for his building and he just received a link to it on YouTube. Check it out!

One last quick item: Yesterday I came across the following photo of a kitchen that I found rather odd. I don’t think I’ve ever seen an island shaped like this before. I’m thinking a large rectangular (read ‘normal’) island would have made more sense… 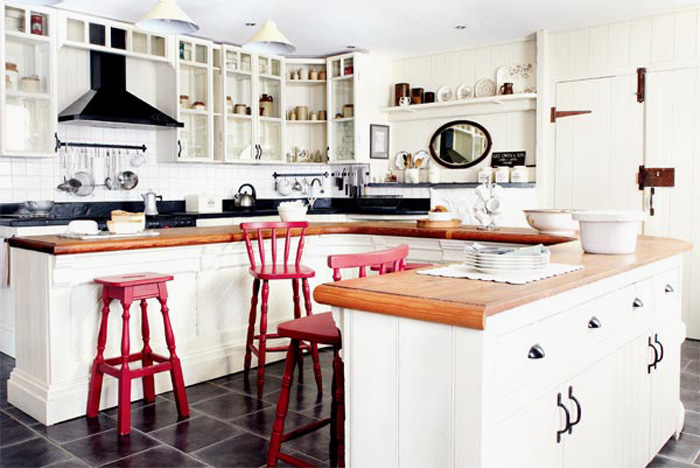 Do your cats fight over the furniture a lot?
Mine do. Jack is the only boy of 3 cats and he bullies his sisters out of comfortable chairs, etc. He stares my husband and I down to get us to move out of our faux-leopard wing back chair.
Who is the black and white cat trying to bully Felix out of his chair?
They are adorable!
Also, I really like the shape of the lamp base and the long narrow shade.

I agree, that kitchen island is wack. I appreciate that they were thinking outside the box, but it doesn't seem very practical. It reduces the counter space to thin strips, and did you notice that there is barely a lip along the inside (or the outside) for chairs to scoot under? Why on earth would you want to have chairs there facing the center like they are placed in the photograph? Doesn't make any sense at all. It is interesting though, the idea of having an island that isn't the typical rectangle. It just wasn't executed well here.

I love that you've posted photos of your personal space, thank you! I'm especially fond of that primitive bookshelf under the window. Your blog is one of my favorites, I really love your eye. Thanks again 🙂

just found your blog and i loooove it!!

Maybe they herd the kids in there at supper, then close them in for the night with a portable gate …

In picture 4, he is the epitome of a "cat loaf"! http://en.wiktionary.org/wiki/catloaf

Where did you find that Canada Goose?? I love it!

Lisa, the goose was a wedding gift from my inlaws (from P.E.I.). It's actually a decoy made by a famous carver and likely used by my husband's grandfather while hunting. I LOVE it and can't wait to find it a perfect spot once the house renos are completed.