Monday’s pets on furniture, and a tribute to Edgar

If you’d like to send me photos to include in next week’s “pets on furniture” post, please ensure your photos follow my basic rules: First, the pet must be on a piece of furniture. And said piece of furniture must be clearly visible in the photo, so it takes center stage rather than your pet. Think of it more of a photo of a great piece of furniture that you want to show off…and your pet happens to be sitting on it. And second, if the photo is dark or fuzzy then it may not make the cut. Photos, your name, location and a brief description can be sent to desiretoinspirekim@hotmail.comand PLEASE don’t send closeups of your pet! Thanks! 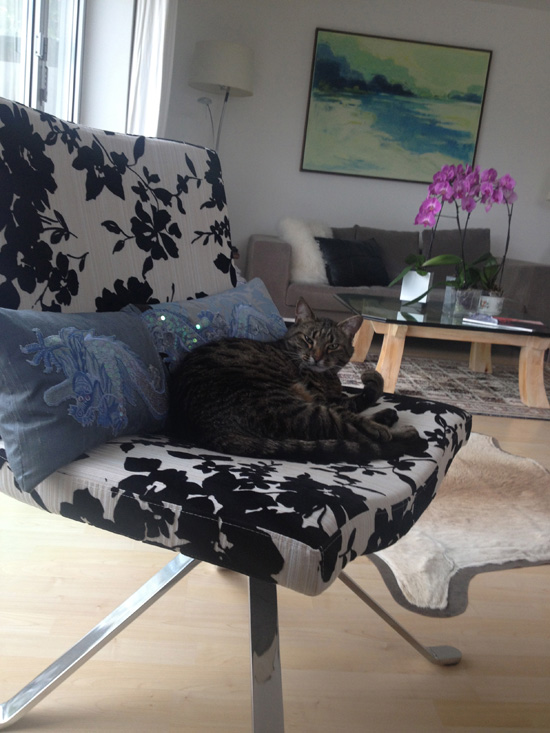 We found Buddy rocking in a chair at the seafood shack “down the (Jersey) shore”. He would rock a while, then stop to watch the customers buy clams or crabs or whatever it was that wasn’t Pupperoni. Then he’d go back to rocking. Buddy.
– Priscilla 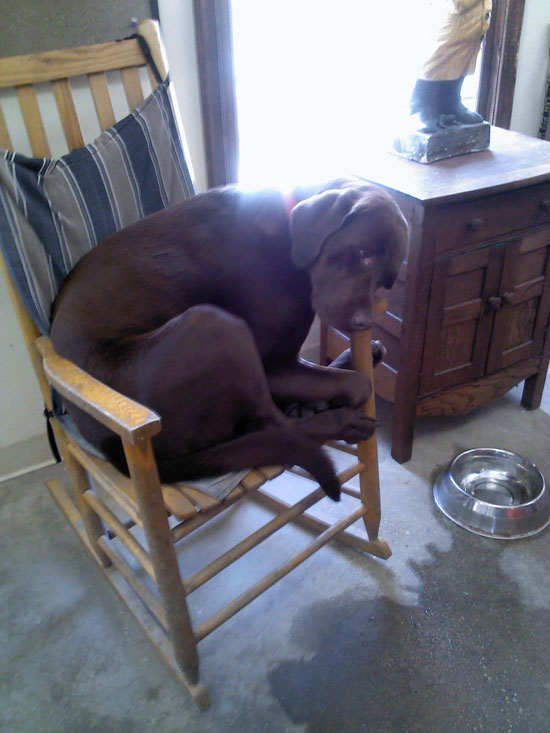 Pictured is Cameron, our foster dog. We call him the Silver Fox (kind of like George Clooney). He is hanging out on our Lafer-esque sofa that we scored off Craigslist, enjoying life. Cameron was “born wild” or on the mean streets of St. Louis and lived as a feral dog for five or so years until he was humanely caught and rehabilitated by Stray Rescue. He was then adopted to a sweet retired lady. They hung out together for two years before he came back to the rescue — it turns out his lady had Parkinson’s Disease and had to move somewhere where she could get more care (and no dog’s were allowed). So we have ended up with Cameron as our foster dog. He is about 9-1/2 years old and in great health except some arthritis in his back hips. You can see his full bio on Stray Rescue’s website. Cameron is super sweet and we love having him around but I’m also hoping he can find his forever home soon so they can enjoy a lot of time hanging out on the sofa with this guy.
– Courtney 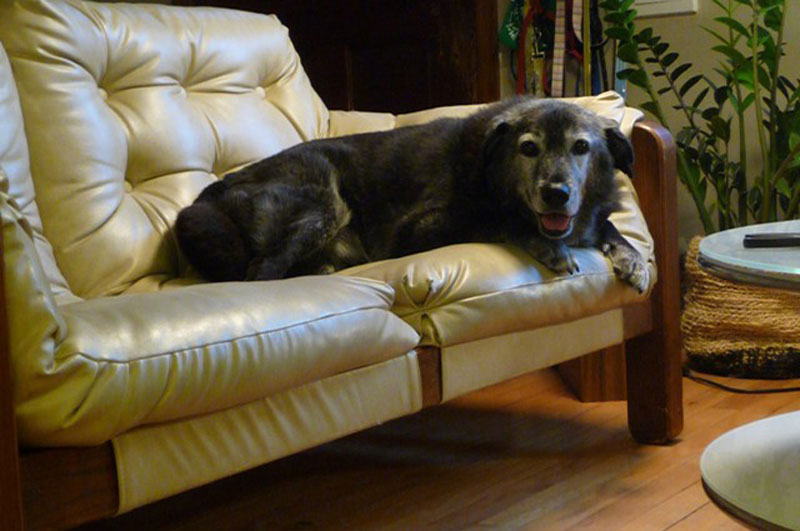 These are my daughter Hayley’s dogs-Rhonda and Howard with the new chair (from Anthropologie.)
– Christy (Visalia, CA) 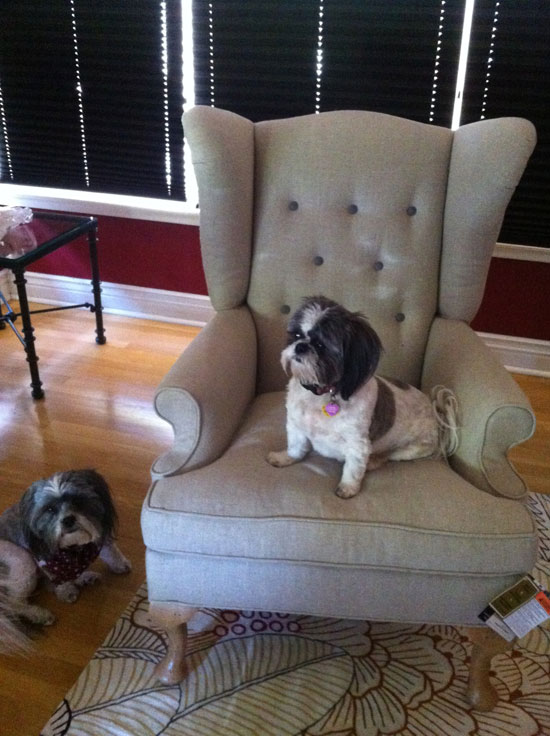 This is a tribute to Edgar, the 7th cat who joined my family only a few years ago and who left such a memorable impression that I’m already tearing up writing this. By sharing Edgar’s story I am not so much doing this in his memory, but for all the cats and dogs out there roaming the streets who just so desperately want a home and to be loved. That’s all Edgar ever wanted, and that’s what he got, right up until he died Saturday afternoon. And if anyone out there is in a similar situation where you are able to give a stray animal a home, I hope this is what it takes for you to make the right decision.

Edgar started hanging around my house in July 2009, a time when I had several stray cats I was feeding and trying to figure out what to do with. Edgar was TERRIFIED of people. I would leave him some food across the yard and if he even so much as spotted me peeking through the corner of a window he’d take off like a shot. This went on for a few months. I did manage to capture a few photos during this time. 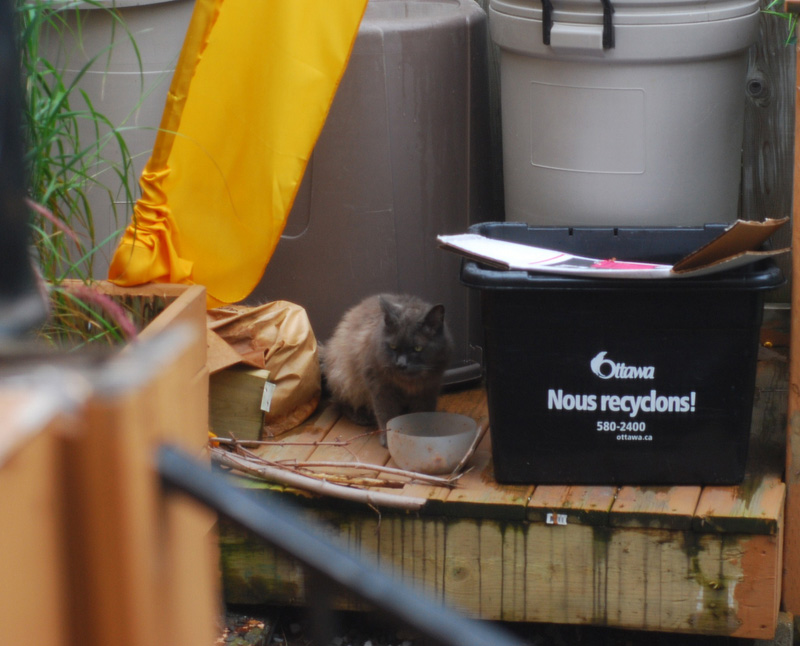 One day 3 months later I took one of my strays, Seymour, to the vets to get fixed up so I could find him a home – but he didn’t come home with me. Turns out he had severe FIV and was put down. When I returned home totally devastated, I sat in the backyard and cried. After a few minutes I could not believe my eyes when I looked up to find Edgar sitting on the deck with me. I reached out my hand and he came over and let me pet him. I even managed to go inside and get my camera to document this unbelievable turn of events. 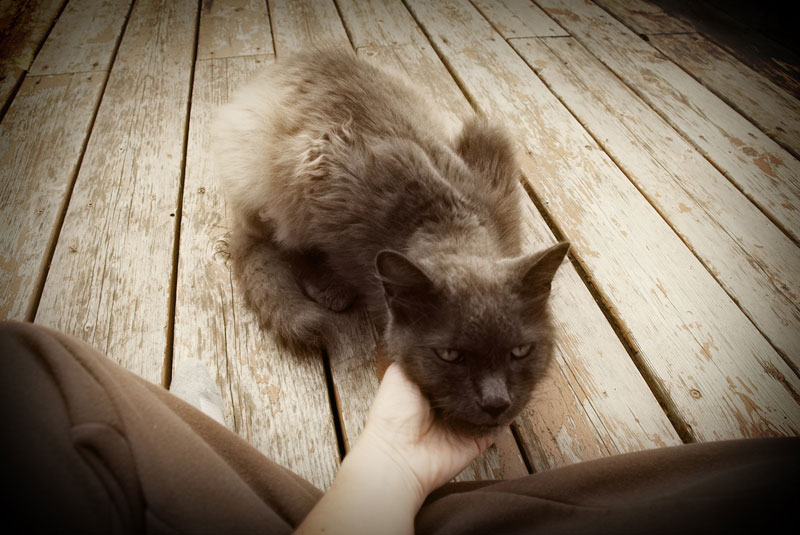 After a while I figured he’d go off gallivanting around the ‘hood as per usual so I went inside. And this is what happened for the next day or so. He sat at the door and howled. 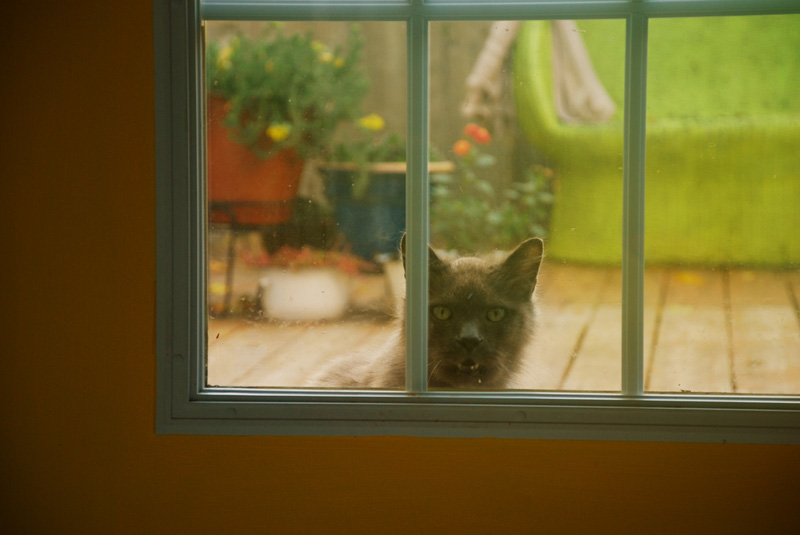 Of course, that was the end of Edgar as a stray. I took him to the vet and found out he was neutered, between 9-13 years old and had bad kidneys. Due to the fact that he wasn’t healthy and pretty old, I was stuck with him. It didn’t take long for me to realize how grateful I was that he became my 7th cat. He turned out to be a big baby, who loved me so much. He followed me around the house, was always under my feet or in my lap. And WOW did he ever love snuggling up against my husband and I under the covers on cold nights. (It’s going to be a cold winter this year we keep saying 🙁 ) Not only did he have the best personality, he was one of the most bizarre looking cats I’ve ever seen. We used to say that he was half wolf, half human. He had legs that were abnormally long, and huge paws. And fur that was really fluff, in about 10 different shades of grey. 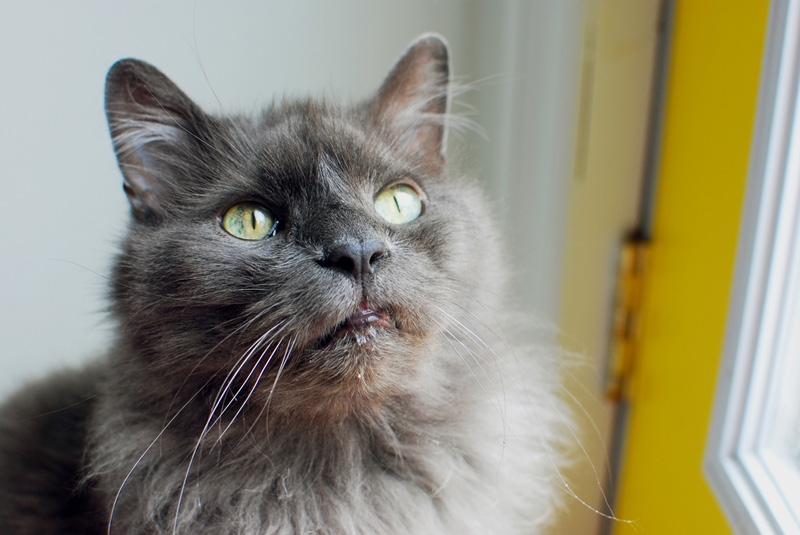 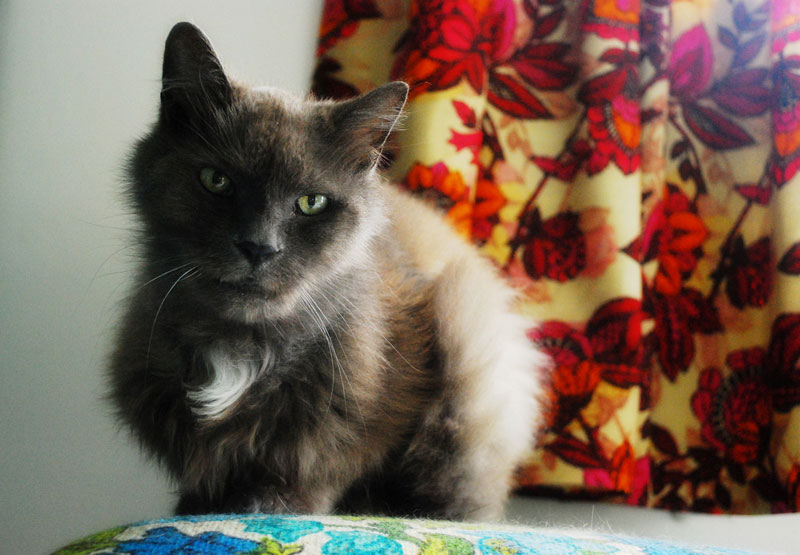 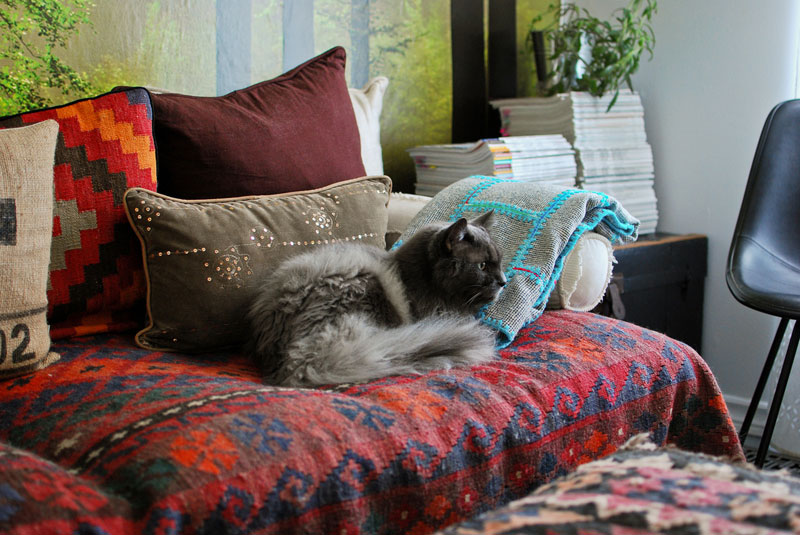 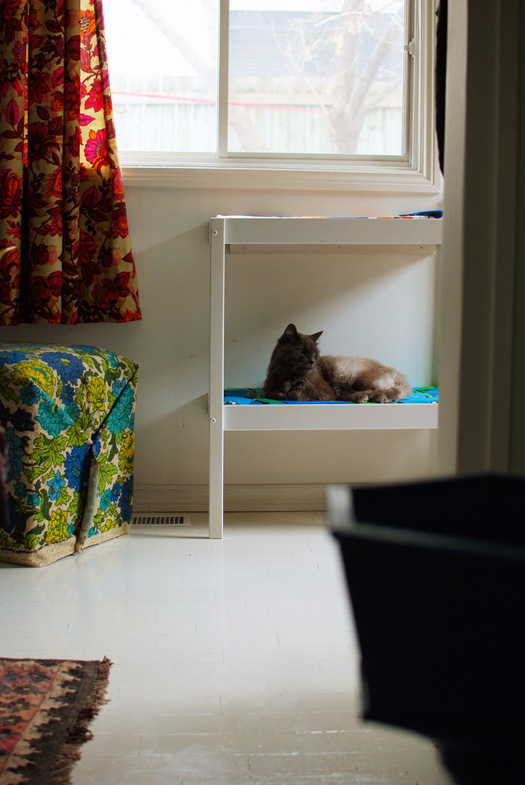 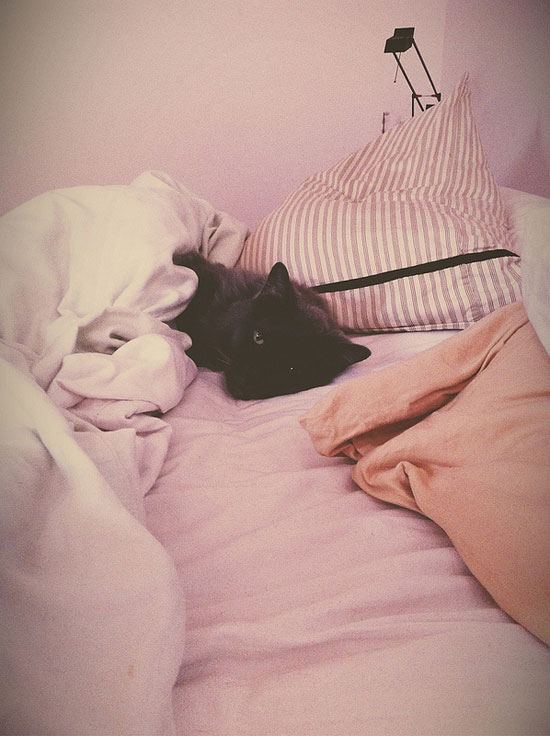 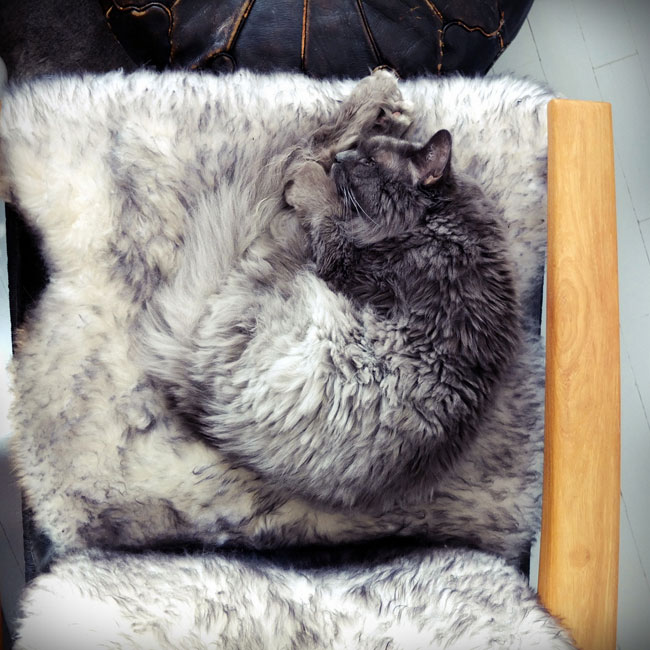 He developed arthritis the past year or so and it got very bad recently, particularly in his hips, so my husband and I knew it wouldn’t be long before we would have to make the decision to put him down. But since about Thursday things took a turn for the worse, and Edgar gave up. You could see it in his face. There was nothing in his eyes. Friday morning I knew something had to be done so I emailed the vet and was told she could come by Saturday after the clinic closed at 4 pm. He got worse and worse each hour and I sat in the bathroom with him (he decided that was where he wanted to be) and told him I loved him and to just go. I am devastated that he ended up in pain and suffering, especially the last couple of days. Edgar passed away around 2:30 pm Saturday, before the vet could come. It was hard to see him go, but we knew it was for the best. I just can’t get the images out of my head of Edgar, dead, but still breathing. That was what it was like for the last 2 days of his life and I am so sorry I couldn’t/didn’t do anything early enough to spare him from all that suffering. I’m trying to focus on the fact that he was able to spend the last few years of his life in a loving home.
I have a Flickr set dedicated to each of my cats, and this one is Edgar’s if you would like to see more photos (including some from his final days, which I can’t bring myself to include in this post). There are even a couple of iPhone videos of his antics. (Edgar was a hoot).
Edgar, we love you buddy. It will never be the same without you, and I know I will never again come across a cat like you. You were so special, and thank you for loving me, and letting me love you.

Beautiful, moving story. I've cried a lot reading it. Meeting you certainly was the best thing in Edgar's life!

Oh my goodness! What a beautiful history you guys have, such a lot of love between you all. It's so very sad to say goodbye, I know that pain all to well. But as an outsider reading your story, gee I'm glad your paths crossed xx

So sorry for your loss. Edgar was such a handsome kitty and clearly a special spirit. Wishing you peace and healing.

There are few things in life as painful as a loss of a loved one. Especially a loved one that asked for so little in return. Thank you for giving handsome Edgar peace and love in the last few years of his life. There's nothing anyone can say that will make this any easier right now, but please don't dwell on the last couple days. He knew you were there. He may have been in pain, but he was surrounded by those he loved, and he was safe and warm. I've been in your shoes. I'm a sobbing mess right now remembering well those days following the recent loss of our boy Jack. Take comfort in the fact he is no longer uncomfortable or in pain, and that his most recent memories are of love and security. I'll hug my own pets a bit closer today and think of Edgar.

How lucky Edgar was to be so loved!

I'm so sorry for your loss – thank you for sharing your sweet memories of Edgar with us!

I remember following the whole story of Edgar, hiding him out in the bathroom from all the other cats, getting the mats out of his fur, and his strangely mesmerizing human-like face. I was tearing up reading your story just now after tearing up only a few days ago reading about it on Flickr. You know how I love your cats, every stinking one of them. I am so sorry for your loss and know that Edgar was comforted by having you by his side at the end. That's what HE knew, remember that…that a person he loved was with him when he left this world…deeply loved. Take care.

I'm so sorry that you are going through this loss. The postings of your cats, or other strays you have previously mentioned are always such an inspiration…even if I'm brought to tears. I completely understand the emotions of loosing a cat that is in pain. I also had a situation where I couldn't get my cat to the vet (it was over a holiday) and sat on the bathroom floor with her. I was afraid to pick her up because of the pain she was in, but she didn't let go until I held her. I am so grateful I was there for her, but so sorry for the way she had to go. Sometimes they need those loving words or the contact. Edgar's story and photos are so beautiful. Thank you for sharing.!

It's happened the same story to me…. I'm Italian and I'm not able to write a good English, but I'm cryed reading your post about Edgar.
It was the same story of Romeo…….and every time I say his name, I cry again.

I will never found a cat like him. lucky us to share with them a part of life.

what a gorgeous cat, in every way possible