Sorry dear readers who tune in Mondays in the hopes of finding photos of adorable pets lounging on furniture, but I think this is going to be the last post of this series. I have been doing this for many years now, and submissions have been decreasing to the point where it seems like I should probably call it quits. I had a great time getting to know your pets and the photos have been awesome, a bright light on an otherwise dreadful start of each week. Thanks to everyone who has participated over the years.

This is Lola. She is a five year old Pug from The Hague Holland. She likes to hang out and watch people on the street on top of my blue vintage Chesterfield couch.
– Rick 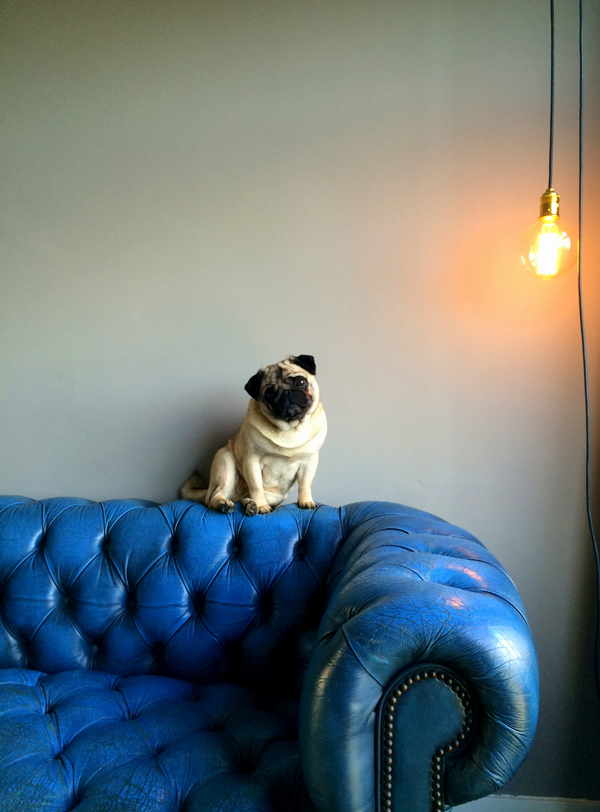 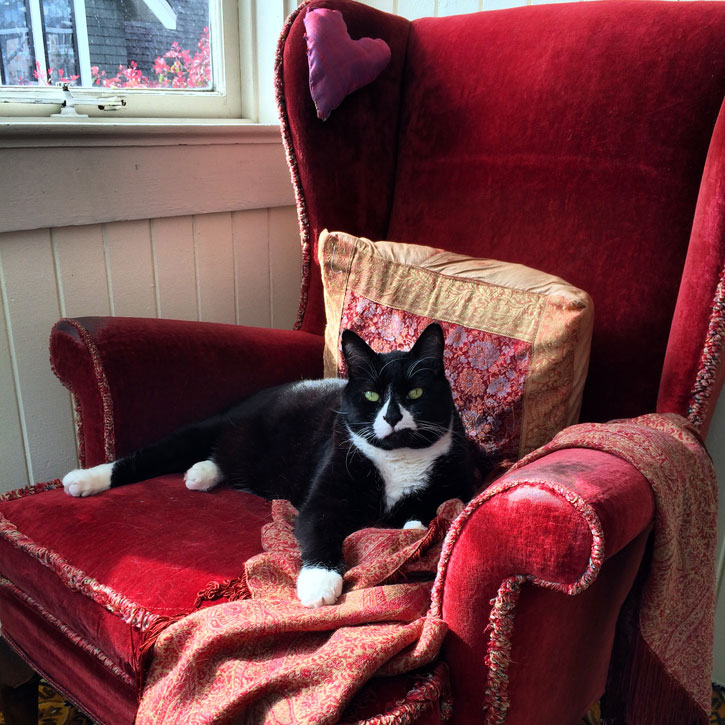 This is Barney, one of our four “kiddens”. All are rescues. Barney found us on a very hot July day, under the porch of my husband’s family home in south Alabama. We love him so much!
– Gail (Birmingham, Alabama) 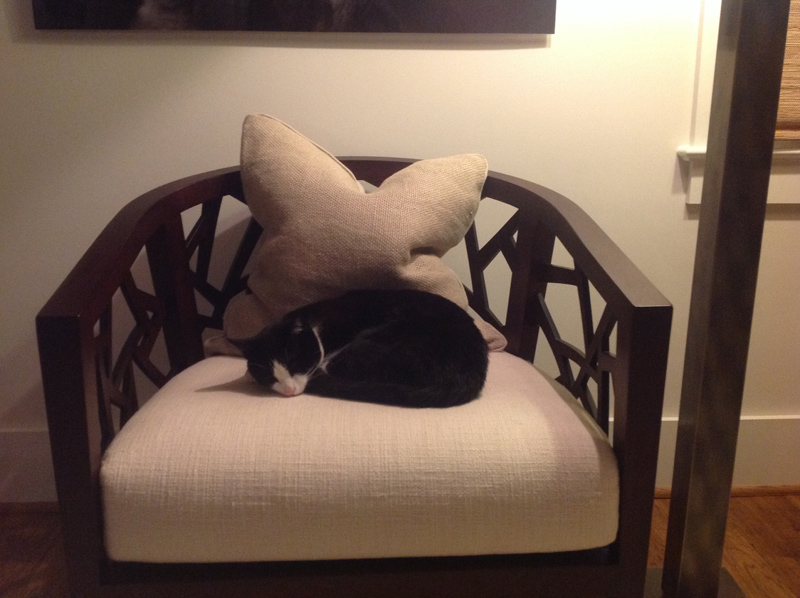 Here are a couple I took a few weeks ago, coincidentally both cats caught mid-yawn… 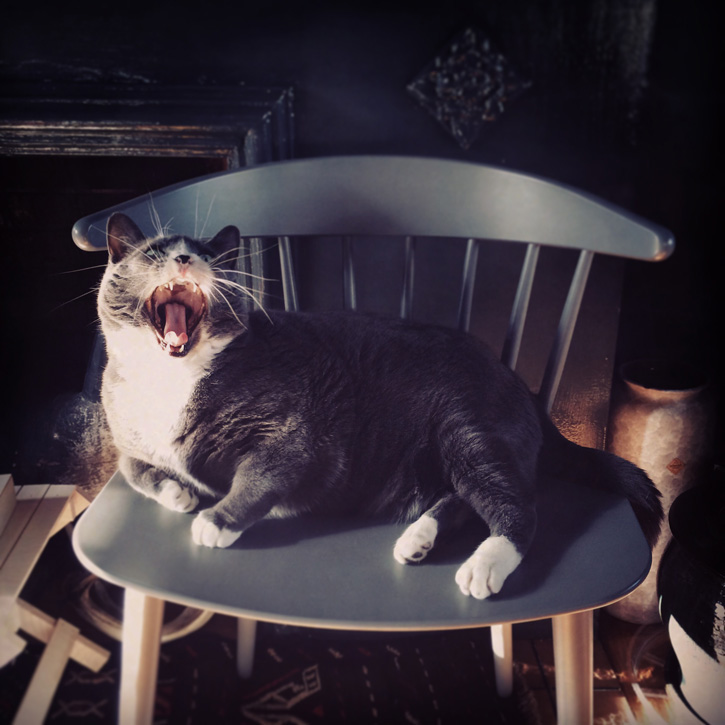 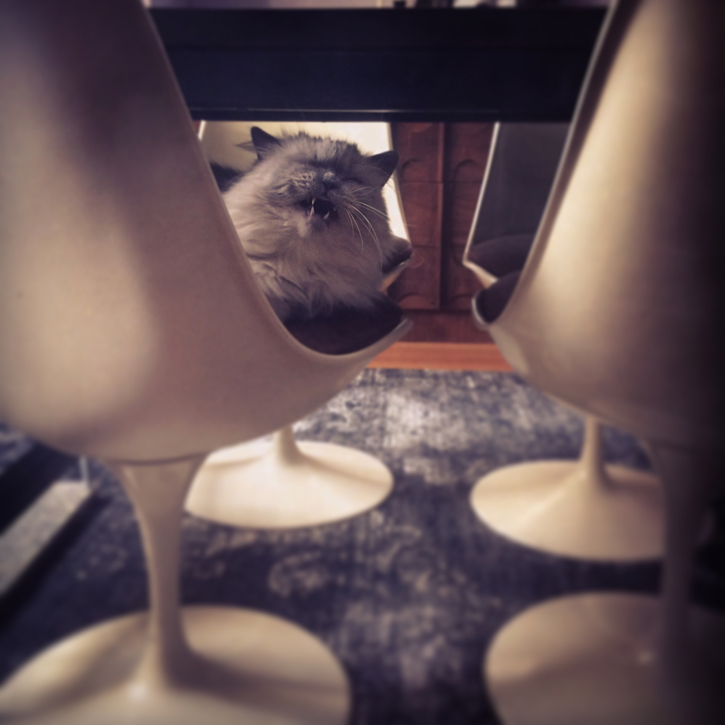 And a quick update about my 3 feral kitties. They’re doing well…it is a slow process but they are noticeably less stressed by my presence. I have faith in Georgie, Frankie and Bernie that they’ll become big affectionate babies like my other 5, and will be perfect adoption candidates. 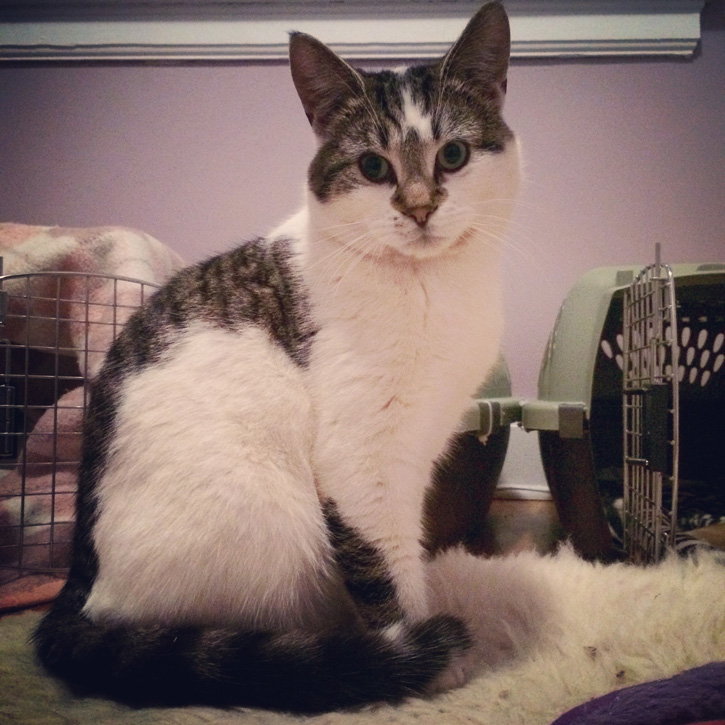 Georgie, the last cat we rescued, and the shyest pre-rescue, to my surprise was immediately the boldest one post-rescue. I had to back up a bit to get this photo, that’s how close she/he was to me here. So freaking cute, it’s killing me to not be able to squeeze the crap out of them. 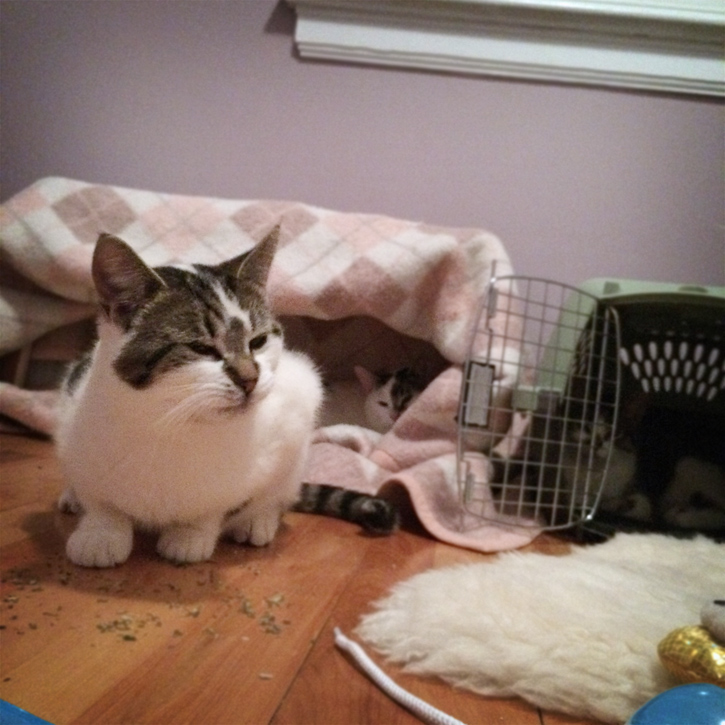 Georgie loves catnip. It is a tool I plan to use to drug them all so they won’t know the wiser. 😉 Look closely and you’ll see all three. 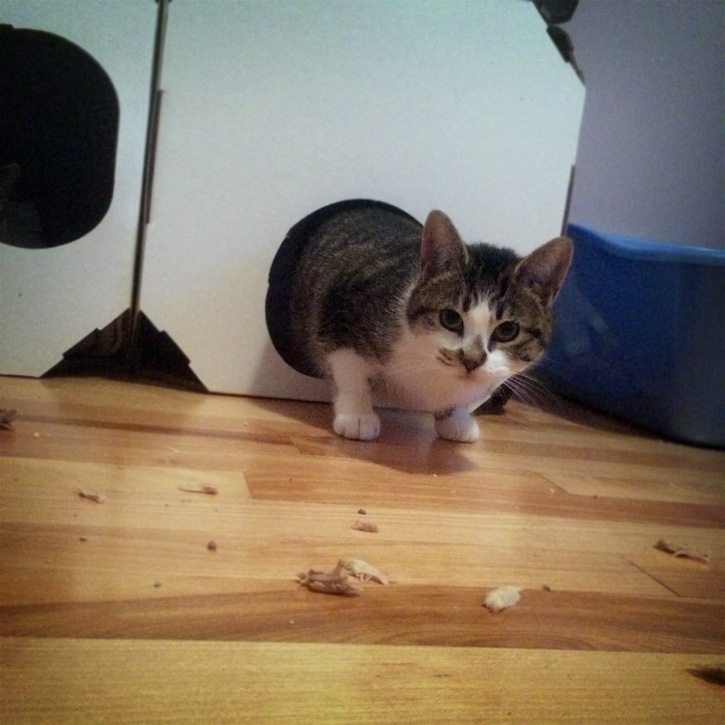 Bernie was the friendliest outside, who had let me pet her for a couple of months before the rescue. She’s not really into being touched now that I have ruined her life, and that breaks my heart. But she’ll do just about anything for chicken. She came out of the cardboard structure after I snapped this photo and ate with me right there.

I'll second Susan's idea of a coffee table book – I'd buy it! Thanks, Kim, for your work – Mondays have been brighter with Pets on Furniture. Wilson and Cotton also thank you for posting their pics!

That's so sad. I follow a lot of animal rights type blogs – so many heart-rendering stories. I loved this feature because it showed the compassionate side of humanity (many rescue pets living wonderful lives). Not to mention, glimpses of beautiful homes and laughing at funny stories. Just reading the names of pets made me smile. And I teared up plenty of times while reading about pets who passed away. Thanks for putting it all together and to all the pet parents who participated.

I'll miss it too. Margaret's idea is great!
I used to visit the catorialist (http://thecatorialist.blogspot.fr/) but there isn't new photographies anymore 🙁
Good luck with your pets!

Thanks to all for the great posts, I really look forward to them each week. And you never know – perhaps it will return with a vengeance after a short break. Meanwhile, a dig through the archives definitely sounds in order.

Oh thank you so much Kim for your efforts with the pets. Always enjoyed and always looked forward to Mondays! But understandable. Please give us updates on your little feral kitties from time to time. Your effort and love towards this creatures are commendable most assuredly. Stay well Kim and thank you for the pleasure you bring with your blog.

An important part of my week, MPOF was always interesting, visually and literally. It always made me feel better about the 3 cats and dog that litter my house and make it a home. Yes, run the archives, but throw a few new ones in there too!

Oh so sad to see pets on furniture go, perhaps you could re think and aim for the first Monday of each month, keeping fingers crossed. My dog Scruffie made it on to Pets on furniture he died last year and I now have a new dog I have taken at least a dozen photo's of him on furniture but none seemed good enough to make the cut to be on your site I was aiming high even dragging a step ladder downstairs to get a better shot as I consider it an honor to be chosen for your site.

Either way I love your blog it's number one on my list. Thanks for all the time and effort that you and Jo put into it.

Now I am even more bummed to have ended this series. 🙁
I do hope it will return with a vengeance – but you animal lovers need to send me submissions!!! (kim[@]desiretoinspire[.]net)
(I had thought about doing a book for years, but with 2 jobs I just never had the time to seriously consider it)

Hello,
time difference meant I would discover your MPOF on Tuesday morning but nevertheless it was what I needed to help me go through a tough day at work.
very sorry to read about this ending.
thanks a million for helping the lovely trio of homeless cats !
keep well
m