If you would like to participate in the Monday’s pets on furniture series please send photos, your name, location and a brief description to kim[@]desiretoinspire[.]net. Thanks! 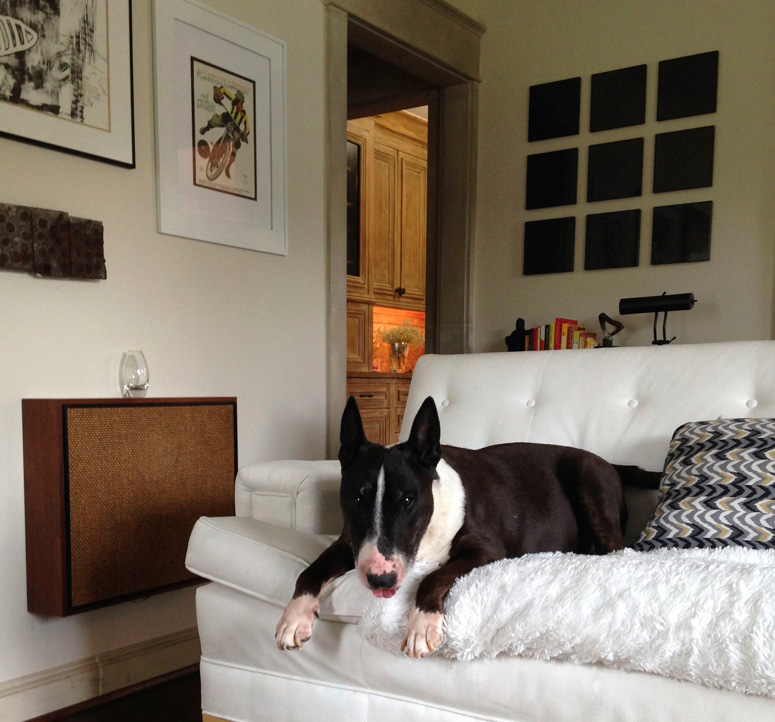 This is Mouse. He’s a four year old nebelung, grey, long-haired cat. We live in Somerville, Massachusetts, U.S. It’s the town next to Cambridge and Harvard University. We love it here and Mouse loves an unmade bed, a patch of sunlight, and his cardboard ice cream truck.
– Pascale 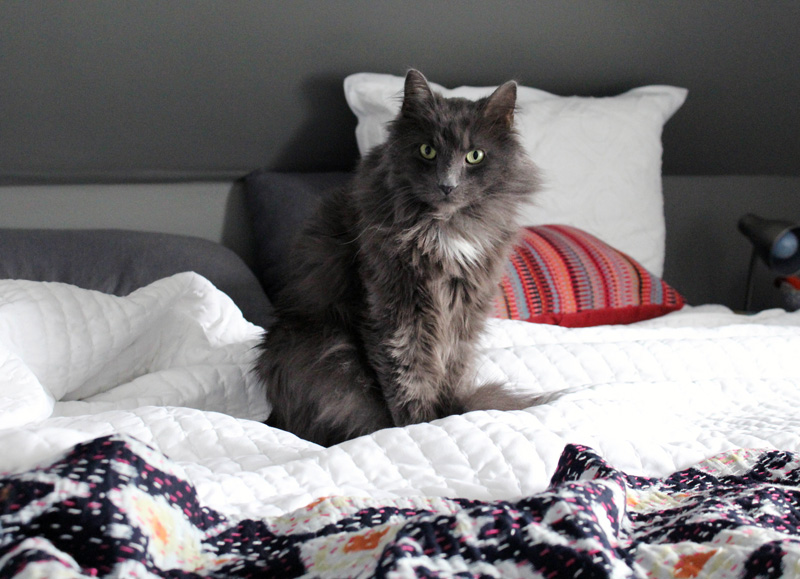 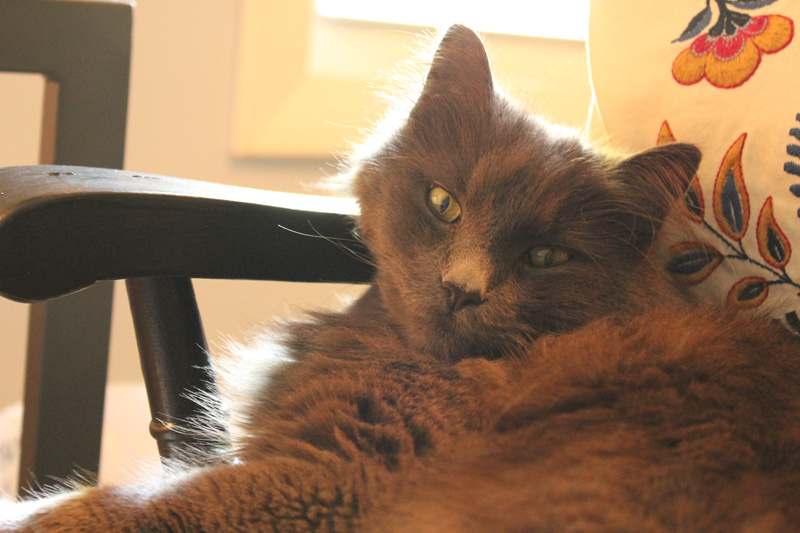 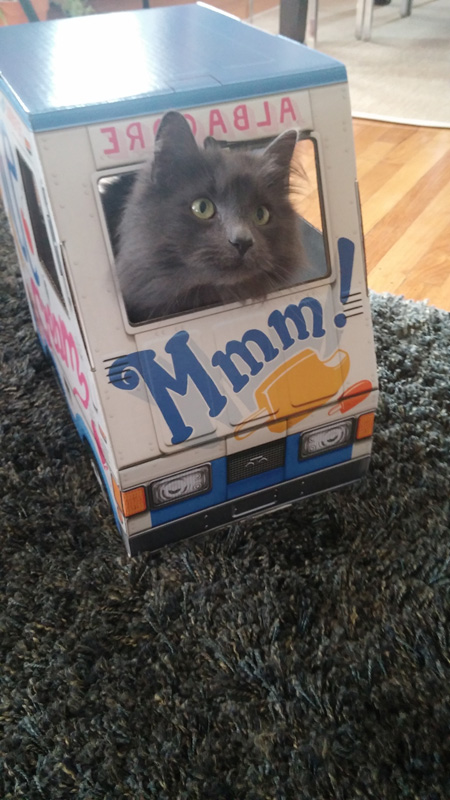 (Kim: This entry almost made me cry. Mouse looks exactly like my Edgar, who passed away in 2013. He’s at the end of this post. Ok now I am crying after finding that tribute post 🙁 )

This is an obviously-posed photo of Dude on a chair. In September, 2014, he and his brother, Duke, were left in a cardboard box in front of a no-longer-in-business pet store. One month later, we found Ditto living under our front steps. Before we took each boy to Northwest Spay & Neuter, we took photos of his little nuts. Framed in dollar store frames, we’ve posted the photos low enough so they can see them on the way to the food dish. From left to right, Ditto, Duke, and Dude.
I do have a question about the chair. I bought four at auction. None have a maker’s mark but one has a sticker on the bottom from an Italian moving company. I haven’t seen a chair like this on the Internet. I’m sure they aren’t Arne Jacobson’s but by someone who was influenced by his designs.
– Suzanne Elk Plain, Washington 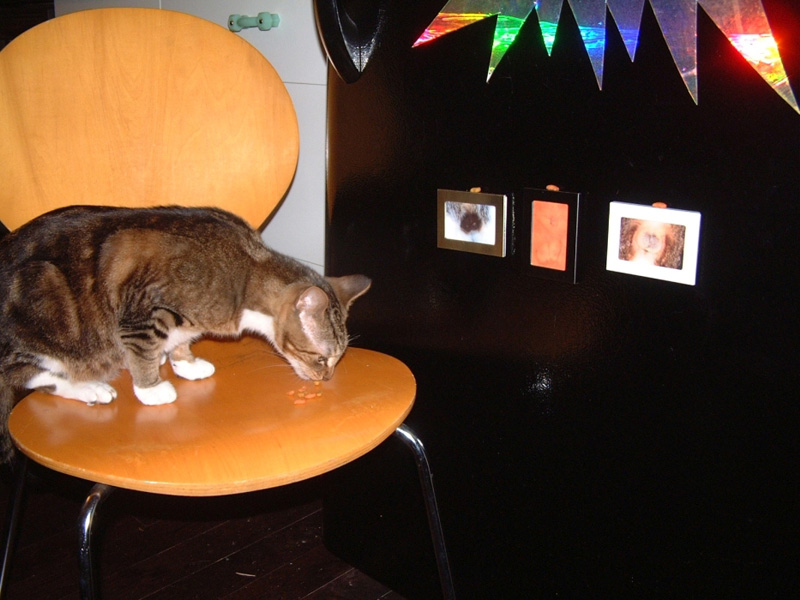 This is my amazing border collie Bodhi and his good buddy Astro – they are both rescues but you would never know it. They feel completely entitled to the good life!
– Jennifer (Santa Barbara) 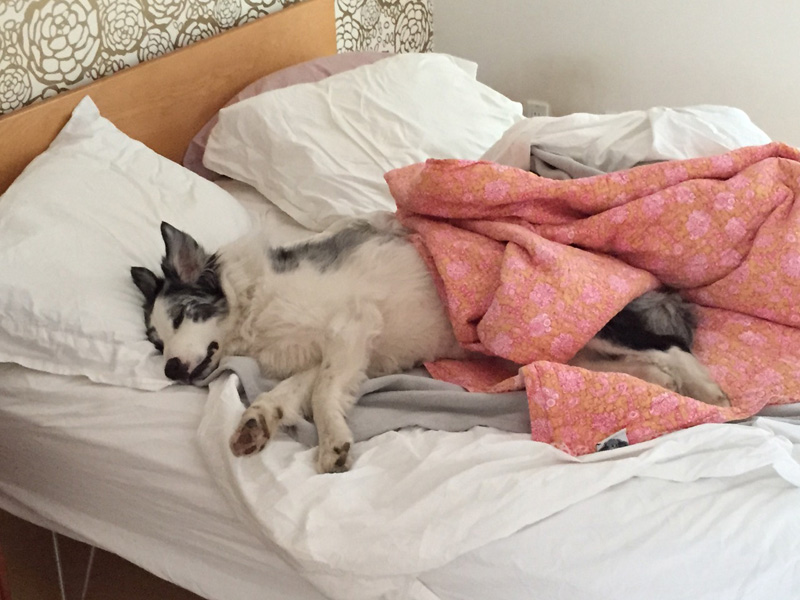 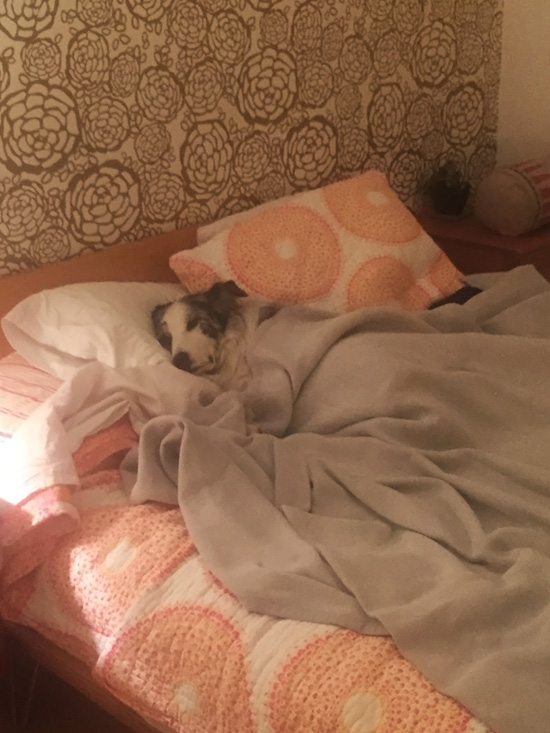 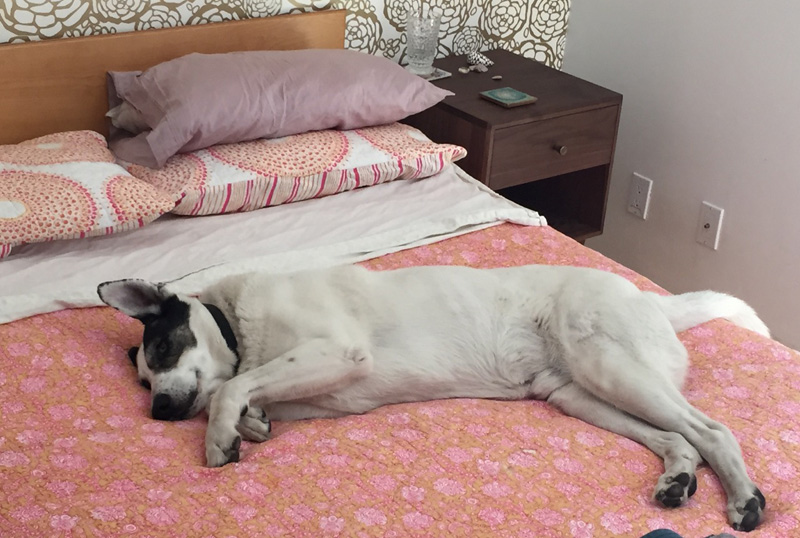 First two are of our newest addition to the family: Mr. Meatball. Of origin unknown…breed? part unicorn, part manatee, part potbelly pup, and the remainder is most likely a grandpa doggy. Full of love and bad hips…and lumps…and allergies. And we love him to the moon and back. He has to have a set up that allows him to get onto chairs and coffee tables…hence the ton of ottomans around his areas. Doesn’t look glamorous but we don’t mind! Last shot are Farrah Fawcett (aka Fat Bastard…like in the Austin Powers movie, not as an insult) and her son, Sydney (grey kitty). The are in the same sun room as the pup.
– Pam 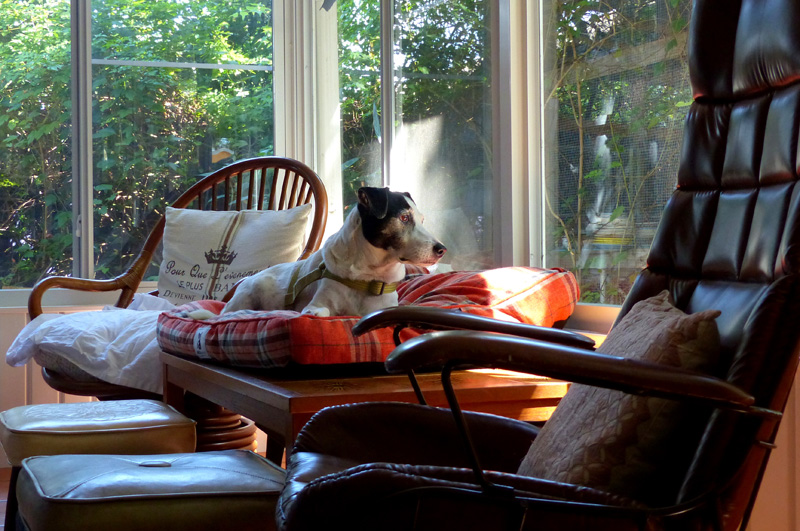 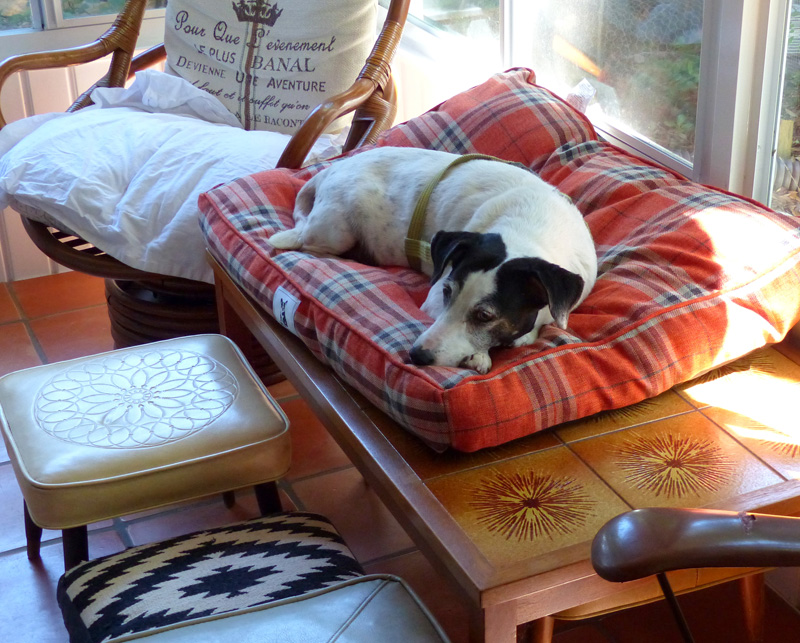 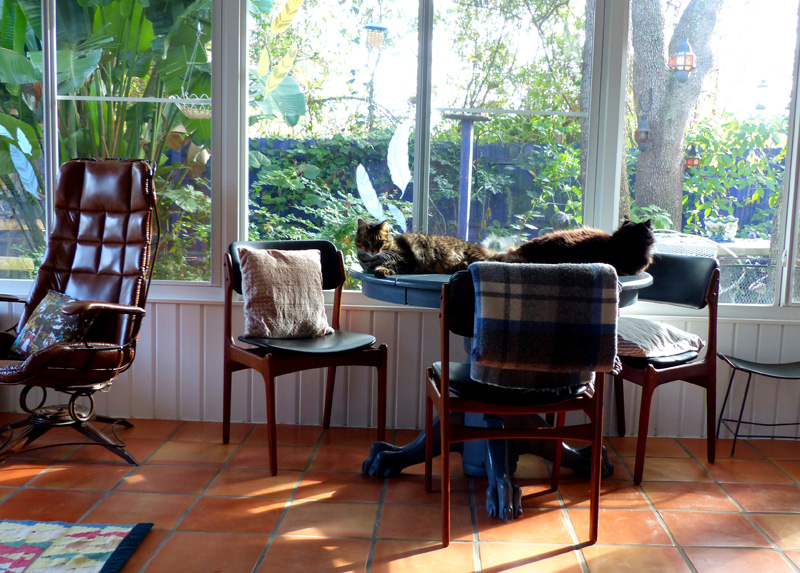 Took this photo yesterday afternoon while I was trying to get my damn corporate taxes done. Getting a shot of former-feral Frankie sitting all cute on my Hay Denmark J104 Chair from The Modern Shop was all the distraction I needed. 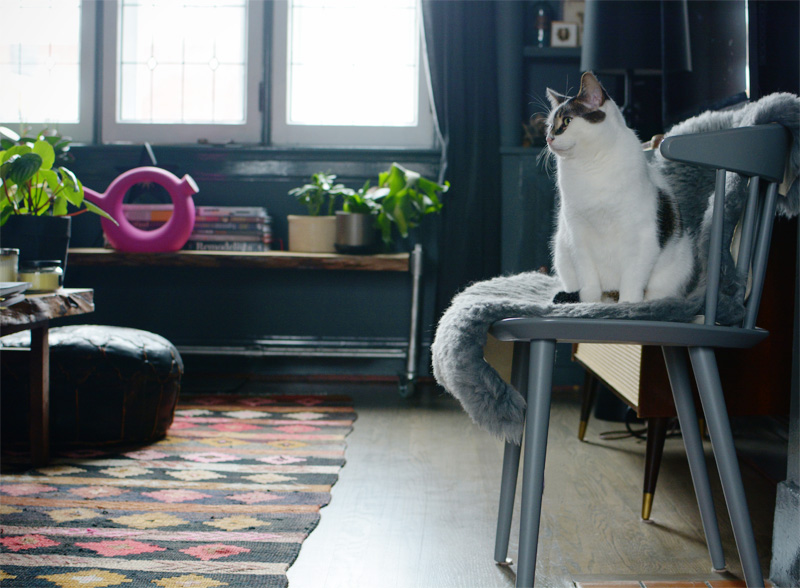 Thank you for posting our beloved Mouse in your Monday's Pets on Furniture feature. I thoroughly enjoy visiting your blog daily to get my design fix. Keep up the fantastic work!!!

Dear Kim, Meatball says that it was an honor just to be nominated 🙂 Love them all but particularly your last shot of Frankie…thank you for lifting our spirits every Monday! (well, everyday, really, but Mondays are extra special for me!)

Love love love these posts, especially the rescues. Warms my heart. Animals and interiors, what better combination is there?.

Awww! Thank you all for sharing your pets with us- as always, a beautiful bunch of charmers!

Dear Kim I just read your story about Edgar, I can not else then cry now. Thank you for giving him dream home and such a beautiful last years.